Although a vegetarian diet has many health and environmental advantages, some people worry that they will get insufficient protein in their diet if they exclude meat. But to produce 1 pound of protein in the form of beef or veal, we must feed 21 pounds of vegetable protein to the animal (not to mention gallons of water). It may be that the amount of protein lost to humans in this way is equivalent to 90% of the annual world protein deficit. In the contemporary US it is virtually impossible to suffer protein malnutrition no matter what our diet (we generally eat a huge excess of protein), but in some poorly developed nations certain vegetarian diets may not supply enough protein, even though they provide enough calories, and diseases like kwashiorkor are common. There is animal evidence for increase in disease when single amino acids are deficient [1].

Nutritionists look to chemists to explain protein deficiency in terms of amino acid composition of foods and "Limiting Reactants". When a limiting reactant is used up, the other reactants, no matter how plentiful they are, have nothing to react with, so the reaction ceases and the left over reactants are wasted.

Human proteins are complex polymers ("polypeptides") made by joining about 8 essential amino acids that our bodies can't synthesize (and aother 12 that our bodies synthesize) in particular orders that define the activity of a protein (which may be an enzyme, a structural body component, or serve many other functions). Molecular structures of two essential amino acids, lysine and tryptophan, are shown here. Show two ways that one lysine molecule and one tryptophan molecule can combine via a peptide bond.

Solution In the figure showing the formation of a peptide bond, we see that two amino acids are different only because they have different "R" groups. The "R" group of lysine is -CH2CH2CH2NH2, and that of tryptophan is -CH2C8H6N (with the fused 5 and 6 atom rings). It's always the terminal acid (-COOH) and alpha amino acid (-NH2 on the adjacent carbon atom) that react to form the peptide bond. If we replace "R" on the left amino acid with -CH2CH2CH2NH2 it becomes lysine. Replacing "R" on the right amino acid with -CH2C8H6N we get tryptophan, and the amine (-NH2) group of tryptophan bonds to the acid group (-COOH) of lysine. If we switch the "R" groups, then the amine group of the lysine on the right will bond with the acid group of the tryptophan on the left to make a different dipeptide.

We can understand why a vegetarian diet with plenty of calories could cause protein malnutrition by imagining simple vegetable proteins that contained only two amino acids, lysine (abbreviated LYS) and tryptophan (TRP), which are consumed by a person and must be used to make human protein. This example is highly simplified to demonstrate a principle; the actual synthesis of human protein from vegetable is much more complex.

A legume food provides 100.0 g of and 100.0 g of tryptophan, but the Human polypeptide requires equal amounts of each. Which is the limiting reagent?

But suppose at the same time that the legume was consumed, a serving of wheat was also consumed that provided 140 g of TRP and only 71.5 g of LYS (wheat is notoriously low in LYS, just as legumes are high in LYS). Now

Now there is 0.196 mol of TRP left over from the wheat protein, exactly enough to react with the excess LYS from the legumes, and no amino acid is wasted! Thus wheat and beans are complementary sources of protein, and if eaten together, provide optimal nutrition, as shown in the diagram below, where the deficiencies in each cause neither to be fully utilized, but when eaten together, about equal amounts of the four amino acids are provided, which leads to essentially perfect stoichiometric ratios for synthesis of human protein. 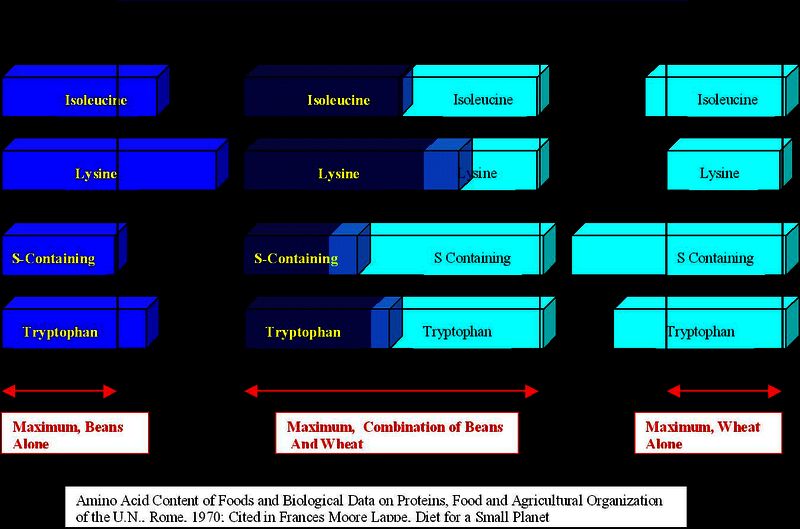 In order to design a proper diet, complementary protein foods would have to be chosen from tables of amino acid contents of foods. Some anthropologists notice how often diets of complementary foods show up in different parts of the world (i.e. tacos and beans), and attribute the society's survival value to their choice of food.

From the legume example you can begin to see what needs to be done to determine which of two reagents, X or Y, is limiting. We must compare the stoichiometric ratio S(X/Y) with the actual ratio of amounts of X and Y which were initially mixed together. In Example 1 this ratio of initial amounts

was greater than the stoichiometric ratio

This indicated that there was not enough TRP to react with all the LYS and TRP was the limiting reagent. The corresponding general rule, for any reagents X and Y, is

To detect an amino acid (even in a fingerprint in forensic chemistry), the ninhydrin test is often used. In the ninhydrin test, two ninhydrin molecules (C9H6O4, shown to the left) become linked by the N attached to the first carbon of the amino acid chain, producing the blue/purple ion shown below.

The balanced chemical equation is:

If 2.00 mg of ninhydrin (Nin) is used to detect 2 mg of TRP, has enough ninhydrin been added to react with all the TRP? Which is the limiting reagent, and what mass of H2O will be formed?

The stoichiometric ratio connecting Nin and TRP is

Since this ratio is smaller than the 2:1 stoichiometric ratio, you have insufficient Nin to react with all the TRP, so Nin is the limiting reagent. To ensure detection, in would be better to add excess Ninhydrin.

b) The amount of water product formed in a reaction may be calculated via an appropriate stoichiometric ratio from the amount of a reactant which was consumed. Some of the excess reactant TRP will be left over, but all the initial amount of Nin will be consumed. Therefore we use nNin (initial) to calculate how much H2O can be obtained

From ChemPRIME: 3.2: The Limiting Reagent