Natural uranium contains 0.7205% U-235, the fissile isotope of uranium. The remaining mass includes 99.274% U-238 and a small amount of U-234 (0.0055%). Uranium-238 does not contribute to slow neutron fission; however, it can react with neutrons to form a fissile isotope of plutonium, Pu-239. Thus U-238 is known as a fertile material, i.e., one that can produce fissile materials. Although U-235 and U-238 are chemically identical, they differ slightly in their physical properties, most importantly mass. This small mass difference allows the isotopes to be separated and makes it possible to increase (enrich) the percentage of U-235 in uranium. Most civilian power reactors use enriched uranium fuel containing 0.8 to 8.0% U-235, known as low enriched uranium (LEU). Weapons grade uranium must contain highly enriched uranium (HEU) with an isotopic concentration greater than 90% U-235.

In producing U-235 for the first atomic bomb, Manhattan Project scientists considered four physical processes for uranium enrichment: gaseous diffusion (effusion), electromagnetic separation, liquid thermal diffusion, and centrifugation. During the project the first three were employed at Oak Ridge to produce enriched uranium for the bomb used at Hiroshima. Centrifugation was abandoned because the technology and materials required to spin corrosive uranium hexafluoride with a rotator at high speeds were not practical for industrial, large-scale separations. However, advances in technology and materials make centrifugation the preferred method of enrichment today.

The gaseous diffusion process is based on molecular effusion, a process that occurs whenever a gas is separated from a vacuum by a porous barrier containing microscopic holes (Figure 1). The gas flows from the high-pressure side to the low-pressure side: it passes through the holes because there are more "collisions" with holes on the high-pressure side than on the low-pressure side. Thomas Graham, a Scottish chemist, observed that the rate of effusion of a gas through a porous barrier was inversely proportional to the square root of its mass. Thus lighter molecules pass through the barrier faster than heavier ones. The ratio of times it takes the same amounts of two gases, A and B, to effuse through a barrier is

This is known as Graham's Law of Effusion. Uranium hexafluoride (\(UF_6\)), a gaseous compound of uranium, is used in this process. Since there is only one common isotope of fluorine, F-19, the ratio of rates for the uranium hexafluoride from the two isotopes becomes

This small difference in rates means that many effusion barriers (stages) are necessary for enrichment by passage of the enriched stream through successive stages. The K-25 gaseous diffusion plant at Oak Ridge, Tennessee contained 4000 stages. This plant, built during World War II, was one-half mile long, six stories high, and covered 43 acres (Figure 2). The production of a suitable barrier material was the key to successful separation. The holes in the barrier must be microscopic (approximately one-millionth of an inch in diameter) and uniform in size. Its porosity must sustain high flow rates, and it cannot react with the highly corrosive hexafluoride gas. Nickel and aluminum oxide were found to be best suited for barrier materials. Diffusion equipment is large and consumes significant amounts of energy. The entire system must be leak free; no air can be allowed in and no uranium hexafluoride allowed out.

The electromagnetic isotope separation (EMIS) process is based on the principle of a simple mass spectrometer, which states that a charged particle will follow a circular path when passing through a uniform magnetic field. Thus, uranium tetrachloride chloride ions containing U-235 and those containing U-238 with the same charge and kinetic energy will have slightly different paths when moving through a magnetic field. The radius of the path traversed by the heavier U-238 ions will be larger than the radius of the path of the lighter U-235 ions. This allows for the separation and collection of the isotopes in receivers (Figure 3). EMIS units, known as "calutrons", were operated in the Y-12 area of Oak Ridge. Because EMIS is a batch process, with each unit requiring a long time to produce small amounts of U-235, many units were used to produce the first fissionable uranium. Uranium ions for the EMIS are generated by heating solid uranium tetrachloride, \(\ce{UCl4}\), to produce a vapor that is then bombarded with electrons to produce positively charged ions. There was a major problem with this process: less than half of the original U-235 was collected in the receivers. The rest was scattered throughout the calutron and was difficult to recover. At Oak Ridge, two groups of calutrons were used to produce weapons-grade uranium. The first group, or alpha calutrons, enriched uranium (7.0% U-235) from the gaseous diffusion plant to between 12 and 20% U-235. The second group, or beta calutrons, took the alpha product and enriched it to approximately 90% U-235 (weapons-grade uranium). As difficulties with the gaseous diffusion process were overcome, the EMIS process was phased out.

Thermal diffusion uses heat transfer across a thin layer of liquid or gas to separate isotopes. Cooling a vertical film on one side and heating it on the other produces convection currents, an upward flow on the hot surface and a downward flow along the cooler side. Under these conditions, lighter \(\ce{^{235}UF6}\) molecules will diffuse toward the warmer surface and heavier \(\ce{^{238}UF6}\) toward the cooler side. The combination of this diffusion and the convection currents causes the lighter U-235 molecules to concentrate on top of the film while the heavier U-238 goes to the bottom (Figure 4). This was a simple, relatively low-cost process, but it consumed much more energy than gaseous diffusion. A plant containing 2,100 columns, each about 15 meters in length, was operated at Oak Ridge to provide the initial enrichment of natural uranium from 0.7% to 0.86% U-235 for the gaseous diffusion and EMIS units. It was closed after about a year of operation. Figure 4: Isotopic Separation by Thermal Diffusion. Courtesy of the U.S. Department of Energy

Production of Enriched Uranium for the First Atomic Bomb

By the spring of 1945, Oak Ridge had shipped approximately 132 lbs. of enriched uranium (90% U-235) to Los Alamos, New Mexico; it had been produced using thermal diffusion, gaseous diffusion, and electromagnetic separation (Figure 5). This enriched uranium was used in "Little Boy", the bomb dropped on Hiroshima on August 6, 1945. With the discontinuation of thermal diffusion and electromagnetic separation after the war, gaseous diffusion became the primary method for enriching uranium in the United States. Today, most nuclear weapons use plutonium as the fissionable component. 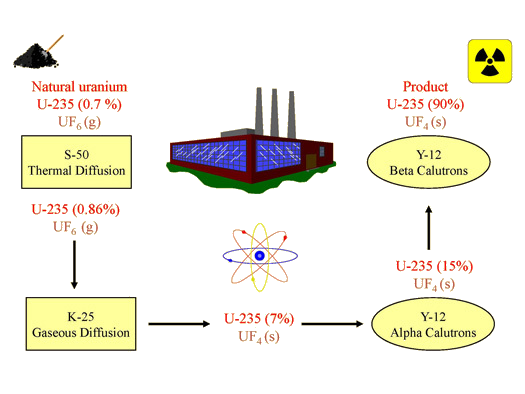 Advancements in technology and materials since the 1960s have allowed centrifugation to become a robust industrial technology. Today, lower energy consumption (5% of that required for gaseous diffusion), shorter separation times, and modular design, make it the preferred method for enriching uranium.

In centrifugation, gaseous \(\ce{UF6}\) is fed into a centrifuge unit consisting of a cylindrical rotor spinning at a high speed inside an evacuated casing (Figure 6). The centrifugal force in the rapidly spinning rotor causes a partial separation of the \(\ce{UF6}\), with the heavier U-238 molecules becoming slightly more concentrated around the outside walls, while the concentration of the lighter U-235 molecules increases around the middle of the tube. The separation is facilitated by a relatively slow axial countercurrent flow in the rotor that moves the molecules enriched in U-235 to one end and the depleted molecules containing increased concentration of U-238 to the other. The separation can be enhanced further by heating the lower end of the casing, creating convection currents that move the U-238 down and the U-235 up. Although it is possible to obtain significantly more enrichment from a single centrifuge than from a single gaseous diffusion stage, this process must be repeated in a series of connected centrifuges known as a cascade (Figure 7) in order to obtain the desired concentration of enriched uranium. The slightly enriched stream is fed to the next higher stage, while the depleted stream is recycled back to the preceding stage. Cascades containing several hundred or even thousands of units are the basic components of a centrifuge enrichment facility. Cascades of individual centrifuges constructed to produce LEU for reactors can be easily reconfigured to produce HEU for weapons. It is also possible to recycle LEU through a cascade for additional enrichment without changing its configuration. Thus, any centrifuge enrichment facility has the potential to produce HEU for weapons, a major concern with respect to nuclear weapons proliferation. Pakistan produced enriched uranium for its nuclear weapons using centrifuge technology acquired by the infamous metallurgist and physicist, A. Q. Khan. Concerns surrounding Iran’s uranium enrichment program center on its cascades of centrifuges at Natanz. The Iranian government claims that it will produce only LEU for nuclear power but there is evidence that Iran is attempting to manufacture HEU for nuclear weapons.