The transuranium element, plutonium, was the first synthetic element to be produced on a large scale. In addition to being fissionable, it has interesting and unusual chemical and metallurgical properties. The story of its discovery and isolation is among the most fascinating in the history of science. Enrico Fermi had attempted to produce transuranium elements - those elements not existing in nature with atomic number greater than 92 - by bombarding uranium with neutrons. Fission was a byproduct of the effort The search for transuranium elements initiated by Fermi continued unabated. In the spring of 1940, Edward McMillan and Philip Abelson, working at the University of California Berkeley (UCB), exposed a natural uranium target to 12 Mev neutrons produced by bombarding Be with cyclotron-accelerated deuterons (2H1).

McMillan and Abelson were able to prove that the chemical and nuclear properties of the product of the U-239 beta decay were unique and thus discovered the first transuranium element, atomic number 93. It was named neptunium (Np) after Neptune, the planet immediately beyond Uranus. However, the first isolation of Np did not occur until October 1944. (The distinction between discovery and isolation is significant. Discovery refers to the first nuclear and chemical proof of the existence of atoms of a new element, while isolation is the procurement of the first weighable amount in pure form. There was often a considerable amount of time between the discovery and isolation of the transuranium elements.) 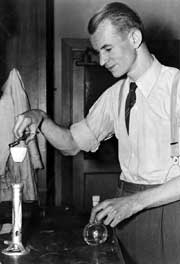 In the summer of 1940, Glen Seaborg, Arthur Wahl, and Joseph Kennedy, a group of chemists at Berkeley, began a search for the next transuranium element, 94, which they thought to be a decay product (daughter) of Np-239.

Continuing the search for element 94 in the winter of 1941, they bombarded uranium oxide with 16 Mev deuterons from the Berkeley cyclotron. They chemically identified another isotope of neptunium, Np-238, which decayed by beta emission to an isotope of element 94 (plutonium) that then emitted alpha particles.

The Pu alpha particle emitter was separated chemically from U, Np, and other reaction products and oxidized with potassium peroxydisulfate, K2S2O8, to a fluoride-soluble oxidation state. The other products of this neutron bombardment did not undergo oxidation with \(K_2S_2O_8\) and thus remained insoluble. The alpha activity (400 counts per minute) used to trace Pu was concentrated in the resulting solution. The Pu in solution was then reduced to a lower oxidation state with SO2 and precipitated as a fluoride using Ce3+ and La3+ as carriers. This chemistry, based on oxidation, reduction, and precipitation reactions, would later prove the basis for the large-scale production of plutonium. The alpha particle energy and activity was unique and thus indicated a new element. At this time, Seaborg and Wahl could not identify which Pu isotope produced the alpha activity. It was later identified as Pu-238. Seaborg remarked, "During this time, a great deal was learned about the chemistry of plutonium. It was established that plutonium in its higher oxidation state was not carried by lanthanum fluoride or cerium fluoride, in contrast to plutonium in the lower state, which was quantitatively coprecipitated with these compounds. The lower state could be oxidized to the higher state with oxidizing agents such as persulfate, dichromate, permanganate, or periodate ions, and then reduced by treatment with sulfur dioxide or bromide ion to the lower oxidation state."

Later in the spring of 1941, another more important isotope of plutonium, Pu-239, was produced using neutrons from the Berkeley cyclotron to target a uranium compound surrounded by paraffin. As Fermi’s group had discovered, the paraffin acted as a moderator to slow the neutrons and thus increase the chances of interaction with the target. This new Pu isotope, an alpha emitter with a half life of about 24,000 years, was separated from other reaction products using the same chemistry as that used to isolate Pu-238. However, the longer half-life of Pu-239 reduced its activity, making it more difficult to detect than Pu-238.

In March 1941, Seaborg’s group irradiated a sample estimated to contain 0.25 mg of Pu-239 surrounded by paraffin with neutrons produced in the cyclotron. Under these conditions, this isotope appeared to undergo fission. When the Pu was replaced with a sample containing approximately 0.5 mg U-235, the other known fissionable material, neutron-induced fission was also observed, but at a rate approximately half that of Pu-239. This discovery raised the possibility of using a controlled chain reaction to produce quantities of Pu-239 sufficient for nuclear weapons. The product Pu-239 would have to be separated from the unreacted uranium and fission products by chemical means. It now became important to investigate the chemistry of plutonium to develop large-scale separation procedures.

Figure \(\PageIndex{4}\): Twenty micrograms of plutonium hydroxide in a capillary tube, September 1942 (Courtesy of the University of California, Berkeley)

However, in the summer of 1942, the cyclotron was the only means of producing plutonium, and the amounts produced were so small that they could not be seen or weighed with existing balances. Calculations showed that long periods of neutron bombardment of uranium in the cyclotron would produce only a few micrograms of Pu-239, much less than that normally required to determine the physical and chemical properties of a new element. The preparation and measurement of such small quantities of plutonium required the development of "ultramicrochemical" techniques and equipment.

The first weighing of a plutonium compound occurred in September of 1942, when 2.77 mg of PuO2 was placed on a balance especially designed for small masses and calibrated with platinum wire. Liquid volumes in the range of 0.10 to 10-5 mL were delivered with an error of less than one percent using calibrated capillary pipettes. Glassware, such as beakers and test tubes, was made from capillary tubing and handled under a microscope with micromanipulators. In November 1943, the first pure plutonium metal was prepared by reducing 35 mg of PuF4 with barium metal at 1,400o C. The plutonium metal appeared as silvery globules weighing about 3 mg each and having an estimated density of 16 g/mL.

Although the Pu-239 isotope had the potential to be fissionable material for bombs or power generation, realization of this potential required larger amounts of this isotope. Large-scale production of Pu-239 required a controlled nuclear chain reaction of uranium, a feat that would soon be achieved by Enrico Fermi and Leo Szilard in Chicago.