Dinitrogen gas (N2) is essential for many organisms to carry out certain roles. However, N2 that is present within organisms is not always the type needed to perform the proper functions.1 To convert N2 into a form that organisms can use, nitrogenase is often utilized. Figure 1 illustrates nitrogenase in the center of the nitrogen synthase complex. In general, nitrogenase is a metalloenzyme used to perform biological nitrogen fixation.2 Bacteria such as Azoto-bacter vinelandi and Clostridium pasteurianum utilize the metalloenzyme.3 In another example, plants need nitrogenase to obtain mineral elements from the soil. Nitrogenase, overall, reduces N2 into NH3 (ammonia).1

There are at least three different types of nitrogenase known including both Vanadium (V) nitrogenase and iron (Fe) nitrogenase2, 5 . These forms of nitrogenase are often found in bacteria.3 The commonly studied and used form of the metalloenzyme is the molybdenum (Mo) nitrogenase.2 It involves a Fe protein and MoFe protein.6 The Fe protein is composed of a [4Fe-4S] cluster and MgATP proteins that help send electrons to the MoFe protein.7 Meanwhile, the MoFe protein consists of a FeMo active site and P-cluster [8Fe-7S] metals that serve as an intermediate for transferring electrons.7 Equation (1) illustrates the complete reaction of the reduction of N2 .

The reduction of N2 into NH3 involves magnesium salt of ATP (MgATP) and a reducing agent such Na2S2O4 (sodium dithionite in vitro) and Fe4S4 (iron-sulfur proteins in vivo).6, 8 MgATP serves in hydrolysis; meanwhile, the reducing agent plays a role in supplying electrons.1 By and large, the Fe protein reduces the MoFe protein.1-2 During reduction, an electron is transferred from the Fe protein to the MoFe protein.1-3 The MoFe protein then undergoes a reaction that involves the hydrolysis of MgATP.2, 9 As a result, energy in the form of MgATP is used to reduce N2.2, 9 A total of eight electrons in the dissociation process are needed to reduce N2.2 In addition to N2, nitrogenase also reduces other molecules such CH3NC and C2H2.6

The active site of nitrogenase is FeMoco. It is the place where dinitrogen and substrates alike are reduced, and it does not contain any amino acids.6 Figure 2 illustrates a crystal structure of the FeMoco active site, which was discovered in 1992.10 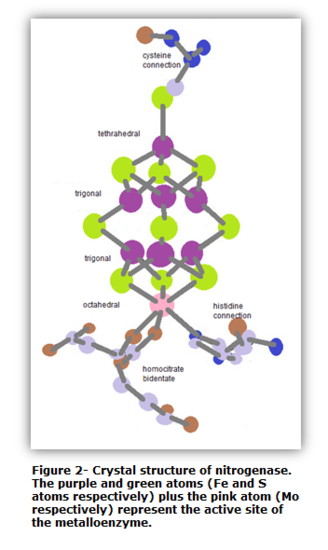 The vital feature of the FeMoco active site is the Fe7MoS9 cluster situated in the center. Located at one end of the cluster is a Mo atom, and at the other end is a Fe atom. The six-coordinate Mo atom is attached to a histidine and bidentate homcitrate chain as well as to three S atoms.10 Collectively, an octahedral structure is formed. Thus, the Mo atom with its attached branches have Oh symmetry. Meanwhile at the other end of the cluster, the Fe atom is attached to a cysteine chain and three S atoms. The Fe atom has a tetrahedral coordination overall. Thus, the Fe atom along with its substituents has Td symmetry. In the center of the cluster are six Fe atoms. Each Fe atom is attached three S atoms. In addition, each Fe atom has a trigonal geometrical structure. The point group of each Fe metal is D2d11. As a whole, the metalloenzyme is large and thus does not have a high symmetry. The overall symmetry is C1.

EPR spectroscopy is the technique often used to study the nitrogenase and its cluster. EPR experiments show that MoFe cofactor posses a 3/2 spin state.12 Information such as this spin state give a valuable spectroscopic fingerprint that can help detect what will happen to nitrogenase under different circumstances, i.e. what happens to the active site when it is purified or isolated.12

It is important to note that the metalloenzyme has a sulfur ligand environment.6 Because of the environment that it is in, many studies have been done on nitrogenase with a sulfur atom as the central atom. Results showed that dinitrogen is able to be reduced. However, the yields of ammonia were relatively low.14

Overall, nitrogenase is a metalloenzyme that plays an important role in the biological processes. Nitrogenase converts dinitrogen gas into ammonia. The active site of the enzyme isFe7MoS9. The cluster has symmetries Td, Oh, and D2d. Overall, the cluster gives the enzyme C1 symmetry. Since the molecule does not have a center of inversion, this suggests that the molecule may both be IR and Raman active. Although it is known that the Fe-Se clusters in the active site aid in the reduction of N2, further research is needed to investigate exactly how the mechanism works.