Methane monoxygenase (MMO) is an enzyme responsible for the oxidation of methane to methanol according to the following equation. When oxidizing, the enzyme oxidize the substrate and adds on O2 to the atom.

MMOs can also oxidide several other hydrocarbons, including aromatic and halogenated as well (Green, et. al., 1985). This enzyme belongs to a class called oxidoreductase, an enzyme that catalyzes an oxidation-reduction reaction. 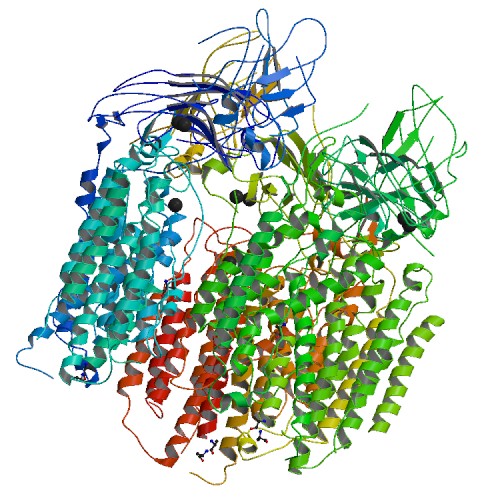 pMMO is the predominant methane oxidation catalyst in the nature; however, due to the difficulty of studying membrane-bound proteins ans the fact that pMMO is highly unstable, the mechanism of the active site of pMMO is poorly known (Takeguchi, et.al, 2000). In contrast, the soluble methane monoxygenase is the best characterized enzyme (Green, et. al.,1985). sMMO is a cytoplasmic enzyme containing a unique diiron sites at its catalytic centre (Green, et. al., 1985). It consists of 3 components: hydrolase, which is a dimer of 3 different subunits (α2, β2, and γ2), component B, and reductase.

Figure 2 : The resting, oxidized, and reduced state of the diiron core.

In the non-linear structure of sMMO, each iron bonds with six octahedral environment. The overall molecule appears to have no symmetry at all and it possesses only one C1 axis of rotation; it, therefore, belongs to the C1 point group (Housecroft, et.al., 2008). Starting with MMOHred (Figure 3) , which has an FeII - FeII core, the diirons centers react with oxygen to form intermediate P, which has an FeIII - FeIII core. Compound P contains a peroxide ring where the oxygens are bound symmetrically. Next, compound P converts to the key reactive compound Q, which has a diamond-core structure. "The reaction with methane goes over the rate determining H-abstraction transition state to reach a bound-radical intermediate MMOHox , which has a bridged hydroxyl ligand interaction weakly with the methyl radical (Mogi et. al., 1999)." Finally, this intermediate rearranges intramolecularly to eliminate the alcohol and regenerate the enzyme, or MMOHred.

Figure 3: The mechanism of sMMO