The substances described in the preceding discussion are composed of molecules that are electrically neutral; that is, the number of positively-charged protons in the nucleus is equal to the number of negatively-charged electrons. In contrast, ions are atoms or assemblies of atoms that have a net electrical charge. Ions that contain fewer electrons than protons have a net positive charge and are called cations. Conversely, ions that contain more electrons than protons have a net negative charge and are called anions. Ionic compounds contain both cations and anions in a ratio that results in no net electrical charge.

Figure \(\PageIndex{1}\): Covalent and Ionic Bonding. (a) In molecular hydrogen (H2), two hydrogen atoms share two electrons to form a covalent bond. (b) The ionic compound NaCl forms when electrons from sodium atoms are transferred to chlorine atoms. The resulting Na+ and Cl− ions form a three-dimensional solid that is held together by attractive electrostatic interactions.

Ionic compounds contain both cations and anions in a ratio that results in zero electrical charge.

As shown in Figure \(\PageIndex{2}\), the strength of the interaction is proportional to the magnitude of the charges and decreases as the distance between the particles increases. These energetic factors are discussed in greater quantitative detail later. 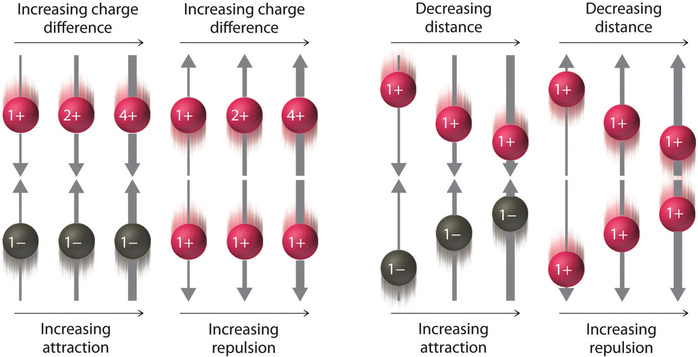 One example of an ionic compound is sodium chloride (NaCl; Figure \(\PageIndex{3}\)), formed from sodium and chlorine. In forming chemical compounds, many elements have a tendency to gain or lose enough electrons to attain the same number of electrons as the noble gas closest to them in the periodic table. When sodium and chlorine come into contact, each sodium atom gives up an electron to become a Na+ ion, with 11 protons in its nucleus but only 10 electrons (like neon), and each chlorine atom gains an electron to become a Cl− ion, with 17 protons in its nucleus and 18 electrons (like argon), as shown in part (b) in Figure \(\PageIndex{1}\). Solid sodium chloride contains equal numbers of cations (Na+) and anions (Cl−), thus maintaining electrical neutrality. Each Na+ ion is surrounded by 6 Cl− ions, and each Cl− ion is surrounded by 6 Na+ ions. Because of the large number of attractive Na+Cl− interactions, the total attractive electrostatic energy in NaCl is great. 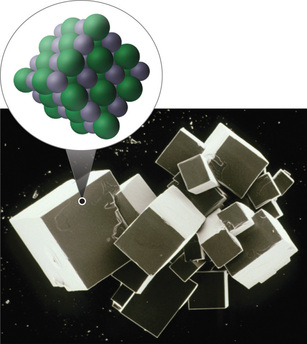 Figure \(\PageIndex{3}\): Sodium Chloride: an Ionic Solid. The planes of an NaCl crystal reflect the regular three-dimensional arrangement of its Na+ (purple) and Cl− (green) ions.

Predict the charge on the most common monatomic ion formed by each element.

Predict the charge on the most common monatomic ion formed by each element.

In general, ionic and covalent compounds have different physical properties. Ionic compounds form hard crystalline solids that melt at high temperatures and are resistant to evaporation. These properties stem from the characteristic internal structure of an ionic solid, illustrated schematically in Figure \(\PageIndex{4a}\) which shows the three-dimensional array of alternating positive and negative ions held together by strong electrostatic attractions. In contrast, as shown in Figure \(\PageIndex{4b}\) most covalent compounds consist of discrete molecules held together by comparatively weak intermolecular forces (the forces between molecules), even though the atoms within each molecule are held together by strong intramolecular covalent bonds (the forces within the molecule). 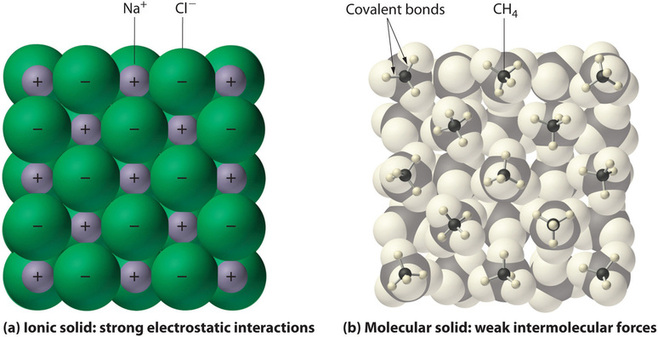 Covalent substances can be gases, liquids, or solids at room temperature and pressure, depending on the strength of the intermolecular interactions. Covalent molecular solids tend to form soft crystals that melt at low temperatures and evaporate easily. Some covalent substances, however, are not molecular but consist of infinite three-dimensional arrays of covalently bonded atoms and include some of the hardest materials known, such as diamond. This topic will be addressed elsewhere. The covalent bonds that hold the atoms together in the molecules are unaffected when covalent substances melt or evaporate, so a liquid or vapor of independent molecules is formed. For example, at room temperature, methane, the major constituent of natural gas, is a gas that is composed of discrete \(\ce{CH4}\) molecules. A comparison of the different physical properties of ionic compounds and covalent molecular substances is given in Table \(\PageIndex{2}\).

The atoms in chemical compounds are held together by attractive electrostatic interactions known as chemical bonds. Ionic compounds contain positively and negatively charged ions in a ratio that results in an overall charge of zero. The ions are held together in a regular spatial arrangement by electrostatic forces. Atoms or groups of atoms that possess a net electrical charge are called ions; they can have either a positive charge (cations) or a negative charge (anions). Ions can consist of one atom (monatomic ions) or several (polyatomic ions). The charges on monatomic ions of most main group elements can be predicted from the location of the element in the periodic table. Ionic compounds usually form hard crystalline solids with high melting points.