E5.5:The molecule contains two groups of equivalent protons: the twelve pointing to the outside of the ring, and the six pointing into the center of the ring. The molecule is aromatic, as evidenced by the chemical shift of the ‘outside’ protons’ (and the fact that there are 18 pelectrons, a Hückel number). The inside protons are shielded by the induced field of the aromatic ring current, because inside the ring this field points in the opposite direction of B0. This is the source of the unusually low (negative relative to TMS) chemical shift for these protons. (recall that splitting is generally not seen with protons on heteroatoms) E5.10:We can think of this signal as being a triplet of triplets, but because the two coupling constants are very close, what we would actually see is a 1,2,3,2,1 pentet. a) 8 signals (each carbon is different)

c) 6 signals (each carbon is different) E5.16: This benzylic carbocation is especially stable, as the positive charge is stabilized by two benzene rings.

P5.1: (structures n and o are chiral, and thus we must consider diastereotopic protons)

P5.2: (valine and leucine both have diastereotopic (and thus nonequivalent) methyl groups. Notice that even if some peaks overlapped, you could still get this number as long as you could integrate one signal on each molecule: you could, for example, do the same calculation (and get the same result) by comparing integrations of Hc and Hd signals, and just scale based on the fact that the Hc signal represents three protons while the Hd signal represents six protons. C5.1: The 13C-NMR signal for the CDCl3 solvent appears as a 1:1:1 triplet due to 1-bond coupling with the deuterium. Protons and 13C nuclei both have a spin quantum number I = ½, which means that they can assume two spin energy levels (+ ½ and – ½ ) when placed in a strong external magnetic field. Deuterium, however, has a spin number I = 1, meaning that it can assume three spin energy level (-1, 0, +1) in the external field. So while a proton splits the signal from a neighboring nucleus into a doublet, a deuterium splits its neighbor’s signal into three sub-peaks of equal height.

C5.3:First, convert the chemical shift data from ppm to Hz, plot the data, then simply compute the distance between the appropriate sub-peaks. For example, the distance between the two subpeaks in the Ha doublet (9.67 ppm) is about 7.8 Hz, which is the value of Jab. To get Jbc, it would make sense to look at the Hc doublet – except that this signal overlaps with the aromatic signals. Alternatively, we can look at the Hb signal, which is centered at 6.69 ppm. This is a doublet of doublets, but as we already know Jab we can measure Jbc (approximately 16 Hz). 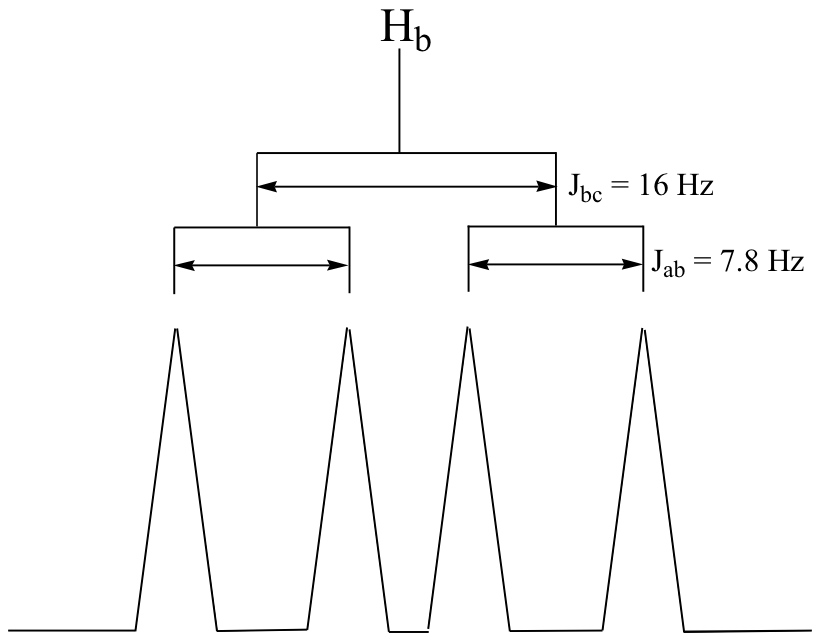