(The prefix ‘hemi’ (half) is used in each term because, as we shall soon see, a second addition of an alcohol nucleophile can occur, resulting in species called acetals and ketals.)

The reactions in the figure above are highly reversible: hemiacetals and hemiketals easily convert back to aldehydes and ketones plus alcohol. The mechanism for the conversion of a hemiacetal back to an aldehyde is shown below: When in aqueous solution, aldehyde and ketones groups can form hydrates: this is simply the result of addition of water to the carbonyl.

In many cases, the hydrate is actually the predominant form in water, although it is customary to show the aldehyde or ketone structure in structural drawings. Like all sugar molecules, both glucose and fructose have multiple hydroxyl groups. Notice, however, that glucose has an aldehyde group and fructose has a ketone group (biochemists generally use the terms ‘aldose’ and ‘ketose’ when referring to sugar molecules). Both molecules are shown above in their open chain form. However, in aqueous solution glucose, fructose, and other sugars of five or six carbons rapidly interconvert between straight-chain and cyclic forms, The cyclic forms are intramolecular hemiacetals and hemiketals. Unlike almost all of the other biochemical reactions you will see in this text, these sugar cyclization reactions are not catalyzed by enzymes: they occur spontaneously and reversibly in solution. For most five- and six-carbon sugars, the cyclic forms predominate in equilibrium.

The cyclic form of glucose is a six-membered ring, with an intramolecular hemiacetal formed by attack of the hydroxl on the fifth carbon on the aldehyde carbon (C1). This carbon is called the anomeric carbon in carbohydrate terminology. Because the formation of glucopyranose occurs spontaneously without enzyme catalysis, shouldn’t equal amounts of these two anomers form? In fact, this does not happen: there is almost twice as much of one diastereomer than the other at equilibrium. Why is this? Remember (section 3.2C) that six-membered rings exist predominantly in the chair conformation, and that the molecule favors the chair conformation in which unfavorable interactions between substituents are minimized – in most cases, this is the conformation in which larger substituents are in the equatorial position. In the lower-energy chair conformation of the major beta anomer of glucopyranose, all of the hydroxyl groups are in the equatorial position, but in the minor alpha anomer one hydroxyl group is forced into the axial position. As a result, the alpha anomer is higher in energy, and less is present at equilibrium.

Fructose in solution forms a six-membered cyclic hemiketal called fructopyranose when the hydroxyl on C6 attacks the C2 ketone carbon. 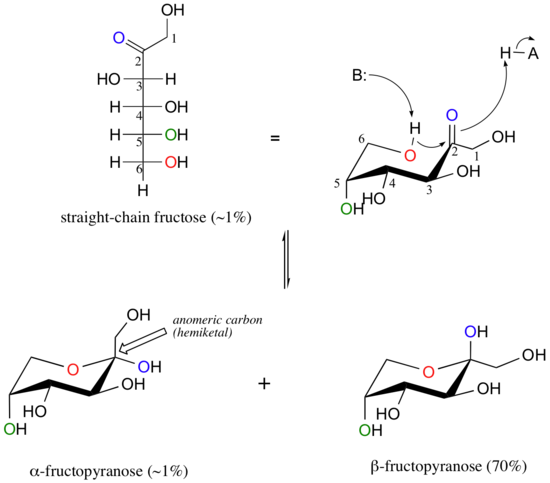 In this case, the beta anomer is heavily favored in equilibrium by a ratio of 70:1. This is because in the minor alpha anomer, the bulky CH2OH group occupies an axial position.

Notice in the above figure that the percentages of alpha and beta anomers present at equilibrium do not add up to 100%. This is because fructose can also exist in solution as a five-membered cyclic hemiketal, referred to in carbohydrate nomenclature as fructofuranose.

In the formation of fructofuranose from open-chain fructose, the hydroxyl group on the fifth carbon attacks the ketone. In aqueous solution, then, fructose exists as an equilibrium mixture of 70% beta-fructopyranose, 23% beta-fructofuranose, and smaller amounts of the open chain and cyclic alpha anomers.

Although we have been looking at specific examples for glucose and fructose, other five- and six-carbon monosaccharides also exist in solution as equilibrium mixtures of open chains and cyclic intramolecular hemiacetals and hemiketals. Shorter monosaccharides are much less likely to undergo analogous ring-forming reactions, however, due to the inherent instability of three and four-membered rings.