The blue color of the sky during the day and the red color of the sun at sunset result from the scattering of light by small particles of dust, molecules of water, and other gases in the atmosphere. The efficiency of a photon’s scattering depends on its wavelength. We see the sky as blue during the day because violet and blue light scatter to a greater extent than other, longer wavelengths of light. For the same reason, the sun appears red at sunset because red light is less efficiently scattered and is more likely to pass through the atmosphere than other wavelengths of light. The scattering of radiation has been studied since the late 1800s, with applications beginning soon thereafter. The earliest quantitative applications of scattering, which date from the early 1900s, used the elastic scattering of light by colloidal suspensions to determine the concentration of colloidal particles.

Elastic scattering is divided into two types: Rayleigh, or small-particle scattering, and large-particle scattering. Rayleigh scattering occurs when the scattering particle’s largest dimension is less than 5% of the radiation’s wavelength. The intensity of the scattered radiation is proportional to its frequency to the fourth power, ν4—accounting for the greater scattering of blue light than red light—and is symmetrically distributed (Figure 10.63a). For larger particles, scattering increases in the forward direction and decreases in the backwards direction as the result of constructive and destructive interferences (Figure 10.63b). 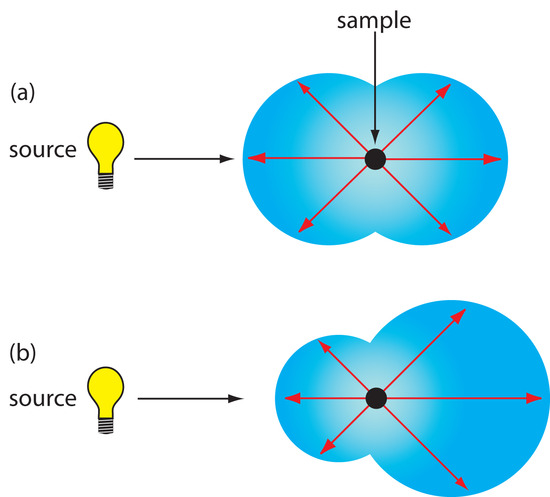 Turbidimetry and nephelometry are two techniques based on the elastic scattering of radiation by a suspension of colloidal particles. In turbidimetry the detector is placed in line with the source and the decrease in the radiation’s transmitted power is measured. In nephelometry scattered radiation is measured at an angle of 90o to the source. The similarity of turbidimetry to absorbance and of nephelometry to fluorescence is evident in the instrumental designs shown in Figure 10.64. In fact, turbidity can be measured using a UV/Vis spectrophotometer and a spectrofluorimeter is suitable for nephelometry. Figure 10.64 Schematic diagrams for (a) a turbimeter, and (b) a nephelometer.

The relationship between transmittance and the concentration of the scattering particles is similar to that given by Beer’s law:

As with Beer’s law, equation 10.32 may show appreciable deviations from linearity. The exact relationship is established by a calibration curve prepared using a series of standards containing known concentrations of analyte.

In nephelometry the relationship between the intensity of scattered radiation, IS, and the concentration of scattering particles is

where kS is an empirical constant for the system and I0 is the source radiation’s intensity. The value of kS is determined from a calibration curve prepared using a series of standards containing known concentrations of analyte.

The choice of wavelength is based primarily on the need to minimize potential interferences. For turbidimetry, where the incident radiation is transmitted through the sample, a monochromator or filter allow us to avoid wavelengths that are absorbed by the sample. For nephelometry, the absorption of incident radiation is not a problem unless it induces fluorescence from the sample. With a nonfluorescent sample there is no need for wavelength selection, and a source of white light may be used as the incident radiation. For both techniques, other considerations in choosing a wavelength including the effect of wavelength on scattering intensity, the transducer’s sensitivity, and the source’s intensity. For example, many common photon transducers are more sensitive to radiation at 400 nm than at 600 nm.

Although equation 10.32 and equation 10.33 relate scattering to the concentration of scattering particles, the intensity of scattered radiation is also influenced by the particle’s size and shape. Samples containing the same number of scattering particles may show significantly different values for -logT or IS, depending on the average diameter of the particles. For a quantitative analysis, therefore, it is necessary to maintain a uniform distribution of particle sizes throughout the sample and between samples and standards.

Most turbidimetric and nephelometric methods rely on precipitation to form the scattering particles. As we learned in Chapter 8, the properties of a precipitate are determined by the conditions under which it forms. To maintain a reproducible distribution of particle sizes between samples and standards, it is necessary to control parameters such as the concentration of reagents, the order of adding reagents, the pH and temperature, the agitation or stirring rate, the ionic strength, and the time between the precipitate’s initial formation and the measurement of transmittance or scattering. In many cases a surface-active agent—such as glycerol, gelatin, or dextrin—is added to stabilize the precipitate in a colloidal state and to prevent the coagulation of the particles.

Turbidimetry and nephelometry are widely used to determine the clarity of water, beverages, and food products. For example, a nephelometric determination of the turbidity of water compares the sample’s scattering to the scattering of a set of standards. The primary standard for measuring turbidity is formazin, which is an easily prepared, stable polymer suspension (Figure 10.65).20 Formazin prepared by mixing a 1 g/100 mL solution of hydrazine sulfate, N2H4•H2SO4, with a 10 g/100 mL solution of hexamethylenetetramine produces a suspension that is defined as 4000 nephelometric turbidity units (NTU). A set of standards with NTUs between 0 and 40 is prepared and used to construct a calibration curve. This method is readily adapted to the analysis of the clarity of orange juice, beer, and maple syrup.

Figure 10.65 Scheme for preparing formazin for use as a turbidity standard.

A number of inorganic cations and anions can be determined by precipitating them under well-defined conditions and measuring the transmittance or scattering of radiation from the precipitated particles. The transmittance or scattering, as given by equation 10.32 or equation 10.33 is proportional to the concentration of the scattering particles, which, in turn, is related by the stoichiometry of the precipitation reaction to the analyte’s concentration. Examples of analytes that have been determined in this way are listed in Table 10.15.

The best way to appreciate the theoretical and practical details discussed in this section is to carefully examine a typical analytical method. Although each method is unique, the following description of the determination of sulfate in water provides an instructive example of a typical procedure. The description here is based on Method 4500–SO42––C in Standard Methods for the Analysis of Water and Wastewater, American Public Health Association: Washington, D. C. 20th Ed., 1998.

Turbidimetric Determination of Sulfate in Water

Adding BaCl2 to an acidified sample precipitates SO42– as BaSO4. The concentration of SO42– may be determined either by turbidimetry or by nephelometry using an incident source of radiation of 420 nm. External standards containing know concentrations of SO42– are used to standardize the method.

Place the sample and the buffer on a magnetic stirrer operated at the same speed for all samples and standards. Add a spoonful of 20–30 mesh BaCl2, using a measuring spoon with a capacity of 0.2–0.3 mL, to precipitate the SO42– as BaSO4. Begin timing when the BaCl2 is added and stir the suspension for 60 ± 2 s. Measure the transmittance or scattering intensity 5.0± 0.5 min after the end of stirring.

How fast and how long we stir the sample after adding BaCl2 influence the size of the precipitate’s particles.

3. Many natural waters have a slight color due to the presence of humic and fulvic acids, and may contain suspended matter (Figure 10.66). Explain why these might interfere with the analysis for sulfate. For each interferent, suggest a method for minimizing its effect on the analysis.

Suspended matter in the sample contributes to the scattering, resulting in a positive determinate error. We can eliminate this interference by filtering the sample prior to its analysis. A sample that is colored may absorb some of the source’s radiation, leading to a positive determinate error. We can compensate for this interference by taking a sample through the analysis without adding BaCl2. Because no precipitate forms, we can use the transmittance of this sample blank to correct for the interference.

After using the calibration curve to determine the amount of sulfate in the sample, subtracting 6.00 mg SO42–/L corrects the result. Figure 10.66 Waterfall on the River Swale in Richmond, England. The river, which flows out of the moors in the Yorkshire Dales, is brown in color as the result of organic matter that leaches from the peat found in the moors.

To evaluate the method described in Representative Method 10.5, a series of external standard was prepared and analyzed, providing the results shown in the following table.

Substituting the sample’s transmittance into the calibration curve’s equation gives the concentration of sulfate in sample as 14.2 mg SO42–/L.