Oxidation-reduction reactions are of central importance in organic chemistry and biochemistry. The burning of fuels that provides the energy to maintain our civilization and the metabolism of foods that furnish the energy that keeps us alive both involve redox reactions. 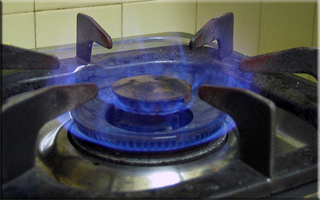 Figure \(\PageIndex{1}\): The Burning of Natural Gas. The burning of natural gas is not only a combustion reaction but also a redox reaction. Similar reactions include the burning of gasoline and coal. These are also redox reactions. Image used with permission from Wikipedia.

In respiration, the biochemical process by which the oxygen we inhale in air oxidizes foodstuffs to carbon dioxide and water, redox reactions provide energy to living cells. A typical respiratory reaction is the oxidation of glucose (\(\ce{C6H12O6}\)), the simple sugar we encountered in the chapter-opening essay that makes up the diet of yeast:

Organic chemists use a variety of redox reactions. For example, potassium dichromate (\(\ce{K2Cr2O7}\)) is a common oxidizing agent that can be used to oxidize alcohols (symbolized by the general formula ROH). The product of the reaction depends on the location of the OH functional group in the alcohol molecule, the relative proportions of alcohol and the dichromate ion, and reaction conditions such as temperature. If the OH group is attached to a terminal carbon atom and the product is distilled off as it forms, the product is an aldehyde, which has a terminal carbonyl group (C=O) and is often written as RCHO. One example is the reaction used by the Breathalyzer to detect ethyl alcohol (\(\ce{C2H5OH}\)) in a person’s breath:

If the product acetaldehyde (\(\ce{CH3CHO}\)) is not removed as it forms, it is further oxidized to acetic acid (\(\ce{CH3COOH}\)). In this case, the overall reaction is as follows:

When the OH group of the alcohol is bonded to an interior carbon atom, the oxidation of an alcohol will produce a ketone (the formulas of ketones are often written as RCOR, and the carbon–oxygen bond is a double bond). The simplest ketone is derived from 2-propanol (\(\ce{CH3CHOHCH3}\)). It is the common solvent acetone [\(\ce{(CH3)2CO}\)], which is used in varnishes, lacquers, rubber cement, and nail polish remover. Acetone can be formed by the following redox reaction:

As we have just seen, aldehydes and ketones can be formed by the oxidation of alcohols. Conversely, aldehydes and ketones can be reduced to alcohols. Reduction of the carbonyl group is important in living organisms. For example, in anaerobic metabolism, in which biochemical processes take place in the absence of oxygen, pyruvic acid (\(\ce{CH3COCOOH}\)) is reduced to lactic acid (\(\ce{CH3CHOHCOOH}\)) in the muscles.

(Pyruvic acid is both a carboxylic acid and a ketone; only the ketone group is reduced.) The buildup of lactic acid during vigorous exercise is responsible in large part for the fatigue that we experience.

In food chemistry, the substances known as antioxidants are reducing agents. Ascorbic acid (vitamin C; \(\ce{C6H8O6}\)) is thought to retard potentially damaging oxidation of living cells. In the process, it is oxidized to dehydroascorbic acid (\(\ce{C6H6O6}\)). In the stomach, ascorbic acid reduces the nitrite ion (\(\ce{NO_2^{−}}\)) to nitric oxide (\(\ce{NO}\)):

If reaction in Equation \(\ref{Eq7}\) did not occur, nitrite ions from foods would oxidize the iron in hemoglobin, destroying its ability to carry oxygen.

Tocopherol (vitamin E) is also an antioxidant. In the body, vitamin E is thought to act by scavenging harmful by-products of metabolism, such as the highly reactive molecular fragments called free radicals. In foods, vitamin E acts to prevent fats from being oxidized and thus becoming rancid. Vitamin C is also a good antioxidant (Figure \(\PageIndex{2}\)). Figure \(\PageIndex{2}\): Citrus Fruits. Citrus fruits, such as oranges, lemons, and limes, are good sources of vitamin C, which is an antioxidant. Wedges of pink grapefruit, lime, and lemon, and a half orange (clockwise from top). Image used with permission from Wikipedia.

Finally, and of greatest importance, green plants carry out the redox reaction that makes possible almost all life on Earth. They do this through a process called photosynthesis, in which carbon dioxide and water are converted to glucose (\(\ce{C6H12O6}\)). The synthesis of glucose requires a variety of proteins called enzymes and a green pigment called chlorophyll that converts sunlight into chemical energy (Figure \(\PageIndex{3}\)). The overall change that occurs is as follows: Figure \(\PageIndex{3}\): Life on Earth. Photosynthesis is the fundamental process by which plants use sunlight to convert carbon dioxide and water into glucose and oxygen. Then plants make more complex carbohydrates. It is the ultimate source of all food on Earth, and it is a redox reaction. Image used with permission (Public Domain; Wikipedia).

Redox reactions are common in organic and biological chemistry, including the combustion of organic chemicals, respiration, and photosynthesis.