Alcohols are amphoteric; they can act as both acid or base. The lone pair of electrons on oxygen atom makes the –OH group weakly basic. Oxygen can donate two electrons to an electron-deficient proton. Thus, in the presence of a strong acid, R—OH acts as a base and protonates into the very acidic alkyloxonium ion +OH2 (The pKa value of a tertiary protonated alcohol can go as low as -3.8). This basic characteristic of alcohol is essential for its dehydration reaction with an acid to form alkenes.

Different types of alcohols may dehydrate through a slightly different mechanism pathway. However, the general idea behind each dehydration reaction is that the –OH group in the alcohol donates two electrons to H+ from the acid reagent, forming an alkyloxonium ion. This ion acts as a very good leaving group which leaves to form a carbocation. The deprotonated acid (the base) then reacts with the hydrogen adjacent to the carbocation and form a double bond.

Primary alcohols dehydrate through the E2 mechanism. The hydroxyl oxygen donates two electrons to a proton from sulfuric acid (H2SO4), forming an alkyloxonium ion. Then the conjugate base, HSO4–, reacts with one of the adjacent (beta) hydrogen atoms while the alkyloxonium ion leaves in a concerted process, forming a double bond.

Secondary and tertiary alcohols dehydrate through the E1 mechanism. Similarly to the reaction above, secondary and tertiary –OH protonate to form alkyloxonium ions. However, in this case the ion leaves first and forms a carbocation as the reaction intermediate. The water molecule (which is a stronger base than the HSO4- ion) then abstracts a proton from an adjacent carbon to form a double bond. Notice in the mechanism below that the alkene formed depends on which proton is abstracted: the red arrows show formation of the more substituted 2-butene, while the blue arrows show formation of the less substituted 1-butene. Recall that according to Zaitsev's Rule, the more substituted alkenes are formed preferentially because they are more stable than less substituted alkenes. Additinally, trans alkenes are more stable than cis alkenes and are also the major product formed. For the example below, the trans diastereomer of the 2-butene product is most abundant. 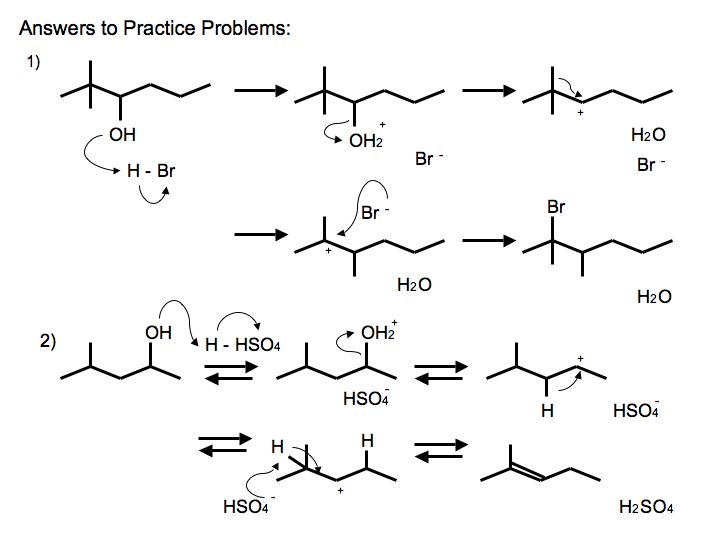 6. Starting with cyclohexanol, describe how you would prepare cyclohexene.

7. In the dehydration of 1-methylcyclohexanol, which product is favored?

In the dehydration of this diol the resulting product is a ketone. Draw the mechanism of its formation. (Hint a rearrangement occurs)

Draw an arrow pushing mechanism for the acid catalyzed dehydration of the following alcohol, make sure to draw both potential mechanisms. Assume no rearrangement for the first two product mechanisms. Which of these two would likely be the major product? If there was a rearrangement, draw the expected major product.

6. H2SO4 with heat since there are no concerns about C+ rearrangement

This reaction is known as the Pinacol rearrangement.

9. Note: While the mechanism is instructive for the first part of the this answer. The carbocation rearrangement would occur and determine the major and minor products as explained in the second part of this answer.

The major product of this mechanism would be the more highly substituted alkene, or the product formed from the red arrows.