Chemists use various strategies to increase the yield of the desired products of reactions. When synthesizing an ester, for example, how can a chemist control the reaction conditions to obtain the maximum amount of the desired product? Only three types of stresses can change the composition of an equilibrium mixture:

In this section, we explore how changes in reaction conditions can affect the equilibrium composition of a system. We will explore each of these possibilities in turn.

If we add a small volume of carbon tetrachloride (\(CCl_4\)) solvent to a flask containing crystals of iodine, we obtain a saturated solution of \(I_2\) in \(CCl_4\), along with undissolved crystals:

The system reaches equilibrium, with \(K = [I_2]\). If we add more \(CCl_4\), thereby diluting the solution, \(Q\) is now less than \(K\). Le Châtelier’s principle tells us that the system will react to relieve the stress—but how? Adding solvent stressed the system by decreasing the concentration of dissolved \(I_2\). Hence more crystals will dissolve, thereby increasing the concentration of dissolved \(I_2\) until the system again reaches equilibrium if enough solid \(I_2\) is available (Figure 15.5.1). By adding solvent, we drove the reaction shown in Equation 15.5.1 to the right as written. 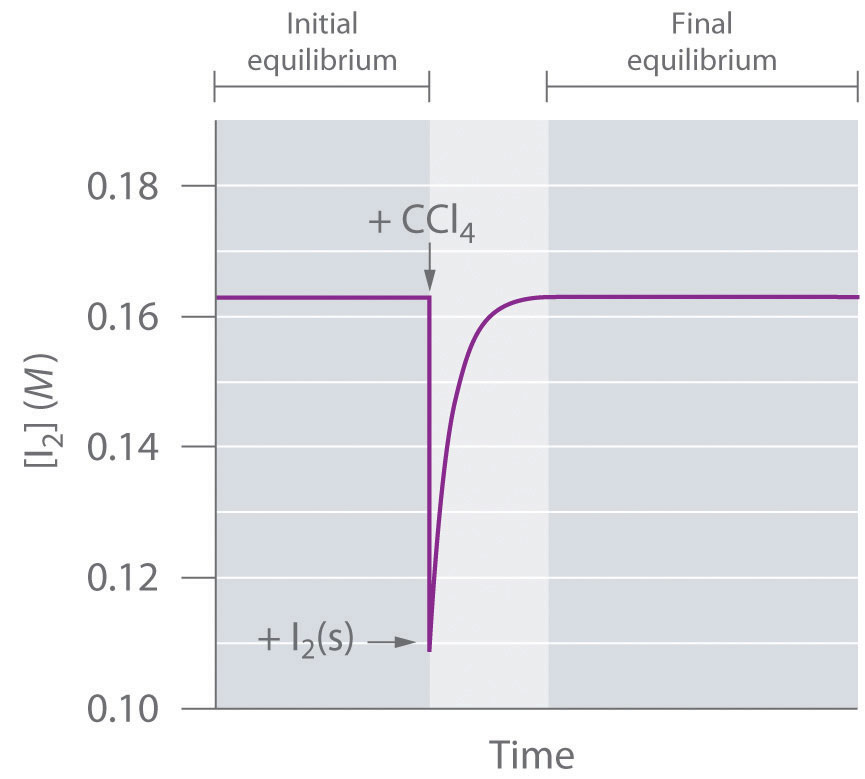 Figure 15.5.1: The Concentration of Dissolved \(I_2\) as a Function of Time Following the Addition of More Solvent to a Saturated Solution in Contact with Excess Solid \(I_2\).The concentration of \(I_2\) decreases initially due to dilution but returns to its original value as long as solid \(I_2\) is present.

We encounter a more complex system in the reaction of hydrogen and nitrogen to form ammonia:

We can confirm that this is indeed what will happen by evaluating \(Q_p\) under the new conditions and comparing its value with \(K_p\). The equations used to evaluate Kp and \(Q_p\) have the same form: substituting the values after adding hydrogen into the expression for \(Q_p\) results in the following: Figure 15.5.2 The Partial Pressures of \(H_2\), \(N_2\), and \(NH_3\) Mixture. Some of the added hydrogen is consumed by reacting with nitrogen to produce more ammonia, allowing the system to reach a new equilibrium composition.

We can force a reaction to go essentially to completion, regardless of the magnitude of \(K\), by continually removing one of the products from the reaction mixture. Consider, for example, the methanation reaction, in which hydrogen reacts with carbon monoxide to form methane and water:

Regardless of the magnitude of K, if either \(H_2O\) or \(CH_4\) can be removed from the reaction mixture so that \([H_2O]\) or \([CH_4]\) is approximately zero, then \(Q \approx 0\). In other words, when product is removed, the system is stressed (\(Q << K\)), and more product will form to counter the stress. Because water (bp = 100°C) is much less volatile than methane, hydrogen, or carbon monoxide (all of which have boiling points below −100°C), passing the gaseous reaction mixture through a cold coil will cause the water vapor to condense to a liquid that can be drawn off. Continuing to remove water from the system forces the reaction to the right as the system attempts to equilibrate, thus enriching the reaction mixture in methane. This technique, referred to as driving a reaction to completion, can be used to force a reaction to completion even if K is relatively small. For example, esters are usually synthesized by removing water via a "condensation reaction" are shown here:

For each equilibrium system, predict the effect of the indicated stress on the specified quantity.

Given: balanced chemical equations and changes

Asked for: effects of indicated stresses

For each equilibrium system, predict the effect that the indicated stress will have on the specified quantity.

Changes in Total Pressure or Volume

Because liquids are relatively incompressible, changing the pressure above a liquid solution has little effect on the concentrations of dissolved substances. Consequently, changes in external pressure have very little effect on equilibrium systems that contain only solids or liquids. In contrast, because gases are highly compressible, their concentrations vary dramatically with pressure. From the ideal gas law, \(PV = nRT\), the concentration (\(C\)) of a gas is related to its pressure as follows:

Hence the concentration of any gaseous reactant or product is directly proportional to the applied pressure (\(P\)) and inversely proportional to the total volume (\(V\)). Consequently, the equilibrium compositions of systems that contain gaseous substances are quite sensitive to changes in pressure, volume, and temperature.

The syringe shown in Figure 15.5.3 initially contains an equilibrium mixture of colorless \(N_2O_4\) and red-brown \(NO_2\). Decreasing the volume by 50% causes the mixture to become darker because all concentrations have doubled. Decreasing the volume also constitutes a stress, however, as we can see by examining the effect of a change in volume on \(Q\). At equilibrium,

If the volume is decreased by half, the concentrations of the substances in the mixture are doubled, so the new reaction quotient is now

Because \(Q\) is now greater than \(K\), the system is no longer at equilibrium. The stress can be relieved if the reaction proceeds to the left, consuming 2 mol of \(NO_2\) for every 1 mol of \(N_2O_4\) produced. This will decrease the concentration of \(NO_2\) and increase the concentration of \(N_2O_4\), causing \(Q\) to decrease until it once again equals \(K\). Thus, as shown in Figure 15.5.3, the intensity of the brown color due to \(NO_2\) decreases with time following the change in volume.

Figure 15.5.3 The Effect of Changing the Volume (and Thus the Pressure) of an Equilibrium Mixture of \(N_2O_4\) and \(NO_2\) at Constant Temperature. (a) The syringe with a total volume of 15 mL contains an equilibrium mixture of \(N_2O_4\) and \(NO_2\); the red-brown color is proportional to the \(NO_2\) concentration. (b) If the volume is rapidly decreased by a factor of 2 to 7.5 mL, the initial effect is to double the concentrations of all species present, including \(NO_2\). Hence the color becomes more intense. (c) With time, the system adjusts its composition in response to the stress as predicted by Le Châtelier’s principle, forming colorless \(N_2O_4\) at the expense of red-brown \(NO_2\), which decreases the intensity of the color of the mixture.

Increasing the pressure of a system (or decreasing the volume) favors the side of the reaction that has fewer gaseous molecules and vice versa.

In general, if a balanced chemical equation contains different numbers of gaseous reactant and product molecules, the equilibrium will be sensitive to changes in volume or pressure. Increasing the pressure on a system (or decreasing the volume) will favor the side of the reaction that has fewer gaseous molecules and vice versa.

For each equilibrium system, write the reaction quotient for the system if the pressure is decreased by a factor of 2 (i.e., if the volume is doubled) at constant temperature and then predict the direction of the reaction.

Asked for: direction of reaction if pressure is halved

Use Le Châtelier’s principle to predict the effect of the stress.

Two moles of gaseous products are formed from 4 mol of gaseous reactants. Decreasing the pressure will cause the reaction to shift to the left because that side contains the larger number of moles of gas. Thus the pressure increases, counteracting the stress. \(K\) for this reaction is \(\frac{[NH_3]^2}{[N_2][H_2]^3}\). When the pressure is decreased by a factor of 2, the concentrations are halved, which means that the new reaction quotient is as follows:

Two moles of gaseous products form from 2 mol of gaseous reactants. Decreasing the pressure will have no effect on the equilibrium composition because both sides of the balanced chemical equation have the same number of moles of gas. Here \(K = [C_2H_4]^2/[C_2H_2][C_2H_6]\). The new reaction quotient is as follows:

For each equilibrium system, write a new reaction quotient for the system if the pressure is increased by a factor of 2 (i.e., if the volume is halved) at constant temperature and then predict the direction in which the reaction will shift. Figure 15.5.4 The Effect of Temperature on the Equilibrium between Gaseous \(N_2O_4\) and \(NO_2\). The value of \(K\) changes with temperature of the same 99.9% pure \(NO_2/N_2O_4\) sealed in an ampoule. From left to right -196° C, 0° C, 23° C, 35° C, 50° C. In the endothermic reaction , the equilibrium position can be shifted by changing the temperature. When heat is added and the temperature increases, the reaction shifts to the right and the flask turns reddish brown due to an increase in \(NO_2\). When heat is removed and the temperature decreases, the reaction shifts to the left and flask turns colorless due to an increase in \(N_2O_4\). This demonstrates Le Chatelier’s Principle because the equilibrium shifts in the direction that consumes energy. Figure used with permission from Wikipedia.

For each equilibrium reaction, predict the effect of decreasing the temperature:

Given: balanced chemical equations and values of \(ΔH_{rxn}\)

Asked for: effects of decreasing temperature

Use Le Châtelier’s principle to predict the effect of decreasing the temperature on each reaction.

The formation of \(NH_3\) is exothermic, so we can view heat as one of the products:

If the temperature of the mixture is decreased, heat (one of the products) is being removed from the system, which causes the equilibrium to shift to the right. Hence the formation of ammonia is favored at lower temperatures.

The decomposition of calcium carbonate is endothermic, so heat can be viewed as one of the reactants:

If the temperature of the mixture is decreased, heat (one of the reactants) is being removed from the system, which causes the equilibrium to shift to the left. Hence the thermal decomposition of calcium carbonate is less favored at lower temperatures.

For each equilibrium system, predict the effect of increasing the temperature on the reaction mixture:

Three types of stresses can alter the composition of an equilibrium system: adding or removing reactants or products, changing the total pressure or volume, and changing the temperature of the system. A reaction with an unfavorable equilibrium constant can be driven to completion by continually removing one of the products of the reaction. Equilibria that contain different numbers of gaseous reactant and product molecules are sensitive to changes in volume or pressure; higher pressures favor the side with fewer gaseous molecules. Removing heat from an exothermic reaction favors the formation of products, whereas removing heat from an endothermic reaction favors the formation of reactants.

Le Châtelier’s principle states that a system will change its composition to counteract stress. For the system CO(g) + Cl2(g) \rightleftharpoons COCl2(g), write the equilibrium constant expression Kp. What changes in the values of Q and K would you anticipate when (a) the volume is doubled, (b) the pressure is increased by a factor of 2, and (c) COCl2 is removed from the system?

Is this an endothermic or an exothermic reaction? Explain your reasoning.

The dissociation of water vapor proceeds according to the following reaction: H2O(g) \rightleftharpoons 12O2(g)+H2(g). At 1300 K, there is 0.0027% dissociation, whereas at 2155 K, the dissociation is 1.18%. Calculate K and Kp. Is this an endothermic reaction or an exothermic reaction? How do the magnitudes of the two Equilibria compare? Would increasing the pressure improve the yield of H2 gas at either temperature? (Hint: assume that the system initially contains 1.00 mol of H2O in a 1.00 L container.)

When 1.33 mol of CO2 and 1.33 mol of H2 are mixed in a 0.750 L container and heated to 395°C, they react according to the following equation: CO2(g)+H2(g) \rightleftharpoons CO(g)+H2O(g). If K = 0.802, what are the equilibrium concentrations of each component of the equilibrium mixture? What happens to K if H2O is removed during the course of the reaction?

What are the partial pressures of the gases at each temperature?

If CO were removed, what would be the effect on \(P_{CO_2}\) at each temperature?

Would you expect K to increase or decrease if the pressure were increased at constant temperature and volume?

None of the changes would affect K; (a) Q doubles; (b) Q is halved; Q decreases.

K would not change; it does not depend on volume.

Removing CO would cause the reaction to shift to the right, causing PCO2 to decrease.