A solution of DNA is colorless, and except for being viscous at high concentrations, is visually indistinguishable from water. Therefore, techniques such as gel electrophoresis have been developed to detect and analyze DNA (Figure \(\PageIndex{11}\)). Figure \(\PageIndex{11}\): Apparatus for agarose gel electrophoresis. A waterproof tank is used to pass current through a slab gel, which is submerged in a buffer in the tank. The current is supplied by an adjustable power supply. A gel (stained blue by a dye sometimes used when loading DNA on the gel) sits in a tray, awaiting further analysis, such as photography under a UV light source. (Flickr-457088634_585df11af5_o-pending)

This analysis starts when a solution of DNA is deposited at one end of a gel slab. This gel is made from polymers such as agarose, which is a polysaccharide isolated from seaweed. The DNA is then forced through the gel by an electrical current, with DNA molecules moving toward the positive electrode (Figure \(\PageIndex{12}\)).

Figure \(\PageIndex{12}\): Agarose gel electrophoresis. DNA is loaded into wells at the top of a gel. A current is passed through the gel, pulling DNA towards the positively charged electrode. The DNA fragments are separated by size, with smaller fragments moving fastest towards the electrode. (Wikipedia-Magnus Manske_PD)

As it migrates, each piece of DNA threads its way through the pores, which form between the polymers in the gel. Because shorter pieces can move through these pores faster than longer pieces, gel electrophoresis separates molecules based on their size (length), with smaller DNA pieces moving faster than long ones. DNA molecules of a similar size migrate to a similar location in each gel, called a band. This feature makes it easy to see DNA after staining the DNA with a fluorescent dye such as ethidium bromide (Figure \(\PageIndex{13}\)). By separating a mixture of DNA molecules of known size (size markers) in adjacent lanes on the same gel, the length of an uncharacterized DNA fragment can be estimated. Gel segments containing the DNA bands can also be cut out of the gel, and the size-selected DNA extracted and used in other types of reactions, such as sequencing and cloning. 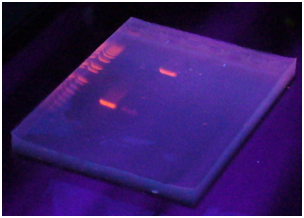 Figure \(\PageIndex{13}\): An agarose gel stained with ethidium bromide and illuminated by UV light. The stain associated with DNA is fluorescent. (Wikipedia-Transcontrol-GFDL)