B. Then, in order to determine the metallic character on each of the elements, you have to look at their location on the periodic table.

D. Double check to make sure they are in the correct order and that you have not skipped any elements.

A. When moving from left to right, metallic character decreases because the elements tend to gain electrons to fill valence shells rather than lose them. Elements on the right side, like chlorine, will gain electrons to fill their valence shells, while elements on the left side, like cesium, will lose electrons in order to have a full valence shell. When moving down the periodic table, metallic character increases because elements can lose electrons more easily as the atomic radius increases. This is because the attraction between the nucleus and valence electrons decreases as there is more distance between them.

B. Pull up a periodic table on a computer, or one that is in your Chemistry book. This is so that you can visually compare where each element is at on the periodic table.

Question: For each figure, state the:

a) total number of electron groups

b) number of bonding pairs 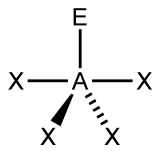 B. Move on to Figure 2, and follow the same procedure as you did for Figure 1.

C. Move on to Figure 3, and follow the same procedure as you did for Figure 1 and Figure 2.

A. As you can see, Figure 1 appears to have 4 electron groups in total. This gives you the information that Figure 1 has a tetrahedral electron geometry. Tetra is the prefix for 4, so you can use that to assist you in coming to an answer. Since X represents a bonding pair, you can determine that Figure 1 has 3 bonding pairs. There is only one E, so it has one lone pair. This makes the AXE notation AX3E. This information allows you to determine the molecular geometry of the figure. An AXE notation of AX3E means that this figure is trigonal pyramidal. The 3 bonding pairs make the triangular base of the pyramid because there are 3 sides to a triangle, and the one lone pair forms the tip, making it a pyramid.

B. Figure 2 appears to have 5 electron groups in total. This means it has a trigonal bipyramidal electron geometry. There are 2 Xs, meaning it has 2 bonding pairs. There are 3 Es, meaning it has 3 lone pairs. This makes the AXE notation out to be AX2E3. This notation leads us to the conclusion that it has a linear molecular geometry. The two bonding pairs make a line, which is the simpler way of determining they form a linear molecular geometry.

C. Figure 3 has 5 electron groups in total, so we can determine it has a trigonal bipyramidal electron geometry, like Figure 2. This figure has 4 Xs, meaning it has 4 bonding pairs. There is only 1 E, so it only has one lone pair. This makes the AXE notation out to be AX4E. There are many different molecular geometries within the category of trigonal bipyramidal, but this one in particular has 4 bonding pairs and 1 lone pair. This means it has a seesaw molecular geometry. One of the bottom two Xs comes towards the front and one goes towards the back. If you picture the figure in 3D without the lone pair, it would look kind of like a seesaw.