The MO picture for a molecule gets complicated when many valence AOs are involved. We can simplify the problem enormously by noting (without proof here) that orbitals of different symmetry with respect to the molecule do not interact. The symmetry operations of a molecule (which can include rotations, mirror planes, inversion centers, etc.), and the symmetry classes of bonds and orbitals in molecules, can be rigorously defined according to group theory. Here we will take a simple approach to this problem based on our intuitive understanding of the symmetry of three-dimensional objects as illustrated in Fig. \(\PageIndex{1}\). AO’s must have the same nodal symmetry (as defined by the molecular symmetry operations), or their overlap is zero.

For example, in the HCl molecule, there is a unique symmetry axis →, which is typically defined as the Cartesian z-axis, as shown in Fig. \(\PageIndex{2}\).

Figure \(\PageIndex{2}\): Orbitals of σ and π symmetry do not interact.

We can see from this figure that the H 1s orbital is unchanged by a 180° rotation about the bond axis. However, the same rotation inverts the sign of the Cl 3pywavefunction. Because these two orbitals have different symmetries, the Cl 3py orbital is nonbonding and doesn’t interact with the H 1s. The same is true of the Cl 3pxorbital. The px and py orbitals have π symmetry (nodal plane containing the bonding axis) and are labeled πnb in the MO energy level diagram, Fig. \(\PageIndex{3}\). In contrast, the H 1s and Cl 3pz orbitals both have σ symmetry, which is also the symmetry of the clay pot shown in Fig. \(\PageIndex{1}\). Because these orbitals have the same symmetry (in the point group of the molecule), they can make the bonding and antibonding combinations shown in Fig. 2.1.1.

The MO diagram of HCl that includes all the valence orbitals of the Cl atom is shown in Fig. \(\PageIndex{3}\). Two of the Cl valence orbitals (3px and 3py) have the wrong symmetry to interact with the H 1s orbital. The Cl 3s orbital has the same (σ) symmetry as H 1s, but it is much lower in energy so there is little orbital interaction. The energy of the Cl 3s orbital is thus affected only slightly by forming the molecule. The pairs of electrons in the πnb and σnb orbitals are therefore non-bonding. 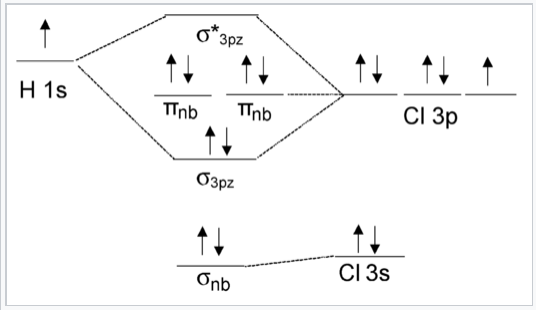 Note that the MO result in Fig. \(\PageIndex{3}\) (1 bond and three pairs of nonbonding electrons) is the same as we would get from valence bond theory for HCl. The nonbonding orbitals are localized on the Cl atom, just as we would surmise from the valence bond picture.