This was discussed earlier in section 9.4.

Primary amines can be synthesized by alkylation of ammonia. A large excess of ammonia is used if the primary amine is the desired product.  Haloalkanes react with amines to give a corresponding alkyl-substituted amine, with the release of a halogen acid. Such reactions, which are most useful for alkyl iodides and bromides, are rarely employed because the degree of alkylation is difficult to control. If the reacting amine is tertiary, a quaternary ammonium cation results. Many quaternary ammonium salts can be prepared by this route with diverse R groups and many halide and pseudohalide anions.

When primary amines are heated with halogenoalkanes, a complicated series of reactions occurs, giving a mixture of products – probably one of the most confusing sets of reactions you will meet at this level. The products of the reactions include secondary and tertiary amines and their salts, and quaternary ammonium salts.

In the presence of excess ethylamine in the mixture, there is the possibility of a reversible reaction. The ethylamine removes a hydrogen from the diethylammonium ion to give free diethylamine – a secondary amine.

But it doesn’t stop here! The diethylamine also reacts with bromoethane – in the same two stages as before. This is where the reaction would start if you reacted a secondary amine with a halogenoalkane.

The ethylamine removes a hydrogen ion from the triethylammonium ion to leave a tertiary amine – triethylamine.

The final stage! The triethylamine reacts with bromoethane to give tetraethylammonium bromide – a quaternary ammonium salt (one in which all four hydrogens have been replaced by alkyl groups).

This time there isn’t any hydrogen left on the nitrogen to be removed. The reaction stops here.

Although direct alkylation of ammonia (large excess) by alkyl halides leads to 1º-amines, alternative procedures are preferred in many cases. These methods require two steps, but they provide pure product, usually in good yield. The general strategy is to first form a carbon-nitrogen bond by reacting a nitrogen nucleophile with a carbon electrophile. The following table lists several general examples of this strategy in the rough order of decreasing nucleophilicity of the nitrogen reagent. In the second step, extraneous nitrogen substituents that may have facilitated this bonding are removed to give the amine product.

Several  methods for reducing nitro groups to amines are known, and some of these were discussed at the end of section 14.2. These include catalytic hydrogenation (H2 + Pd/C), zinc or tin in dilute HCl, and sodium sulfide in ammonium hydroxide solution. Aldehydes and ketones can be converted into 1o, 2o and 3o amines using reductive amination.  The reaction takes place in two parts.  The first step is the nucleophiic addition of the carbonyl group to form an imine.  The second step is the reduction of the imine to an amine using an reducing agent. A reducing agent commonly used for this reaction is sodium cyanoborohydride (NaBH3CN). 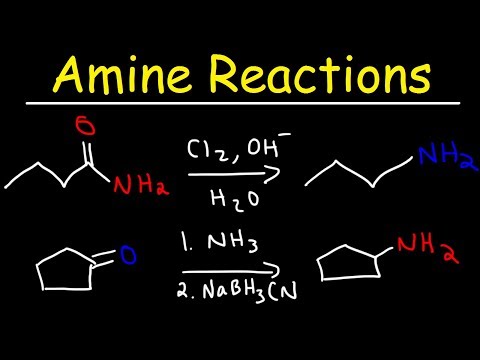 A YouTube element has been excluded from this version of the text. You can view it online here: http://pb.libretexts.org/ochem2walker/?p=174