One of the largest and most diverse classes of reactions is composed of nucleophilic additions to a carbonyl group. Conjugation of a double bond to a carbonyl group transmits the electrophilic character of the carbonyl carbon to the beta-carbon of the double bond. These conjugated carbonyl are called enones or α, β unsaturated carbonyls. A resonance description of this transmission is shown below.

From this formula it should be clear that nucleophiles may attack either at the carbonyl carbon, as for any aldehyde, ketone or carboxylic acid derivative, or at the beta-carbon. These two modes of reaction are referred to as 1,2-addition and 1,4-addition respectively. A 1,4-addition is also called a conjugate addition.

1) Nucleophilic attack on the carbon β to the carbonyl 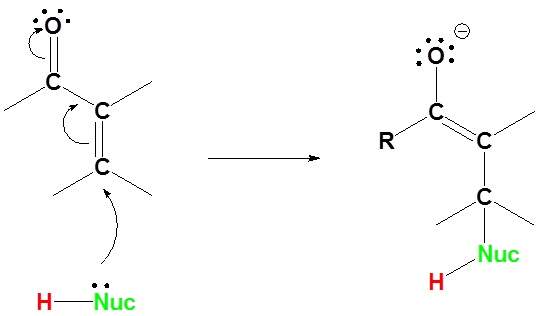 Whether 1,2 or 1,4-addition occurs depends on multiple variables but mostly it is determined by the nature of the nucleophile. During the addition of a nucleophile there is a competition between 1,2 and 1,4 addition products. If the nucleophile is a strong nucleophile, such as a Grignard reagent, both the 1,2 and 1,4 reactions are irreversible and therefore are under kinetic control. Since 1,2-additions to the carbonyl group are fast, we would expect to find a predominance of 1,2-products from these reactions.

If the nucleophile is a weak base, such as alcohols or amines, then the 1,2 addition is usually reversible. This means the competition between 1,2 and 1,4 addition is under thermodynamic control. In this case 1,4-addition dominates because the stable carbonyl group is retained.

Gilman Reagents: These act as a source of R:–

Indicate whether the following nucleophiles are more likely to undergo 1,2-addition or 1,4-addition.