Many of the reactions seen in this chapter involve carbon-carbon bond forming reactions, which often represent the key steps in multistep syntheses.  This is because this chapter showed the use of strongly nucleophilic carbon (Organometallics, Wittig reagents or enolates) reacting with the electrophilic carbon of the C=O.
The chart below shows how to design a synthesis for the most suitable carbon-carbon bond formation. It uses a five-carbon target as a standard model; you should adapt it to your specific carbon skeleton.  The product is shown on the left, and the squiggly arrow shows the “disconnection,” equivalent to the bond that will be made in the synthesis (shown as a dashed line).  The => arrow means “is made from.” 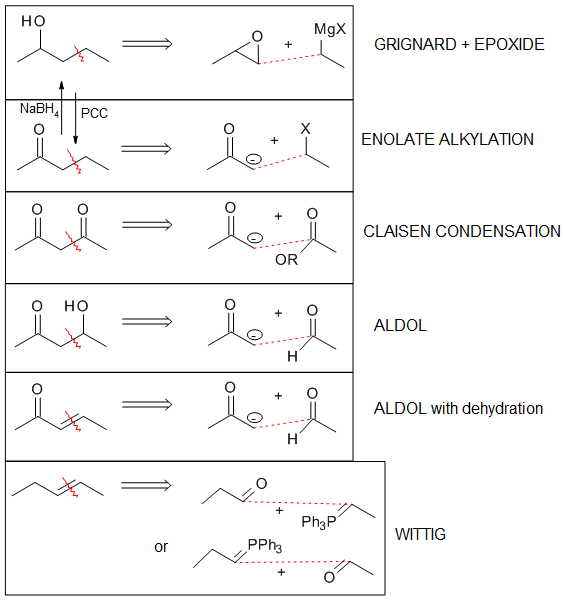 Organometallics and Wittig reactions in synthesis Many of these alcohols can be converted to an alkene, by heating with an acid such as H2SO4 or H3PO4., via an E1 elimination (see section 9.9.).  However, this can often give mixtures of isomeric alkene products with the double bond at different positions.  Therefore, when the target product of a C-C bond forming reaction is an alkene, it is usually better to use a Wittig reaction instead, because this will form the new double bond unambiguously at one position.

Using the aldol reaction in synthesis

After completing this section, you should be able to identify the aldehyde or ketone and other necessary reagents that should be used to prepare a given enone by an aldol condensation.

Aldol reactions are excellent methods for the synthesis of many enones or beta hydroxy carbonyls.  Because of this, being able to predict when an aldol reaction might be used in a synthesis in an important skill.  This accomplished by mentally breaking apart the target molecule and then considering what the starting materials might be.

Fragments which are easily made by an aldol reaction

Alpha,beta-unsaturated carbonyl compounds, such as the enone shown above, are useful for performing conjugate addition reactions, as was covered in section 20.7.