In questions involving drawing resonance contributors, assume that all second-row atoms should have a complete octet in all structures with the exception of positively-charged carbons.

Example answer for bond a: "this is a sigma bond formed by the overlap of an sp3 orbital on one carbon and an sp2 orbital on another carbon."

a) Draw curved arrows showing how each of the resonance contributors on the left could be converted to the one on the right.

b) Label contributors as major, minor, or approximately equivalent to each other. P2.3: Draw a 3D-accurate picture showing the orbitals involved in bonding in the molecules below. Draw all bonds, both sigma and pi, as overlapping orbitals. Indicate whether each orbital is s, p, sp, sp2, or sp3, and indicate (with words or a color scheme) orbitals that are pointed into or out of the plane of the page. Locate all lone pairs in their appropriate orbitals. It is highly recommended to check your drawing with your instructor or tutor.

An example is provided for ethene, CH2CH2:

P2.4: Neither of the pairs of structures below are pairs of resonance contributors.

a) Explain why not.

b) What in fact is the relationship between them?

a-i) Describe the orbitals involved in the bonds indicated by the arrows, as in problem 2.1. P2.6: The four compounds below appeared in the October 9 and October 25, 2006 issues of Chemical and Engineering News.

a-k) For each bond indicated by an arrow, specify the types of orbitals that are overlapping (for example, overlap between two sp3-hybridized carbons would be denoted Csp3-Csp3)

m) Give the molecular formula for the walking-stick compound 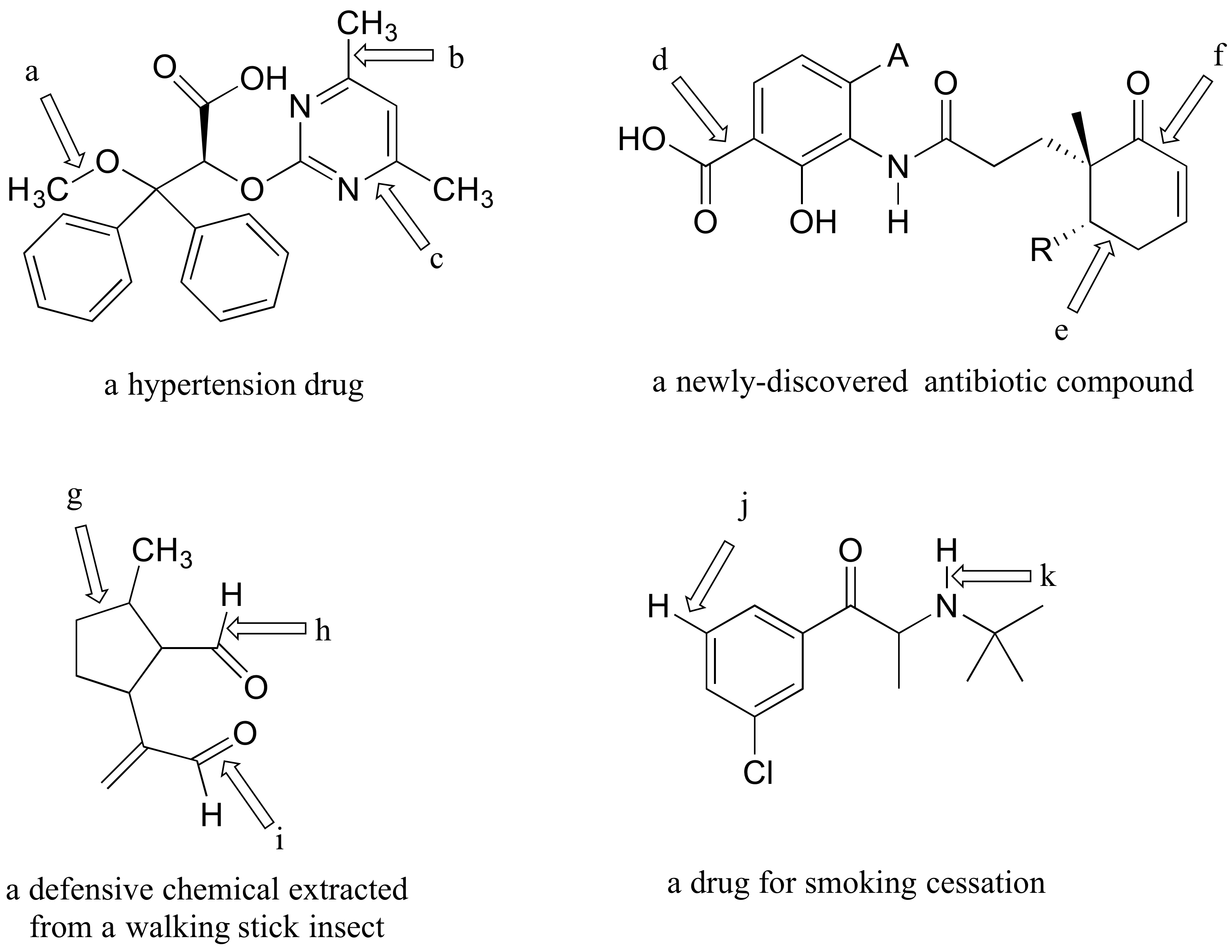 P2.7: Rank the bonds a-f below according to increasing bond length.

P2.8: Redraw the structure below, showing the 2pz orbitals that make up the conjugated pi bond system.

P2.9: Draw two different (minor) resonance contributors of the structure below (the flavin group of flavin adenine dinucleotide (FAD), a biochemical oxidation/reduction molecule) in which the oxygen indicated by an arrow bears a negative formal charge and one of the circled atoms bears a positive formal charge. Include curved arrows to account for the changing positions of electrons and pi bonds. 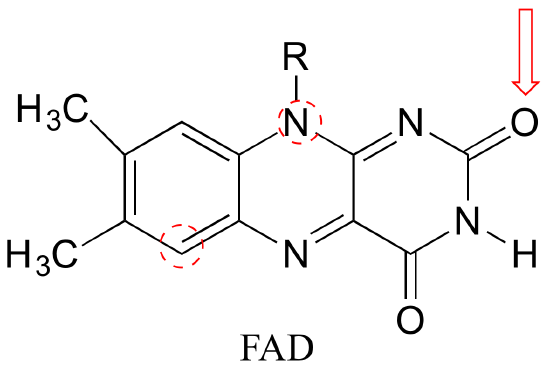 P2.10: The structure below shows an intermediate species in a reaction involving the amino acid alanine, attached to pyridoxal phosphate (vitamin B6). Draw a resonance contributor in which the only formal charges are on the oxygens. P2.11: Below is the structure of the cholesterol-lowering drug Lovastatin. Predict the trend in bond length for P2.12: In problem P1.10, you were asked to draw four different amides with molecular formula C3H7NO. One of these constitutional isomers is significantly less soluble in water than the other three. Which one, and why?

P2.13: Below is the structure of Rimonabant, a drug candidate which is being tested as a possible treatment for alcohol/tobacco dependence and obesity (see Chemical and Engineering News, October 15, 2006, p. 24). Draw minor resonance contributors in which

a) there is a separation of charge between the nitrogen indicated by the arrow and the oxygen.

b) there is a separation of charge between a chlorine (positive) and one of the three nitrogens. 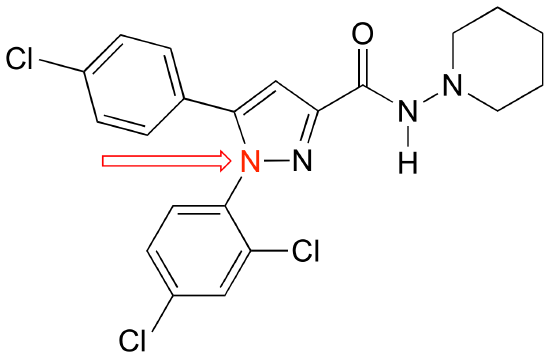 P2.15: Genipin was recently identified as the active compound in gardenia fruit extract, a traditional Chinese medicine for the treatment of diabetes (Chemical and Engineering News June 12, 2006, p. 34; Cell Metab. 2006, 3, 417). Resonance contributors can be drawn in which the oxygen atom indicated by an arrow bears a positive formal charge. Indicate where the corresponding negative formal charge would be located in the most important of these contributors. P2.17: The February 27, 2006 issue of Chemical and Engineering News contains an interesting article on the 100th birthday of Albert Hofmann, the inventor of the hallucinogen LSD. The structure of LSD is shown below. Several minor resonance contributors can be drawn in which the nitrogen atom indicated by an arrow bears a positive formal charge. Indicate atoms where a corresponding negative formal charge could be located in these contributors. P2.18: The human brain contains naturally occurring cannabinoid compounds which are related in structure to D9-tetrahydrocannabinol, the active compound in cannabis. Cannabinoids are thought to exert an antidepressant effect. Researchers at the University of California, Irvine are studying synthetic compounds, such as the one shown below, which inhibit the degradation of natural cannabinoids in the brain. This compound has been shown to have antidepressant-like effects in rats and mice. (Chemical and Engineering News, December 19, 2005, p. 47; Proc. Natl. Acad. Sci. USA 2005, 102, 18620.) b) Answer the same question again, this time with the structural isomer shown below. P2.19: Give the expected trend (lowest to highest) in boiling points for the following series of compounds. P2.20: For each pair of molecules below, choose the one that is more water-soluble, and explain your choice. P2.21: Intermolecular forces: For a-c below, you may want to review amino acid/protein structure basics and the amino acid table. Use abbreviations as appropriate to focus the viewer's attention on the interaction in question.

a) Which of the 20 natural amino acids have side chains capable of forming hydrogen bonds with water?

b) Draw a picture of a hydrogen bond in a protein between an alanine main chain nitrogen and a glutamate side chain.

d) Draw a picture of an charge-charge (ionic) interaction in a protein between an aspartate and a lysine.

P2.22: In properly folded protein structures, main chain nitrogens often participate in hydrogen bonding interactions in the role of donor, but rarely as acceptor. Speculate as to why this might be so, using what you have learned in this chapter.

P2.23: Ozone, O3, is an uncharged, non-cyclic molecule. Draw a Lewis structure for ozone. Are the two oxygen-oxygen bonds the likely to be the same length? What is the bond order? Explain.

P2.24: Imagine that you hear a description of the bonding in water as being derived directly from the atomic orbital theory, without use of the hybrid orbital concept. In other words, the two bonds would be formed by the overlap of the half-filled 2py and 2pz orbitals of oxygen with the 1s orbitals of hydrogen, while the two lone pairs on oxygen would occupy the 2s and 2px orbitals. What is wrong with this picture? How would the bonding geometry differ from what is actually observed for water?

a) Draw a picture showing the geometry of the overlapping orbitals that form the bonding network in allene, H2CCCH2. Then, draw a Lewis structure for the molecule, using the solid/dash wedge bond convention as necessary to indicate the correct geometry of the s bonds.

b) Draw a picture showing the geometry of the overlapping orbitals that form the bonding network in carbon dioxide.

P2.26 Below is the structure of ropinerol, a drug made by GlaxoSmithKline for the treatment of Parkinson's disease. Is the five-membered ring part of the aromatic system? Explain your answer. P2.27: Classify each of the molecules/ions below as aromatic or not aromatic. Explain your reasoning.

P2.28: For each of the compounds below, several minor resonance contributors can be drawn in which the atom indicated by an arrow bears a positive formal charge. Circle all atoms which could bear the corresponding negative formal charge.

P2.29: For each of the compounds below, several minor resonance contributors can be drawn in which the atom indicated by an arrow bears a negative formal charge. Circle all atoms which could bear the corresponding positive formal charge.

P2.30: In each of the cation structures below, circle all carbon atoms to which the positive formal charge can be delocalized by resonance.