The electron affinity [EA] is the energy change for the process of adding an electron to a gaseous atom to form an anion (negative ion).

This process can be either endothermic or exothermic, depending on the element. The EA of some of the elements is given in Figure \(\PageIndex{6}\). You can see that many of these elements have negative values of EA, which means that energy is released when the gaseous atom accepts an electron. However, for some elements, energy is required for the atom to become negatively charged and the value of their EA is positive. Just as with ionization energy, subsequent EA values are associated with forming ions with more charge. The second EA is the energy associated with adding an electron to an anion to form a –2 ion, and so on.

Figure \(\PageIndex{1}\): This version of the periodic table displays the electron affinity values (in kJ/mol) for selected elements.:

As we might predict, it becomes easier to add an electron across a series of atoms as the effective nuclear charge of the atoms increases. We find, as we go from left to right across a period, EAs tend to become more negative. The exceptions found among the elements of group 2 (2A), group 15 (5A), and group 18 (8A) can be understood based on the electronic structure of these groups. The noble gases, group 18 (8A), have a completely filled shell and the incoming electron must be added to a higher n level, which is more difficult to do. Group 2 (2A) has a filled ns subshell, and so the next electron added goes into the higher energy np, so, again, the observed EA value is not as the trend would predict. Finally, group 15 (5A) has a half-filled np subshell and the next electron must be paired with an existing np electron. In all of these cases, the initial relative stability of the electron configuration disrupts the trend in EA.

We also might expect the atom at the top of each group to have the largest EA; their first ionization potentials suggest that these atoms have the largest effective nuclear charges. However, as we move down a group, we see that the second element in the group most often has the greatest EA. The reduction of the EA of the first member can be attributed to the small size of the n = 2 shell and the resulting large electron–electron repulsions. For example, chlorine, with an EA value of –348 kJ/mol, has the highest value of any element in the periodic table. The EA of fluorine is –322 kJ/mol. When we add an electron to a fluorine atom to form a fluoride anion (F–), we add an electron to the n = 2 shell. The electron is attracted to the nucleus, but there is also significant repulsion from the other electrons already present in this small valence shell. The chlorine atom has the same electron configuration in the valence shell, but because the entering electron is going into the n = 3 shell, it occupies a considerably larger region of space and the electron–electron repulsions are reduced. The entering electron does not experience as much repulsion and the chlorine atom accepts an additional electron more readily.

The properties discussed in this unit (size of atoms and ions, effective nuclear charge, ionization energies, and electron affinities) are central to understanding chemical reactivity. For example, because fluorine has an energetically favorable EA and a large energy barrier to ionization (IE), it is much easier to form fluorine anions than cations.

Trends in Metallic and Nonmetallic Character

In this course thusfar (and in the previous course), we have seen that metals are on the left side of the periodic table while nonmetals are generally on the right (exception: Hydrogen). We can classify the metallic character of all the elements with trends similar to those we've previous examined in this unit. Metallic character has the opposite trend of ionization energy and electronegativity, but is similar to the trend we saw for atomic radius: it INCREASES as you move from right to left across rows of the periodic table and INCREASES as you move down columns. This trend does not necessarily apply to transition metals. Figure \(\PageIndex{2}\) shows this trend as well as the others we've discussed in Unit 3. 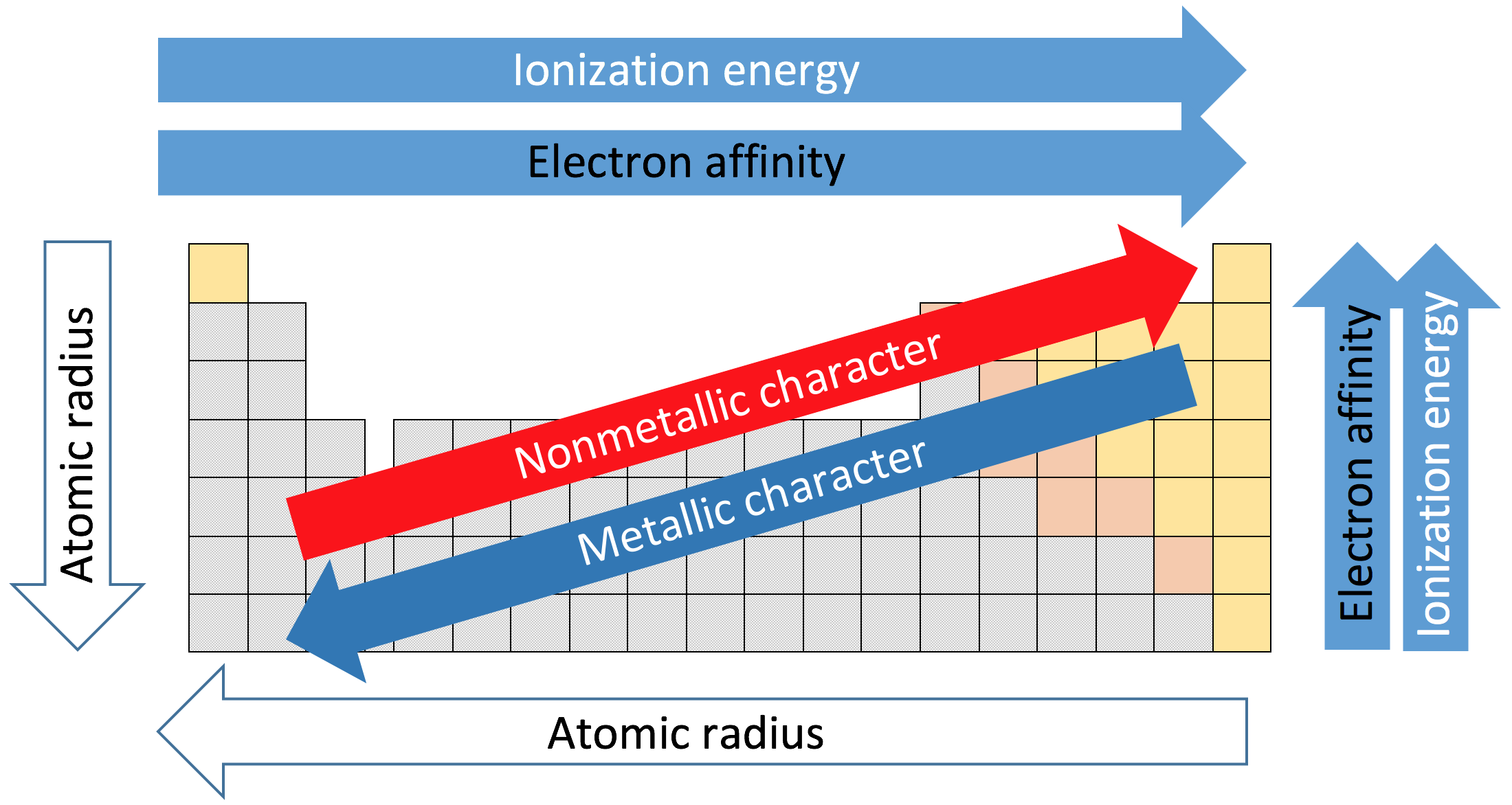 Figure \(\PageIndex{2}\): Metallic character increases as you go from right to left on periods and move down groups on the periodic table. The gray squares represent metals, the orange squares are "metalloids" and the yellow squares are nonmetals.
Credit: "Various Periodic Trends" by Sandbh is licensed under CC BY-SA 4.0

Metallic properties including conductivity and malleability (the ability to be formed into sheets) depend on having electrons that can be removed easily. Thus, metallic character increases as we move down a group and decreases across a period in the same trend observed for atomic size because it is easier to remove an electron that is farther away from the nucleus.

Electron affinity (the energy associated with forming an anion) is more favorable (exothermic) when electrons are placed into lower energy orbitals, closer to the nucleus. Therefore, electron affinity becomes increasingly negative as we move left to right across the periodic table and decreases as we move down a group. For both IE and electron affinity data, there are exceptions to the trends when dealing with completely filled or half-filled subshells. Metallic character increases from right to left across periods on the periodic table and down columns.