It is the strength of the nucleophile that determines the dominant reaction pathway. Strong nucleophiles like Grignard reagents and hydrides will react directly at the carbonyl carbon following the reactivity previously studied. The strong nucleophile reacts with the carbonyl carbon to produce a tetrahedral intermediate that is protonated to form an alcohol. The 1,2 direct addition reaction of prop-2-enal with a Grignard reagent is shown as an example below.

1) Nucleophilic reaction at the carbon β to the carbonyl

Enolates are weak nucleophiles and undergo 1,4 addition to α, β-unsaturated carbonyl compounds in a process called a Michael addition. The reaction is named after American chemist Arthur Michael (1853-1942). Two examples are shown below.

In combination with alkylations and condensations, the Michael reaction may be used to construct a wide variety of complex molecules from relatively simple starting materials. The nucleophile is called the Michael Donor and the electrophile (the alpha,beta-unsaturated carbonyl) is called the Michael Acceptor. The table below shows common reagents used for Michael addition reactions. There are several examples shown below including cyanide as another potential Michael donor. These anions are sufficiently stable that their addition reactions may be presumed reversible. If this is so, the thermodynamic argument used for hetero-nucleophile additions would apply here as well, and would indicate preferential formation of 1,4-addition products. Cyanide addition does not always follow this rule, and aldehydes often give 1,2-products (cyanohydrins). In each case the initial reaction is a Michael addition, and the new carbon-carbon bond is colored magenta. Any subsequent bonds that are formed by other reactions are colored orange.

14. Draw the bond-line structures for the products of the reactions below.

15. Specify the reagents needed to perform the following chemical transformation. 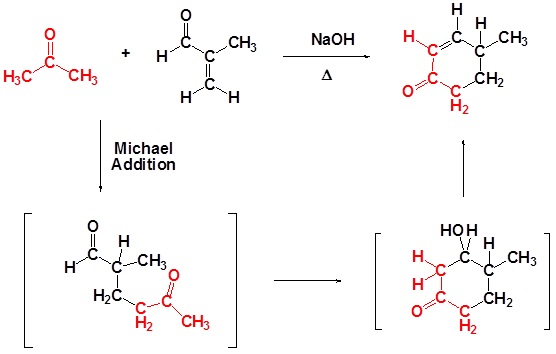 16. Draw the product of the reaction with the enamine prepared from cyclopentanone and pyrrolidine, and the following molecules.

17. Draw the product of the following reaction.