Alcohol classification is an application of the neutral bonding patterns for organic compounds. Oxygen can only form two bonds. The alcohol functional group requires that one of these bonds form with hydrogen to create the hydroxyl group and the other bond needs to be with carbon to create an alcohol. All of the oxygen atoms of all the alcohols look the same, so a different distinction is needed. To classify alcohols, we look at the carbon atom bonded to the hydroxyl group. 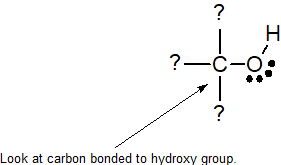 2. Classify the following alcohols as primary, secondary, or tertiary.