When we speak of a pure substance, we are speaking of something that contains only one kind of matter. This can either be one single element or one single compound, but every sample of this substance that you examine must contain exactly the same thing with a fixed, definite set of properties.

*Note: pure oxygen gas consists of molecules but it is still considered an element, rather than a compound, as the molecules are made up of a single type of element. Compounds are made up of one or more element.

If we take two or more pure substances and mix them together, we refer to this as a mixture. Mixtures can always be separated again into component pure substances, because bonding among the atoms of the constituent substances does not occur in a mixture. Whereas a compound may have very different properties from the elements that compose it, in mixtures the substances keep their individual properties. For example sodium is a soft shiny metal and chlorine is a pungent green gas. These two elements can combine to form the compound, sodium chloride (table salt) which is a white, crystalline solid having none of the properties of either sodium or chlorine. If, however, you mixed table salt with ground pepper, you would still be able to see the individual grains of each of them and, if you were patient, you could take tweezers and carefully separate them back into pure salt and pure pepper. 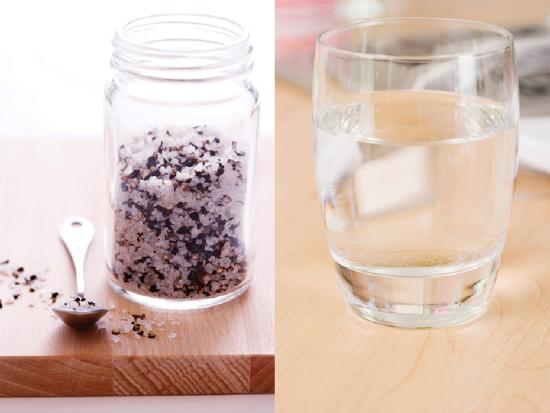 Figure \(\PageIndex{3}\): Types of Mixtures © Thinkstock On the left, the combination of two substances is a heterogeneous mixture because the particles of the two components look different. On the right, the salt crystals have dissolved in the water so finely that you cannot tell that salt is present. The homogeneous mixture appears like a single substance.

Identify the following combinations as heterogeneous mixtures or homogenous mixtures.

Ordinary table salt is called sodium chloride. It is considered a substance because it has a uniform and definite composition. All samples of sodium chloride are chemically identical. Water is also a pure substance. Salt easily dissolves in water, but salt water cannot be classified as a substance because its composition can vary. You may dissolve a small amount of salt or a large amount into a given amount of water. A mixture is a physical blend of two or more components, each of which retains its own identity and properties in the mixture. Only the form of the salt is changed when it is dissolved into water. It retains its composition and properties.

A phase is any part of a sample that has a uniform composition and properties. By definition, a pure substance or a homogeneous mixture consists of a single phase. A heterogeneous mixture consists of two or more phases. When oil and water are combined, they do not mix evenly, but instead form two separate layers. Each of the layers is called a phase.