The lattice energy of nearly any ionic solid can be calculated rather accurately using a modified form of Equation 4.1:

U, which is always a positive number, represents the amount of energy required to dissociate 1 mol of an ionic solid into the gaseous ions. As before, Q1 and Q2 are the charges on the ions and r0 is the internuclear distance. We see from Equation 4.4 that lattice energy is directly related to the product of the ion charges and inversely related to the internuclear distance. The value of the constant k′ depends on the specific arrangement of ions in the solid lattice and their valence electron configurations, topics that will be discussed in more detail in the second semester. Representative values for calculated lattice energies, which range from about 600 to 10,000 kJ/mol, are listed in Table 4.2.1. Energies of this magnitude can be decisive in determining the chemistry of the elements. Figure 4.2.2 A Plot of Lattice Energy versus the Identity of the Halide for the Lithium, Sodium, and Potassium Halides. Because the ionic radii of the cations decrease in the order K+ > Na+ > Li+ for a given halide ion, the lattice energy decreases smoothly from Li+ to K+. Conversely, for a given alkali metal ion, the fluoride salt always has the highest lattice energy and the iodide salt the lowest.

The compound GaP, which is used in semiconductor electronics, contains Ga3+ and P3− ions; the compound BaS contains Ba2+ and S2− ions; the compound CaO contains Ca2+ and O2− ions; and the compound RbCl has Rb+ and Cl− ions. We know from Equation 4.4 that lattice energy is directly proportional to the product of the ionic charges. Consequently, we expect RbCl, with a (−1)(+1) term in the numerator, to have the lowest lattice energy, and GaP, with a (+3)(−3) term, the highest. To decide whether BaS or CaO has the greater lattice energy, we need to consider the relative sizes of the ions because both compounds contain a +2 metal ion and a −2 chalcogenide ion. Because Ba2+ lies below Ca2+ in the periodic table, Ba2+ is larger than Ca2+. Similarly, S2− is larger than O2−. Because the cation and the anion in BaS are both larger than the corresponding ions in CaO, the internuclear distance is greater in BaS and its lattice energy will be lower than that of CaO. The order of increasing lattice energy is RbCl < BaS < CaO < GaP.

The magnitude of the forces that hold an ionic substance together has a dramatic effect on many of its properties. The melting point is the temperature at which the individual ions in a lattice or the individual molecules in a covalent compound have enough kinetic energy to overcome the attractive forces that hold them together in the solid. At the melting point, the ions can move freely, and the substance becomes a liquid. Thus melting points vary with lattice energies for ionic substances that have similar structures. The melting points of the sodium halides (Figure 4.2.3), for example, decrease smoothly from NaF to NaI, following the same trend as seen for their lattice energies (Figure 4.2.2). Similarly, the melting point of MgO is 2825°C, compared with 996°C for NaF, reflecting the higher lattice energies associated with higher charges on the ions. In fact, because of its high melting point, MgO is used as an electrical insulator in heating elements for electric stoves. 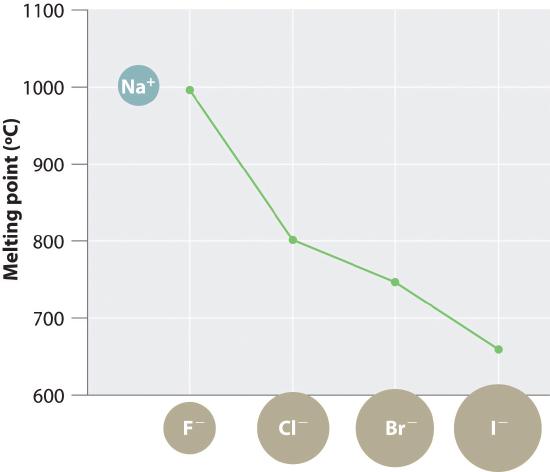 Figure 4.2.3 A Plot of Melting Point versus the Identity of the Halide for the Sodium Halides. The melting points follow the same trend as the magnitude of the lattice energies in Figure 4.2.2.