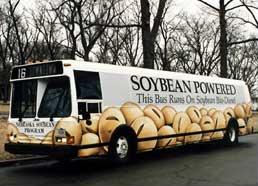 Some cities are converting their bus lines to biodiesel

Common petroleum diesel fuel is a mixure of simple hydrocarbons, with the average chemical formula C12H23 (shown below), but components may range approximately from C10H20 (dodecane) to C15H28(pentadecane).[1] By contrast, biological oils are "triglycerides" (classified as "esters") like the glyceryl trilinoleate shown below:

A biological oil is an ester, which is a type of organic compound having the atom linkage shown below.

The ester linkage in biological oils is created when a glycerol molecule reacts with organic acids. The glycerol molecule has a chain of 3 carbon atoms, each with an -OH (alcohol) group on it. The figure below shows how an organic alcohol reacts with a organic acid. Organic chemists abbreviate molecular structures--the "zig-zag" lines in the figure represent carbon chains with a C atom at each "zig" or "zag". Each carbon has 4 bonds, and if fewer than 4 are shown, it's assumed that they go to H atoms. So the alcohol is C2H5OH (ethanol), and the acid is acetic acid (or ethanoic acid, CH3COOH) in the Figure:

But just as easily as esters can be made from alcohols and acids, they can switch alcohols or acids. In the presence of a strong base catalyst, like NaOH, a triglyceride can react with 3 small alcohol molecules, like methanol (CH3OH), which replace the glycerol "backbone", making 3 separate esters of lower molecular weight

Quite often a mixture of two or more products is formed. For example, when a vegetable oil reacts with methanol, only one or two of the acids may be displaced from the glycerine, producing only 1 or 2 FAMEs.

Usually, a large excess of methanol and sodium hydroxide are added, so that the reaction produces the maximum amount of FAME.

But in the case of a transesterification, even though none of the reactants is completely consumed, no further increase in the amounts of the products occurs. We say that such a reaction does not go to completion. When a mixture of products is produced or a reaction does not go to completion, the effectiveness of the reaction is usually evaluated in terms of percent yield of the desired product. A theoretical yield is calculated by assuming that all the limiting reagent is converted to product. The experimentally determined mass of product is then compared to the theoretical yield and expressed as a percentage:

Solution We must calculate the theoretical yield of NH3, and to do this, we must first discover whether N2 or H2 is the limiting reagent. For the balanced equation

The stoichiometric ratio of the reactants is

Now, the initial amounts of the two reagents are and

The ratio of initial amounts is thus

Since this ratio is less than

We can organize these calculations in a table:

The percent yield is then

Transesterification is a classic example of a reaction which does not go to completion.