Chemotherapy (often abbreviated to chemo and sometimes CTX or CTx) is a type of cancer treatment that uses one or more anti-cancer drugs (chemotherapeutic agents) as part of a standardized chemotherapy regimen. Chemotherapy may be given with a curative intent (which almost always involves combinations of drugs), or it may aim to prolong life or to reduce symptoms (palliative chemotherapy). Chemotherapy is one of the major categories of the medical discipline specifically devoted to pharmacotherapy for cancer, which is called medical oncology.

When fighting cancer, the entire population of neoplastic cells must be eradicated in order to obtain desired results. The concept of "total cell-kill" applies to chemotherapy as it does to other means of treatment: total excision of the tumor is necessary for surgical care, and complete destruction of all cancer cells is required for a cure with radiation therapy.

The available anticancer drugs have distinct mechanisms of action which may vary in their effects on different types of normal and cancer cells. A single "cure" for cancer has proved elusive since there is not a single type of cancer but as many as 100 different types of cancer. In addition, there are very few demonstrable biochemical differences between cancerous cells and normal cells. For this reason the effectiveness of many anticancer drugs is limited by their toxicity to normal rapidly growing cells in the intestinal and bone marrow areas. A final problem is that cancerous cells which are initially suppressed by a specific drug may develop a resistance to that drug. For this reason cancer chemotherapy may consist of using several drugs in combination for varying lengths of time.

Chemotherapy drugs, are sometimes feared because of a patient's concern about toxic effects. Their role is to slow and hopefully halt the growth and spread of a cancer. There are three goals associated with the use of the most commonly-used anticancer agents.

Unfortunately, the majority of drugs currently on the market are not specific, which leads to the many common side effects associated with cancer chemotherapy. Because the common approach of all chemotherapy is to decrease the growth rate (cell division) of the cancer cells, the side effects are seen in bodily systems that naturally have a rapid turnover of cells iincluding skin, hair, gastrointestinal, and bone marrow. These healthy, normal cells, also end up damaged by the chemotherapy program.

In general, chemotherapy agents can be divided into three main categories based on their mechanism of action as shown in the table below.

Table \(\PageIndex{1}\) Chemotherapy Drugs and Their Mechanism of Action

Methotrexate inhibits folic acid reductase which is responsible for the conversion of folic acid to tetrahydrofolic acid. At two stages in the biosynthesis of purines(adenine and guanine) and at one stage in the synthesis of pyrimidines (thymine, cytosine, and uracil), one-carbon transfer reactions occur which require specific coenzymes synthesized in the cell from tetrahydrofolic acid.

5-Fluorouracil (5-FU; Adrucil®, Fluorouracil, Efudex®, Fluoroplex®) is an effective pyrimidine antimetabolite. Fluorouracil is synthesized into the nucleotide, 5-fluoro-2-deoxyuridine. This product acts as an antimetabolite by inhibiting the synthesis of 2-deoxythymidine because the carbon - fluorine bond is extremely stable and prevents the addition of a methyl group in the 5-position. The failure to synthesize the thymidine nucleotide results in little or no production of DNA. Two other similar drugs include: gemcitabine (Gemzar®) and arabinosylcytosine (araC). They all work through similar mechanisms.

There are six groups of alkylating agents: nitrogen mustards; ethylenimes; alkylsulfonates; triazenes; piperazines; and nitrosureas. Cyclosporamide is a classical example of the role of the host metabolism in the activation of an alkylating agent and is one or the most widely used agents of this class. It was hoped that the cancer cells might posses enzymes capable of accomplishing the cleavage, thus resulting in the selective production of an ated nitrogen mustard in the malignant cells. Compare the top and bottom structures in the graphic on the left. 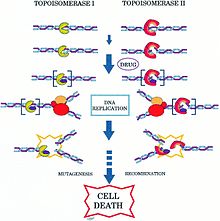 Two topoisomerase I inhibitors, irinotecan and topotecan, are semi-synthetically derived from camptothecin, which is obtained from the Chinese ornamental tree Camptotheca acuminata.  Drugs that target topoisomerase II can be divided into two groups. The topoisomerase II inhibitors include etoposide, doxorubicin, mitoxantrone , teniposide, novobiocin, merbarone, and aclarubicin. In 1965, a major breakthrough in cancer therapy occurred. James F. Holland, Emil Freireich, and Emil Frei hypothesized that cancer chemotherapy should follow the strategy of antibiotic therapy for tuberculosis with combinations of drugs, each with a different mechanism of action. Cancer cells could conceivably mutate to become resistant to a single agent, but by using different drugs concurrently it would be more difficult for the tumor to develop resistance to the combination. Holland, Freireich, and Frei simultaneously administered methotrexate (an antifolate), vincristine (a Vinca alkaloid), 6-mercaptopurine (6-MP) and prednisone — together referred to as the POMP regimen — and induced long-term remissions in children with acute lymphoblastic leukaemia (ALL). With incremental refinements of original regimens, using randomized clinical studies by St. Jude Children's Research Hospital, the Medical Research Council in the UK (UKALL protocols) and German Berlin-Frankfurt-Münster clinical trials group (ALL-BFM protocols), ALL in children has become a largely curable disease.

This approach was extended to the lymphomas in 1963 by Vincent T. DeVita and George Canellos at the NCI, who ultimately proved in the late 1960s that nitrogen mustard, vincristine, procarbazine and prednisone — known as the MOPP regimen — could cure patients with Hodgkin's and non-Hodgkin's lymphoma.

Currently, nearly all successful cancer chemotherapy regimens use this paradigm of multiple drugs given simultaneously, called combination chemotherapy or polychemotherapy.