In thermogravimetric analysis (TGA), a sample is continually weighted while heating, as an inert gas atmosphere is passed over it. Many solids undergo reactions that evolve gaseous byproducts. In TGA, these gaseous byproducts are removed and changes in the remaining mass of the sample are recorded. Three variations are commonly employed: 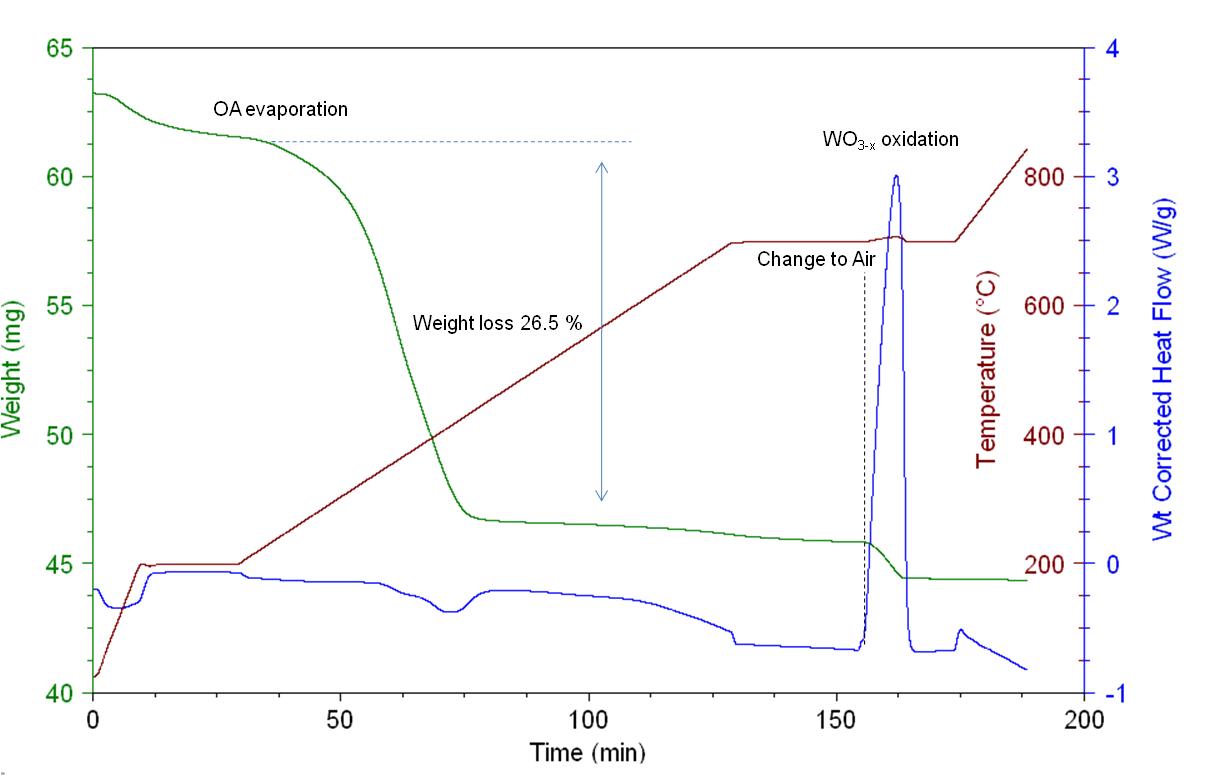 Data from thermogravimetric analysis is often shown by a graph representing mass as a function of temperature for dynamic TGA. For static TGA, mass is instead plotted as a function of time at a given temperature. Quasistatic TGA produces multiple mass vs. time plots for various temperatures. The derivative of the mass change with temperature is often plotted on the same graph to improve ease of identifying the points at which different mass changes occur; especially helpful in cases where multiple decomposition reactions happen in close proximity to one another.

Examples of some characteristic TGA curves for dynamic TGA

In general, mass fluctuations correspond to chemical reactions, with some exceptions. A common example is drying, which can easily be seen as a quick initial drop at the beginning of heating that isn’t known to correspond to any chemical reactions. Evaporation/sublimation may also appear on the plot depending on the material to be analyzed. Multistage decomposition is also common, and shows as a step-like pattern. In some cases, these steps may blend together during dynamic TGA, necessitating either far slower heating rates, or step-wise methods like quasistatic TGA. Note that TGA itself may not be sufficient to identify the decomposition products; chemical testing of the sample after TGA analysis is often required to ascertain the identities of suspected decomposition products. TGA itself does not identify substances; other methods such as chemical testing or differential calorimetry must performed alongside TGA to verify the identity of products.

TGA is vital when designing materials that are intended to withstand high temperatures, as if there is even slight decomposition of the material at a temperature that the material would be expected to encounter, devices made of the material may fail over repeated use. The carefully controlled environment of the TGA analyzer also allows for measuring decomposition reaction kinetics. Differential scanning calorimetry can be incorporated into the TGA analyzer to allow for monitoring potential phase changes. Phase changes generally require addition of heat, yet do not increase the temperature of the sample undergoing a phase change. Furthermore, different phases of a material have different heat capacity, and the temperature change per joule of heat applied will vary with phase. By adding a reference pan to the TGA analyzer, changes in the heat capacity in addition to mass changes can be monitored. In this way, both phase changes and thermal decomposition reactions can be simultaneously measured by TGA.

The authors are looking to use colloidal gels containing only ethanol and Cu3(BTC)2 (BTC = 1,3,5-benzenetricarboxylate) (HKUST-1) nanoparticles as ink for the direct ink writing (DIW) of pure densely packed and self-standing Metal-organic frameworks (MOF) monoliths. Traditionally they are synthesized in powder form. The authors are observing the decomposition behavior of the 3DP-HKUST-1gel (made using DIW) and 3DP-HKUST-1gel-TEA (made by triethylamine-induced HKUST-1 gels). It can be observed in the sudden change in weight over the 100-200 °C for Figure S6b that several side products have formed as oppsed to Figure S6a which shows a much cleaner decomposition. The Figure seen in the paper was Figure 2b, the authors attibute the first weight change (16.2 mg) to residual molecules such as H2O, acetate from the copper (II) acetate monohydrate precursor, and excess ethanolic solvent that is trapped inside the 3DP-HKUST-1gel structure. The second weight change (6.2 mg) was observed at 300 °C and is caused by the decomposition of the organic linkers and network.