X-rays (photons) are shot onto a sample, and when electrons in the sample absorb enough energy, they are ejected from the sample with a certain kinetic energy. The energy of those ejected electrons is analyzed by a detector and a plot of these energies and relative numbers of electrons is produced. Electrons of different energies follow different paths through the detector which allows the computer to differentiate the electrons and produce the spectra seen below. 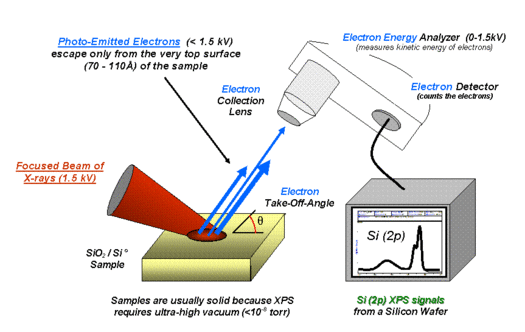 Atoms present in compound being tested by XPS are determined according to the equation:

Here, binding energy is the energy of an electron attracted to a nucleus; photon energy is the energy of X-ray photons being used by the spectrometer, and the kinetic energy is the energy of the ejected electrons from the sample. The work function is a correction factor for the instrument and correlates to the minimum energy required to eject an electron from an atom (see the photoelectric effect for more info, but not necessary to understand this). The work function and photon energy are known and the kinetic energy is measured by the detector. That leaves the binding energy as the only unknown, which can then be determined. As electrons are in orbitals farther from the nucleus, less energy is required to eject them, so the binding energy is lower for higher orbitals. Electrons contained in different subshells (s,p,d, etc.) have different energies as well. By showing the energy of electrons emitted from a material, XPS allows for the composition of a material to be determined.

Additionally, chemical shifts can be determined using XPS. This is owing to the fact that binding energy doesn’t only depend on the shell of the electron. It also depends on the environment, that is, the bonds that the atom in question partake in. Therefore, a primary carbon would have a slightly different binding energy than a carboxyl carbon, for example. 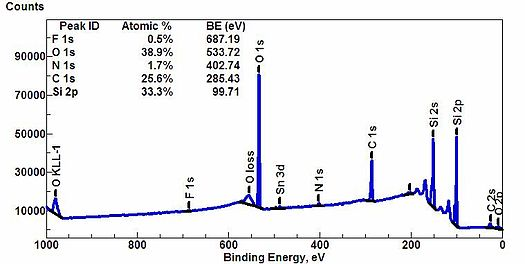 Figure \(\PageIndex{2}\): XPS spectra. Graph showing the binding energies of electrons from different orbitals (F1s, O1s, Si2p, etc.) and their intensities which tell the atomic composition of the sample based on the amounts of each electron from different orbitals present. (Figure courtesy of the creative commons license. Source: https://en.wikipedia.org/wiki/X-ray_photoelectron_spectroscopy).

How to interpret the data it generates

Error/difficulties in reading the spectra

This paper discusses the adsorption of arsenic into aluminum substituted cobalt ferrite. XPS is used to confirm the presence of Al, and then the instrument confirms the oxidation or reduction of arsenic when it is adsorbed into the material.