Atomic force microscopy works by the sample being moved in an X,Y grid beneath a sharp tip attached to the free end of a cantilever being passed along the surface of the material in question. This process is demonstrated in figure 1 below. The cantilever reflects a laser to a photodiode. The contact with the tip to the material can be an atomic scale phenomenon signal from, but the motion of the cantilever is a macro scale movement. This movement is measured by the reflected movement of a laser on the photodiode which is converted to an electrical signal giving information on the measurements. (sometimes there are different ways of measuring the cantilever movement including a direct deflection on an oscillator that converts a change from equilibrium into an electrical signal.) 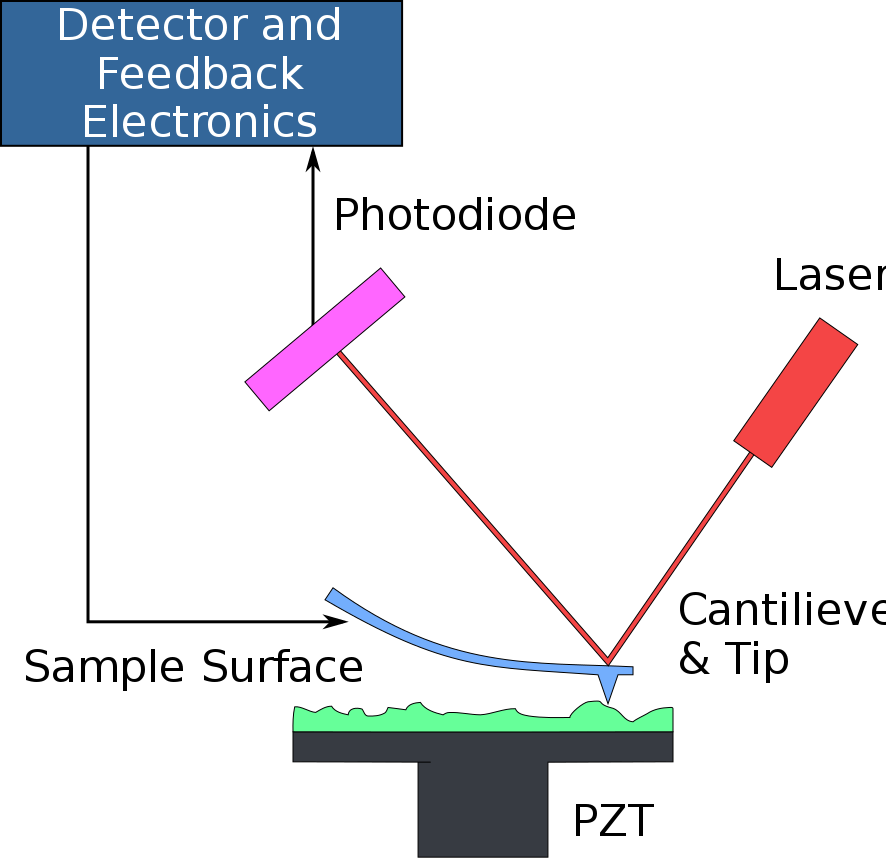 AFM can also be used for force spectroscopy when the cantilever is extended towards the material and the disruption to the cantilever is disrupted giving information on nanoscale forces such as atomic bonding and van der waals forces.

For imaging purposes, the data is usually presented as a topographical “heat map” with a colored scale to show height/depth and a scale for the X,Y plane to show measurements between peaks/valleys etc. Interpreting the data specifically depends on the type of imaging and the material being imaged, but the general output shows the topography with information on smoothness as well as “hardness” due to differing forces experienced by the tip during the scan.

For force microscopy, force curve readouts are available to correspond with loci on the sample giving the ability to correlate the forces with topography.

ERROR: A common source of error to consider is the shape and sharpness of the tip with regard to the surface morphology (as shown in Figure 2 below). If the radius of the tip is too large the refinement of the measurement may be smoothed. Similarly, due to the nature of the tip, AFM cannot measure steep walls/overhangs.

Figure 2. Showing an AFM artefact arising from a tip with a high radius of curvature with respect to the feature which is to be visualized 3

Figure 3 is from a paper1 that was investigating an organic-inorganic composite of phosphomolybdic acid (PMA) and PEDOT:PSS electron transport layer that is printed on top of the photoactive layer of a semi transparent organic solar cell.