All living cells are surrounded by a cell membrane. Plant cells (Figure \(\PageIndex{1A}\)) and animal cells (Figure \(\PageIndex{1B}\)) contain a cell nucleus that is also surrounded by a membrane and holds the genetic information for the cell. Everything between the cell membrane and the nuclear membrane—including intracellular fluids and various subcellular components such as the mitochondria and ribosomes—is called the cytoplasm. The membranes of all cells have a fundamentally similar structure, but membrane function varies tremendously from one organism to another and even from one cell to another within a single organism. This diversity arises mainly from the presence of different proteins and lipids in the membrane. The lipids in cell membranes are highly polar but have dual characteristics: part of the lipid is ionic and therefore dissolves in water, whereas the rest has a hydrocarbon structure and therefore dissolves in nonpolar substances. Often, the ionic part is referred to as hydrophilic, meaning “water loving,” and the nonpolar part as hydrophobic, meaning “water fearing” (repelled by water). When allowed to float freely in water, polar lipids spontaneously cluster together in any one of three arrangements: micelles, monolayers, and bilayers (Figure \(\PageIndex{2}\)). Micelles are aggregations in which the lipids’ hydrocarbon tails—being hydrophobic—are directed toward the center of the assemblage and away from the surrounding water while the hydrophilic heads are directed outward, in contact with the water. Each micelle may contain thousands of lipid molecules. Polar lipids may also form a monolayer, a layer one molecule thick on the surface of the water. The polar heads face into water, and the nonpolar tails stick up into the air. Bilayers are double layers of lipids arranged so that the hydrophobic tails are sandwiched between an inner surface and an outer surface consisting of hydrophilic heads. The hydrophilic heads are in contact with water on either side of the bilayer, whereas the tails, sequestered inside the bilayer, are prevented from having contact with the water. Bilayers like this make up every cell membrane (Figure \(\PageIndex{3}\)). 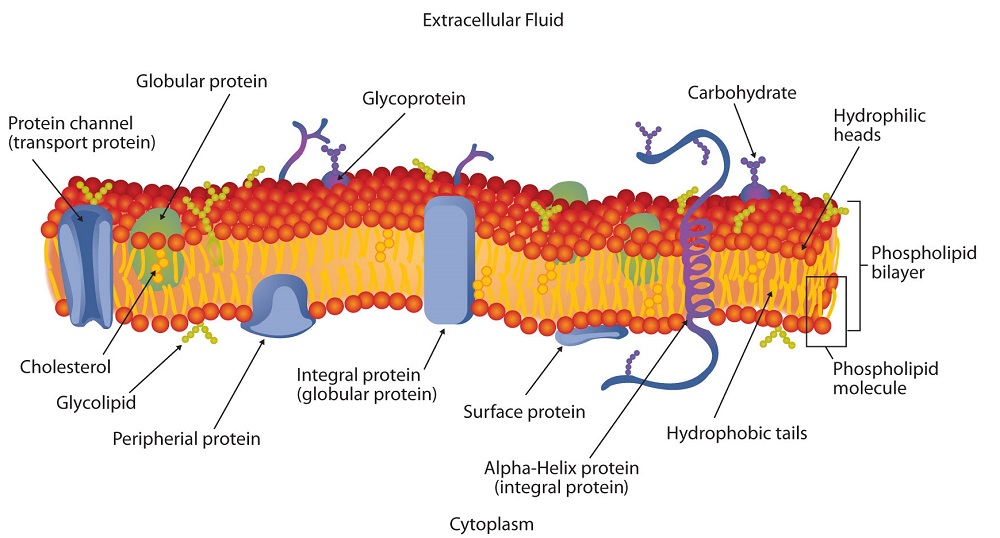 Figure \(\PageIndex{3}\): Schematic Diagram of a Cell Membrane. The membrane enclosing a typical animal cell is a phospholipid bilayer with embedded cholesterol and protein molecules. Short oligosaccharide chains are attached to the outer surface.

In the bilayer interior, the hydrophobic tails (that is, the fatty acid portions of lipid molecules) interact by means of dispersion forces. The interactions are weakened by the presence of unsaturated fatty acids. As a result, the membrane components are free to mill about to some extent, and the membrane is described as fluid.

The lipids found in cell membranes can be categorized in various ways. Phospholipids are lipids containing phosphorus. Glycolipids are sugar-containing lipids. The latter are found exclusively on the outer surface of the cell membrane, acting as distinguishing surface markers for the cell and thus serving in cellular recognition and cell-to-cell communication. Sphingolipids are phospholipids or glycolipids that contain the unsaturated amino alcohol sphingosine rather than glycerol. Diagrammatic structures of representative membrane lipids are presented in Figure \(\PageIndex{4}\). Figure \(\PageIndex{5}\): Phosphoglycerides. (a) Amino alcohols are commonly found in phosphoglycerides, which are evident in its structural formula (b).

There are two common types of phosphoglycerides. Phosphoglycerides containing ethanolamine as the amino alcohol are called phosphatidylethanolamines or cephalins. Cephalins are found in brain tissue and nerves and also have a role in blood clotting. Phosphoglycerides containing choline as the amino alcohol unit are called phosphatidylcholines or lecithins. Lecithins occur in all living organisms. Like cephalins, they are important constituents of nerve and brain tissue. Egg yolks are especially rich in lecithins. Commercial-grade lecithins isolated from soybeans are widely used in foods as emulsifying agents. An emulsifying agent is used to stabilize an emulsion—a dispersion of two liquids that do not normally mix, such as oil and water. Many foods are emulsions. Milk is an emulsion of butterfat in water. The emulsifying agent in milk is a protein called casein. Mayonnaise is an emulsion of salad oil in water, stabilized by lecithins present in egg yolk.

Sphingomyelins, the simplest sphingolipids, each contain a fatty acid, a phosphoric acid, sphingosine, and choline (Figure \(\PageIndex{6}\)). Because they contain phosphoric acid, they are also classified as phospholipids. Sphingomyelins are important constituents of the myelin sheath surrounding the axon of a nerve cell. Multiple sclerosis is one of several diseases resulting from damage to the myelin sheath. Figure \(\PageIndex{6}\): Sphingolipids. (a) Sphingosine, an amino alcohol, is found in all sphingolipids. (b) A sphingomyelin is also known as a phospholipid, as evidenced by the phosphoric acid unit in its structure.

Most animal cells contain sphingolipids called cerebrosides (Figure \(\PageIndex{7}\)). Cerebrosides are composed of sphingosine, a fatty acid, and galactose or glucose. They therefore resemble sphingomyelins but have a sugar unit in place of the choline phosphate group. Cerebrosides are important constituents of the membranes of nerve and brain cells. The sphingolipids called gangliosides are more complex, usually containing a branched chain of three to eight monosaccharides and/or substituted sugars. Because of considerable variation in their sugar components, about 130 varieties of gangliosides have been identified. Most cell-to-cell recognition and communication processes (e.g., blood group antigens) depend on differences in the sequences of sugars in these compounds. Gangliosides are most prevalent in the outer membranes of nerve cells, although they also occur in smaller quantities in the outer membranes of most other cells. Because cerebrosides and gangliosides contain sugar groups, they are also classified as glycolipids.

If membranes were composed only of lipids, very few ions or polar molecules could pass through their hydrophobic “sandwich filling” to enter or leave any cell. However, certain charged and polar species do cross the membrane, aided by proteins that move about in the lipid bilayer. The two major classes of proteins in the cell membrane are integral proteins, which span the hydrophobic interior of the bilayer, and peripheral proteins, which are more loosely associated with the surface of the lipid bilayer (Figure \(\PageIndex{3}\)). Peripheral proteins may be attached to integral proteins, to the polar head groups of phospholipids, or to both by hydrogen bonding and electrostatic forces.

Small ions and molecules soluble in water enter and leave the cell by way of channels through the integral proteins. Some proteins, called carrier proteins, facilitate the passage of certain molecules, such as hormones and neurotransmitters, by specific interactions between the protein and the molecule being transported.

Lipids are important components of biological membranes. These lipids have dual characteristics: part of the molecule is hydrophilic, and part of the molecule is hydrophobic. Membrane lipids may be classified as phospholipids, glycolipids, and/or sphingolipids. Proteins are another important component of biological membranes. Integral proteins span the lipid bilayer, while peripheral proteins are more loosely associated with the surface of the membrane.