The most important commercial reactions of alkenes are polymerizations, reactions in which small molecules, referred to in general as monomers (from the Greek monos, meaning “one,” and meros, meaning “parts”), are assembled into giant molecules referred to as polymers (from the Greek poly, meaning “many,” and meros, meaning “parts”). A polymer is as different from its monomer as a long strand of spaghetti is from a tiny speck of flour. For example, polyethylene, the familiar waxy material used to make plastic bags, is made from the monomer ethylene—a gas.

Some common addition polymers are listed in Table \(\PageIndex{1}\). Note that all the monomers have carbon-to-carbon double bonds. Many polymers are mundane (e.g., plastic bags, food wrap, toys, and tableware), but there are also polymers that conduct electricity, have amazing adhesive properties, or are stronger than steel but much lighter in weight.

An interesting use of polymers is the replacement of diseased, worn out, or missing parts in the body. For example, about a 250,000 hip joints and 500,000 knees are replaced in US hospitals each year. The artificial ball-and-socket hip joints are made of a special steel (the ball) and plastic (the socket). People crippled by arthritis or injuries gain freedom of movement and relief from pain. Patients with heart and circulatory problems can be helped by replacing worn out heart valves with parts based on synthetic polymers. These are only a few of the many biomedical uses of polymers. 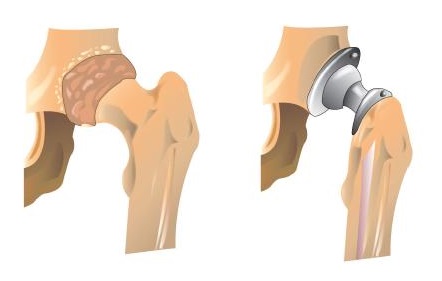 Figure \(\PageIndex{1}\): Hip Joint Replacement. Synthetic polymers are an important part of a hip joint replacement. The hip is much like a ball-and-socket joint, and total hip replacements mimic this with a metal ball that fits in a plastic cup.