Ammonia (NH3) increases the hydroxide ion concentration in aqueous solution by reacting with water rather than releasing hydroxide ions directly. In fact, the Arrhenius definitions of an acid and a base focus on hydrogen ions and hydroxide ions. Are there more fundamental definitions for acids and bases?

Let us use the reaction of ammonia in water to demonstrate the Brønsted-Lowry definitions of an acid and a base. Ammonia and water molecules are reactants, while the ammonium ion and the hydroxide ion are products:

What has happened in this reaction is that the original water molecule has donated a hydrogen ion to the original ammonia molecule, which in turn has accepted the hydrogen ion. We can illustrate this as follows:

Is an Arrhenius acid like hydrochloric acid still an acid in the Brønsted-Lowry sense? Yes, but it requires us to understand what really happens when HCl is dissolved in water. Recall that the hydrogen atom is a single proton surrounded by a single electron. To make the hydrogen ion, we remove the electron, leaving a bare proton. Do we really have bare protons floating around in aqueous solution? No, we do not. What really happens is that the H+ ion attaches itself to H2O to make H3O+, which is called the hydronium ion. For most purposes, H+ and H3O+ represent the same species, but writing H3O+ instead of H+ shows that we understand that there are no bare protons floating around in solution. Rather, these protons are actually attached to solvent molecules.

A proton in aqueous solution may be surrounded by more than one water molecule, leading to formulas like H5O2+ or H9O4+ rather than H3O+. It is simpler, however, to use H3O+.

With this in mind, how do we define HCl as an acid in the Brønsted-Lowry sense? Consider what happens when HCl is dissolved in H2O:

We can depict this process using Lewis electron dot diagrams:

Aniline (C6H5NH2) is slightly soluble in water. It has a nitrogen atom that can accept a hydrogen ion from a water molecule just like the nitrogen atom in ammonia does. Write the chemical equation for this reaction and identify the Brønsted-Lowry acid and base.

C6H5NH2 and H2O are the reactants. When C6H5NH2 accepts a proton from H2O, it gains an extra H and a positive charge and leaves an OH− ion behind. The reaction is as follows:

Caffeine (C8H10N4O2) is a stimulant found in coffees and teas. When dissolved in water, it can accept a proton from a water molecule. Write the chemical equation for this process and identify the Brønsted-Lowry acid and base.

The Brønsted-Lowry definitions of an acid and a base can be applied to chemical reactions that occur in solvents other than water. The following example illustrates.

Sodium amide (NaNH2) dissolves in methanol (CH3OH) and separates into sodium ions and amide ions (NH2−). The amide ions react with methanol to make ammonia and the methoxide ion (CH3O−). Write a balanced chemical equation for this process and identify the Brønsted-Lowry acid and base.

The equation for the reaction is between NH2− and CH3OH to make NH3 and CH3O− is as follows:

Pyridinium chloride (C5H5NHCl) dissolves in ethanol (C2H5OH) and separates into pyridinium ions (C5H5NH+) and chloride ions. The pyridinium ion can transfer a hydrogen ion to a solvent molecule. Write a balanced chemical equation for this process and identify the Brønsted-Lowry acid and base.

To Your Health: Brønsted-Lowry Acid-Base Reactions in Pharmaceuticals

There are many interesting applications of Brønsted-Lowry acid-base reactions in the pharmaceutical industry. For example, drugs often need to be water soluble for maximum effectiveness. However, many complex organic compounds are not soluble or are only slightly soluble in water. Fortunately, those drugs that contain proton-accepting nitrogen atoms (and there are a lot of them) can be reacted with dilute hydrochloric acid [HCl(aq)]. The nitrogen atoms—acting as Brønsted-Lowry bases—accept the hydrogen ions from the acid to make an ion, which is usually much more soluble in water. The modified drug molecules can then be isolated as chloride salts:

where RN represents some organic compound containing nitrogen. The label (sl aq) means “slightly aqueous,” indicating that the compound RN is only slightly soluble. Drugs that are modified in this way are called hydrochloride salts. Examples include the powerful painkiller codeine, which is commonly administered as codeine hydrochloride. Acids other than hydrochloric acid are also used. Hydrobromic acid, for example, gives hydrobromide salts. Dextromethorphan, an ingredient in many cough medicines, is dispensed as dextromethorphan hydrobromide. The accompanying figure shows another medication as a hydrochloride salt. 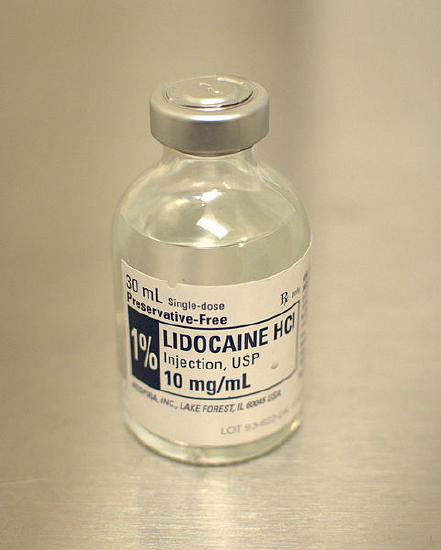 The name of this medicine makes it clear that it exists as the hydrochloride salt. Figure used with permission from Wikipedia.