Source: BiochemFFA_1_2.pdf. The entire textbook is available for free from the authors at http://biochem.science.oregonstate.edu/content/biochemistry-free-and-easy

To understand biochemistry, one must possess at least a basic understanding of organic and general chemistry. In this brief section, we will provide a rapid review of the simple concepts necessary to understand cellular chemistry. Chemistry is chemistry, whether in a cell or outside it, but biological chemistry is a particular subset of organic chemistry that often involves enormous macromolecules, and that happens in the aqueous environment of the cell.

Atoms consist of a nucleus (formed by neutrons and protons) plus electrons moving around the nucleus. In a neutral atom (element), the number of electrons and protons are equal (an atom has zero net charge). The octet rule stipulates that atoms react to form compounds trying to emulate the number of electrons of the noble gas (group 18) closer to their location on the period table; that is, atoms like to be surrounded by 8 electrons (helium being the exception with only two electrons). In order to fulfill the octet rule, atoms have two options: they can either transfer electrons or share electrons.

An ionic bond happens when an metallic element (to the left on the period table) transfers an electron to a non-metallic element (to the right on the period table) forming a cation and an anion, respectively. This ions have opposite charges, so they attract mutually resulting in the formation of an ionic compound. Because of the electrostatic attraction between the ionic net charges, ionic compounds have very high melting and boiling points. and they form crystals at room temperature. The formation of sodium chloride is a typical example of an ionic compound.

Another important characteristic of ionic compounds is that many are soluble in water, due to an intermolecular interaction called ion-dipole (see below). When the ions in an ionic compound get in contact with a polar solvent like water, the ions can interact with this polar solvent, and as the consequence the ionic compound desintegrates forming ions in solutions. This process is called dissociation. Because the ions in solution are free to move, solutions of ionic compounds can conduct the electricity, so they are called electrolytes.  Highly polarized covalent compounds (such as HCl) can also undergo dissociation in water. In this case, the process is called ionization. In ionization, a hydrogen ion (H+) leaves behind its electron as it exits (leaving behind a negative charge on the Cl-).

A covalent compound happens when a nonmetallic element reacts with another nonmetallic element, resulting in an electron sharing to fulfill the octet rule. For example, two atoms of Fluorine can share one pair of electrons resulting in the formation of a F2 molecule. Covalent compounds tend to have lower melting points and lower points than ionic compounds and their physical properties (melting point, boiling point, solubility, etc) depend on the strength of the forces with which different molecules interact with each other. These forces are called intermolecular interactions, which in turn, are related to the electronegativity difference between atoms in a covalent bond (and molecular geometry)

For example, in a molecule of HCl, with hydrogen covalently bonded to chlorine, the electrons are “pulled” toward the chlorine, which is more electronegative. Because of this, there is a slightly greater negative charge near the chlorine atom, compared to the hydrogen (which, correspondingly has a slightly higher positive charge). This unequal charge distribution sets up a permanent dipole, with one side being somewhat negative and the other somewhat positive. Because of this, the molecule is described as polar.

For the most electronegative elements on the period table, that is fluorine, oxygen, and nitrogen (FON), when they are directly attached to hydrogen, the intensity of the electrostatic attraction is so intense that reserves its unique denomination. This intermolecular interaction is known as hydrogen bond. Hydrogen bond is the main type of intermoelcular forces present in HF, NH3, and H2O.  Hydrogen bonds between water molecules are the result of the attraction of the partial positive and partial negative charges on different water molecules (Figure 1.2.4). Hydrogen bonds can also form between hydrogens with a partial positive charge and other strongly electronegative atoms, like nitrogen, with a partial negative charge. It is important to remember that hydrogen bonds are interactions between molecules (or parts of molecules) and are not bonds between atoms, like covalent or ionic bonds. Bonds between hydrogen and carbon do not form significant partial charges because the electronegativities of the two atoms are similar. Consequently, molecules containing many carbon-hydrogen bonds will not form hydrogen bonds and therefore, do not mix well with polar solvents water. These compounds for which the difference of electronegativity between atoms is zero (or almost zero) are known as non-polar covalent compounds. Examples are F2, O2, CO2 (consider the linear molecular geometry here), or CH4. In non-polar compounds, the only possible intermolecular forces result from the mobility of electrons that might generate an uneven distribution of charge, with one atom becoming temporarily more negatively charged and another atom becoming more positively charged. This type of dipoles is very short-lived, and the attraction that results from these dipoles is very weak. This interaction is called London Dispersion Forces (LDF). Although London dispersion forces are weak, they increase with the number of storms, so large molecules can exhibit quite strong LDF. 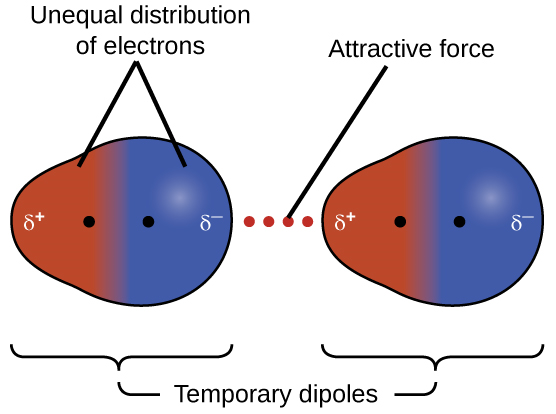 Non-polar molecules with LDF are called hydrophobic because they do not mix well with water. Other polar compounds with the ability to dissolve in water are called hydrophilic. Molecules possessing both characteristics are called amphiphilic.

In compounds with similar molecular mass, the strength of these intermolecular forces decree in the following order:

Organic chemistry os the study of carbon-containing compounds. These compounds are classified according to particular structural features called functional groups.  Figure 1.2.7 shows the various organic functional groups common in biochemistry. You will encounter these functional groups as you study the biosynthetic and breakdown pathways that build and recycle the chemical compounds of which cells are made. In addition to knowing the names and structures of these groups, students need a basic understanding of covalent and ionic bonds.

Covalent bonds, as you know, are the result of sharing of electrons between two atoms. Ionic bonds, by contrast, are formed when one atom donates an electron to another, such as in the formation of sodium chloride. Single covalent bonds can rotate freely, but double bonds cannot. Single bonds around a carbon atom are arranged in a tetrahedron with bond angles of 109.5° relative to each other, with the carbon at the center (Figure 1.19). Double bonded carbons create a planar structure with bond angles typically of about 120°

Oxidation involves loss of electrons (oxidation number increases) and reduction results in the gain of electrons (oxidation number decreases). Oxidation reactions tend to release energy and are a source off energy. Every oxidation is always accompanied by a reduction, so these reactions are called redox reactions. This definition is very useful when dealing with inorganic compounds. However, most molecules encountered in biological systems are organic. When dealing with organic molecules,  we need an easier to identify oxidation and reduction rather than counting oxidation numbers. For organic molecules, oxidation reactions can be understood as the gain of oxygen or the loss of hydrogen atoms. On the other hand, reduction reactions can be understood as the gain of hydrogen atoms, or the loss of oxygen.

Figure 1.2.8. Redox reactions in organic chemistry. The carbon indicated in red is oxidized from left to right, and reduced from right to left.

A carbon has the ability to make four single bonds (forming a tetrahedral structure) and if it bonds to four different chemical groups, their atoms can be arranged around the carbon in two different ways, giving rise to enantiomers (Figure 1.2.9). Each carbon with such a property is referred to as an stereogenic center or chiral carbon. The property of handedness only occurs when a carbon has four different groups bonded to it. Enantiomers are stereoisomers that constitute mirror images from each other. Enantiomers have the same chemical and physical properties, but they differ in their biological properties. Enzymes have very specific 3-D structures, so they can differentiate between stereoisomers or enantiomers. By contrast, molecules made chemically (not using enzymes) end up with equal amounts of both enantiomers, called a racemic mix.

The total energy change in a chemical reaction can be expressed in terms of its free energy change, also known as Gibbs energy (G).

The biological standard Gibbs free energy change (ΔG°’) corresponds to the ΔG for a process under standard conditions of temperature, pressure, and at pH = 7. For a reaction

There two types of chemical reactions. Irreversible reactions are those for which the conversion of reactants into products is close to 100%, meaning that after teh reaction has taken place, almost no reactants remain and all we find in the reaction container are products. These reactions are indicated by a single reaction arrow:

Irreversible reactions are difficult to undo. The same reactioncannot be used to convert product into reactants.

The other type of chemical reactions are reversible. For a reversible reaction, we use a double arrow to indicate that reactants react forming products, but at the same time, products can also react regenerating the reactants:

After a certain time, a container in which a reversible reaction takes place reaches a situation in which the concentration of reactants and product remain constant, since the rate of the forward reactions the rate of the reverse reactions. When this happens, we say that the system has reached equilibrium, and we can define the equilibrium constant, \(K_{eq}\), which is equal to:

Both types of reactions, reversible and irreversible, can be found in biological systems, and therefore, they play a crucial role in maintaining and regulating the metabolic balance.