Source: BiochemFFA_1_1.pdf. The entire textbook is available for free from the authors at http://biochem.science.oregonstate.edu/content/biochemistry-free-and-easy

The Bio of Biochemistry

Biochemistry is the science that explains life at a molecular level. All living things are made of molecules, which in turn, are made of atoms. Molecules can exist in different sizes: they can be small (for example, O2, CO2), medium (for example, C6H12O6, glucose); or large (for example proteins, which are made of millions of atoms)  Molecules are the building blocks to all structures found in living organisms. We can identify four types of biomolecules, that is, molecules common to all cells. These biomolecules are:

One common characteristic of these biomolecules is that they are formed by the association of smaller molecules. Except in the case of lipids, carbohydrates, proteins, and nucleic acids are polymers, that is, large molecules made of smaller units called monomers, linked by covalent bonds. In the case of lipids, monomers do not associate thorough covalent bonds but rather by non-polar intermolecular forces  (London dispersion forces). All cells, no matter what kind, have a plasma membrane that serves as a boundary for the cell, separating it from its surroundings. They also possess a genome made up of DNA that encodes the information for making the proteins required by the cell. To translate the information in the DNA and make the proteins it encodes, all cells have the machinery for protein synthesis, namely, ribosomes and tRNAs. DNA is also the repository of information that gets copied and transmitted to the next generation, allowing living cells to reproduce.

All cells also need to be able to obtain and use energy. The source of this energy is different in different organisms (Figure 1.4). Phototrophs are organisms that obtain metabolic energy from light, while chemotrophs get their energy from the oxidation of chemical fuels. Organisms that can capture energy from light or from chemical sources are termed autotrophs (auto=self, troph=nourishing). Others are heterotrophs, which use, as their energy source, the organic compounds made by other organisms. Plants, and other photosynthetic organisms are autotrophs, while animals are heterotrophs. Cells may be aerobic (i.e., use oxygen) or anaerobic (able to live without oxygen). Some anaerobic cells are obligate anaerobes, that is, they require an environment free of oxygen. Others are facultative anaerobes, cells that can live with, or without, oxygen.

Organisms may be divided into two major groups, the prokaryotes and the eukaryotes. The cells of the former lack a nucleus and other organelles, while those of the latter are characterized by numerous internal, membrane-bounded compartments, including a nucleus. Prokaryotes are unicellular and generally considerably smaller than their eukaryotic cousins, with sizes ranging from 0.5 to 5 µm in diameter. Prokaryotes typically have circular chromosomes, and may sometimes contain extra-chromosomal DNA elements (also Image by usually circular) called plasmids. Although the DNA in prokaryotes is not wrapped around histones, as is the case for eukaryotes, prokaryotes have proteins associated with their DNA. The DNA-protein complexes in prokaryotes create a structure called a nucleoid, which is different from the eukaryotic nucleus in not being enclosed by a nuclear envelope (Figure 1.7). The proteins associated with the DNA in Archaea resemble eukaryotic histones, while those in bacteria are different from both eukaryotic and archaeal DNA packaging proteins.

Prokaryotes may be divided into two broad categories, bacteria and archaea. These single-celled organisms are both ancient and widespread. Archaea were once thought to be a subgroup of bacteria, but have subsequently been shown to be a completely different group of organisms that are so distinct from both bacteria and eukaryotes that they now are classified in a domain of their own.

Like eukaryotic cells, bacterial cells have a plasma membrane surrounding them, but in addition, they also contain an exterior cell wall, comprised of an interlocked peptidoglycan network. On their exterior surfaces, bacteria have hair-like appendages called pili that allow them to adhere to other cells. Pili play an important role in bacterial conjugation, a process in which DNA is transferred between bacterial cells. In addition, bacterial cells may have flagella that enable them to move through their surroundings.

Figure 1.5 - Prokaryotic vs. eukaryotic cell structures (not to scale)

Interestingly, bacteria can communicate, not only with members of their own species, but also with other bacterial species, using chemical signals, in a process called quorum sensing. These signaling mechanisms enable bacteria to assess conditions around them (such as the size of their population). Quorum sensing plays a role in the process of infection by bacterial pathogens as well as the formation of biofilms (mats of cells that adhere to each other tightly and protect the bacteria against environmental hazards or other harmful agents).

The first archaeans to be studied were all found in harsh environments such as salt flats and hot springs. Because of this, they were initially believed to live only in extreme environments and were described as extremophiles (Figure 1.8). We now know that archaeans can be found in every environment, moderate or extreme. Archaea have been found in the human gut, and in such huge numbers in marine plankton that it has been suggested that they may be the most abundant organisms on earth.

While they are unicellular, and superficially resemble bacteria, archaea are in some respects more similar to eukaryotes. Their transcriptional machinery, promoter sequences and ribosomes are much more like those of eukaryotes than of prokaryotes. Archaea are also unique among living organisms in their use of ether linkages to join the lipids used in their plasma membranes to glycerol. Not only are the ether linkages different from the ester linkages in all other forms of life, but the lipids themselves are different. In place of the fatty acids used in both bacterial and eukaryotic membranes, archaea use long isoprene-derived chains (Figure 1.9) This difference in membrane composition and structure makes archaeal membranes highly stable and may be advantageous in extreme conditions. Eukaryotic cells are found in both unicellular and multicellular organizational schemes. Unicellular forms include yeast and many protists, familiar to students from introductory biology labs, like Paramecium and Amoeba. Multicellular eukaryotes include plants, animals, and fungi. Eukaryotic cells are surrounded by a plasma membrane. Animal cells have no cell walls, whereas plant cells use cellulose, hemicellulose, and pectins to build cell walls outside their plasma membranes. Fungal cells have cell walls that are unusual in containing the polymer, chitin, which is also found in the exoskeletons of arthropods. Eukaryotic cells are typically much larger (typically 10-100 µm) and contain considerably more DNA than prokaryotic cells. The most distinctive feature of eukaryotic cells, however, is the presence of a variety of internal membrane-bounded structures, called organelles. The presence of multiple compartments within the cell permits reactions requiring specific conditions to be carried out in isolation from the rest of the cell. For example, the formation of disulfide bonds in proteins is possible in the conditions within the endoplasmic reticulum, but would not readily occur in the different environment of the cytosol. The presence of membrane-bounded compartments also allows reactants to be more concentrated because of the smaller volume of the organelle.

Eukaryotic DNA in a cell is divided into several linear bundles called chromosomes. Chromosomes contain the genomic DNA wrapped around cores of positively charged proteins called histones. The ends of linear eukaryotic chromosomes have telomeres, short (less than 10 bp) sequences repeated thousands of times. The role of telomeres in preventing loss of information when linear chromosomes are replicated is discussed later.

The chromosomes in eukaryotic cells are surrounded by the nuclear envelope, a double membrane structure that encloses the nucleus (Figure 1.12). Within the nucleus, there are enzymes required for the replication and transcription of genetic information. The presence of the nuclear envelope also regulates which proteins can enter the nucleus at any given time. This, as you will see later, is an important way to control gene expression. Mitochondria and chloroplasts have their own DNA, separate from and in addition to the nuclear DNA. This DNA is small and circular and resembles a prokaryotic chromosome. Mitochondria and chloroplasts also have their own ribosomes and tRNAs and can carry out their own protein synthesis. This is not as odd as it seems, because these organelles are likely derived from prokaryotes that once lived as endosymbionts within ancient eukaryotic cells and eventually became integrated into their host cells.

Level of Organization of Living Organisms

The first and most basic level of organization is the cellular level. A cell is the basic unit of life and the smallest unit capable of reproduction. While cells vary greatly in their structure and function based on the type of organism, all cells have a few things in common. Cells are made up of organic molecules, contain nucleic acids (such as DNA and RNA), are filled with fluid called cytoplasm, and have a membrane made out of lipids. Cells also contain many structures within the cytoplasm called organelles, which perform various cellular functions.

Cells may be prokaryotic (without a nucleus) in bacteria and archaea (single-celled organisms), or eukaryotic (with nucleus-enclosing DNA) in plants, animals, protists, and fungi. In humans, most cells combine to form tissues, but some cells are found independent of solid tissues and have their own functions. A red blood cell found circulating in the bloodstream carrying oxygen throughout the human body is an example of an independent cell.

Tissues are a group of similar cells of the same origin that carry out a specific function together. Humans have four different types of basic tissues. Connective tissues such as bone tissue are made up of fibrous cells and give shape and structure to organs. Muscle tissue is made up of cells that can contract together and allow animals to move. Epithelial tissues make up the outer layers of organs, such as the skin or the outer layer of the stomach. Nervous tissue is made of specialized cells that transmit information through electrochemical impulses, such as the tissue of nerves, the spinal cord, and the brain.

An organ is a structure made up of different tissues that perform specific bodily functions. Most organs contain tissues such as parenchyma (used to perform the organ functions), stroma (connective tissue specific to organs) and epithelial. Organs may be solid or hollow, and vary considerably in size and complexity. The heart, lungs, and brain are all examples of organs. 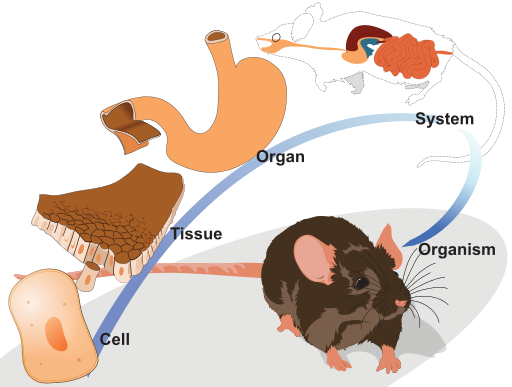 " Levels of Organization of the Human Organism" by LibreTexts is licensed under CC BY-NC-SA .

" Levels of Organization" by LibreTexts is licensed under CC BY-SA .