Let's take 2-hexanone as an example. Picture the carbonyl bond of the ketone group as a spring that is constantly bouncing back and forth, stretching and compressing, pushing the carbon and oxygen atoms further apart and then pulling them together. This is the stretching mode of the carbonyl bond. In the space of one second, the spring 'bounces' back and forth 5.15 x 1013 times - in other words, the ground-state frequency of carbonyl stretching for a the ketone group is about 5.15 x 1013 Hz. Exercise 4.5
Express the wavenumber value of 3000 cm-1 in terms of wavelength (in meter units) frequency (in Hz), and associated energy (in kJ/mol).
Solutions

You will notice that there are many additional peaks in this spectrum in the longer-wavelength 400 -1400 cm-1 region. This part of the spectrum is called the fingerprint region. While it is usually very difficult to pick out any specific functional group identifications from this region, it does, nevertheless, contain valuable information. The reason for this is suggested by the name: just like a human fingerprint, the pattern of absorbance peaks in the fingerprint region is unique to every molecule, meaning that the data from an unknown sample can be compared to the IR spectra of known standards in order to make a positive identification. It was the IR fingerprint region of the suspicious yellow paint that allowed for its identification as a pigment that could not possibly have been used by the purported artist, William Aiken Walker. 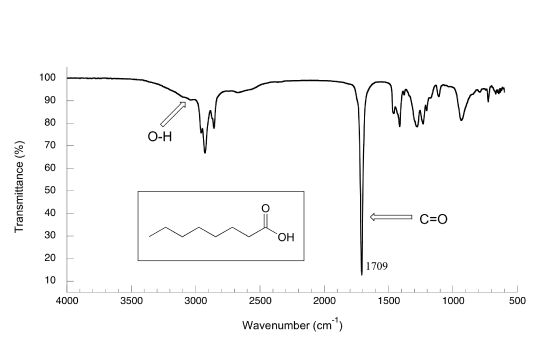 Explain how you could use the C-C and C-H stretching frequencies in IR spectra to distinguish between four constitutional isomers: 1,2-dimethylcyclohexene, 1,3-octadiene, 3-octyne, and 1-octyne.

Using the online Spectral Database for Organic Compounds, look up IR spectra for the following compounds, and identify absorbance bands corresponding to those listed in the table above. List actual frequencies for each signal to the nearest cm-1 unit, using the information in tables provided on the site.

A carbon-carbon single bond absorbs in the fingerprint region, and we have already seen the characteristic absorption wavelengths of carbon-carbon double and triple bonds. Rationalize the trend in wavelengths. (Hint - remember, we are thinking of bonds as springs, and looking at the frequency at which they 'bounce').

It is possible to identify other functional groups such as amines and ethers, but the characteristic peaks for these groups are considerably more subtle and/or variable, and often are overlapped with peaks from the fingerprint region. For this reason, we will limit our discussion here to the most easily recognized functional groups, which are summarized in table 1 in the tables section at the end of the text.

As you can imagine, obtaining an IR spectrum for a compound will not allow us to figure out the complete structure of even a simple molecule, unless we happen to have a reference spectrum for comparison. In conjunction with other analytical methods, however, IR spectroscopy can prove to be a very valuable tool, given the information it provides about the presence or absence of key functional groups. IR can also be a quick and convenient way for a chemist to check to see if a reaction has proceeded as planned. If we were to run a reaction in which we wished to convert cyclohexanone to cyclohexanol, for example, a quick comparison of the IR spectra of starting compound and product would tell us if we had successfully converted the ketone group to an alcohol (this type of reaction is discussed in detail in chapter 15.