As described previously, whether a covalent substance is a solid, a liquid, or a gas at room temperature depends on the relative strength of its intermolecular forces (IMFs) compared to the kinetic energies (KE) of its molecules at room temperature. When the IMFs are stronger than the KE, the molecules tend to be close together, with very restricted ability to move, then the substance is likely to be a solid. When the IMF and the KE are similar in magnitude, the molecules can move, bet their movement is limited to short distances, so the covalent compound is likely to be liquid. When the IMFs are very weak compared to the KE, the attraction between molecules is minimal, so the molecules can move freely. Therefore the substance is most likely to be a gas.

Table \(\PageIndex{1}\) shows the boiling point and melting for some substances and the forces that must be overcome in each case.

We can see that breaking chemical bonds requires much more energy than overcoming intermolecular forces. There a few places in the universe in which the temperature is high enough to have ionic or metallic compounds in gas or liquid phase. Some examples,  the magma produced by volcanos have a high content of Fe2O3 in a liquid state, while the sun contains some metals in gas state (iron, magnesium, etc) 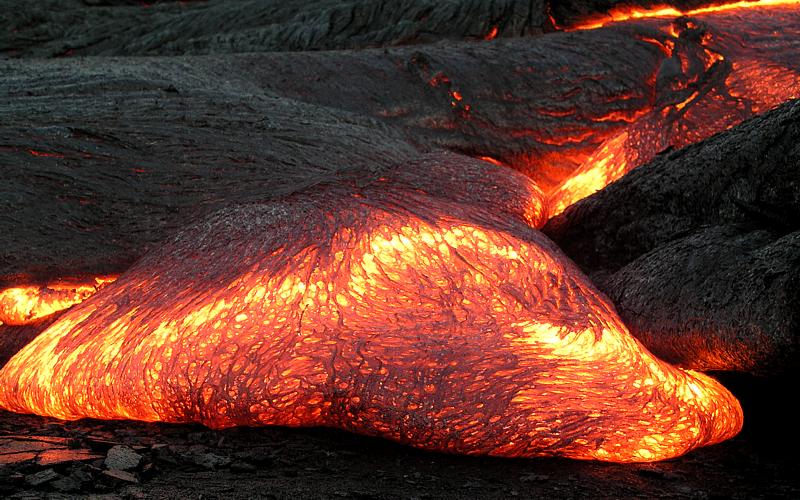 Table \(\PageIndex{2}\) shows the solubility values for a series of substances in water, a polar solvent

As we can see, the solubility values increase when the intermolecular interactions between the solvent and solute molecule become stronger. Switching the solvent into a non-polar one, such as carbon tetrachloride (CCl4), carbon disulfide (CS2) or hexane (C6H6) will certainly show the opposite trend in solubility for ten above listed substances.

The viscosity of a liquid is a measure of its resistance to flow. It is similar to the concept of "thickness". For example, maple syrup has a higher viscosity than sweet tea. Viscosity can be measured in units of millipascal-second (mPa·s). As the intensity of intermolecular forces increases, so does the viscosity.  Table \(\PageIndex{3}\) shows the viscosity values for a series of liquid substances.

The next time you are by a still body of water, take a close look at what is scooting along on the surface. You may see insects seemingly floating on top of the water. These creatures are known by a variety of names including water skaters, water striders, pond skaters, and other equally descriptive names. They take advantage of a property called surface tension to stay above the water and not sink. The force they exert downward is less than the forces exerted among the water molecules on the surface of the pond, so the insect does not penetrate beneath the surface of the water.

Molecules within a liquid are pulled equally in all directions by intermolecular forces. However, molecules at the surface are pulled downwards and sideways by other liquid molecules, but not upwards away from the surface. The overall effect is that the surface molecules are pulled into the liquid, creating a surface that is tightened like a film (Figure \(\PageIndex{3A}\)). The surface tension of a liquid is a measure of the elastic force in the liquid's surface. Liquids that have strong intermolecular forces, like the hydrogen bonding in water, exhibit the greatest surface tension. Surface tension allows objects that are denser than water, such as the paper clip shown in B in the figure below, to nonetheless float on its surface. It is also responsible for the beading up of water droplets on a freshly waxed car because there are no attractions between the polar water molecules and the nonpolar wax.

Other liquids, such as diethyl ether, do not demonstrate strong surface tension interactions. The intermolecular forces for the ether are the relatively weak dipole-dipole interactions that do not draw the molecules together as tightly as hydrogen bonds would.