When a molecule absorbs a photon in the ultraviolet or visible (UV VIS) region (180 - 780 nm), an electronic transition occurs within the molecule. This transition involves moving an electron from the singlet ground state to a singlet excited state. After excitation, the molecule will undergo de-excitation to regain its ground state electronic configuration. De-excitation of the molecule can occur in three distinct ways: by collisional deactivation (external conversion), fluorescence, or phosphorescence (Figure 4.1).

The first relaxation mechanism, collisional deactivation, occurs when the excited molecule transfers its excess energy to molecules with which it collides without photon emission. The second mechanism, fluorescence, involves the electron returning from the excited singlet state to the ground singlet state accompanied by the emission of a photon of lower energy (longer wavelength) than the absorbed photon; the energy loss is due to vibrational relaxation while in the excited state. When fluorescence is favored, it occurs within about 10-8 seconds after absorption. For reference, a picosecond is 10-9 seconds. Phosphorescence, the third route for de-excitation, occurs when the excited electron enters the lowest triplet state from the excited singlet state by intersystem crossing and subsequently emits a photon in returning from the lowest triplet state to the singlet ground state. These excited singlet-triplet and triplet- ground singlet transitions involve electron reversal (Figure 4.2), which is a low probability occurrence. Thus, the time between absorption and phosphorescence can be from 10-2 seconds to several minutes. Figure 4.1: Jablonski diagram displaying excitation and de-excitation pathways of a molecule. λ0 indicates the incident wavelength that is absorbed by the molecule. Once the molecule reached the excited singlet state (S1) from the ground state singlet (S0), is can experience vibrational relaxation as seen in A. After relaxing to the lowest energy excited state, a molecule can de-excited by fluorescence as seen in path B. The fluorescence path emits a wavelength (λf) which is longer than the absorbed wavelength (λ0). The alternative, unfavored path moves along path C which involves intersystem crossing. Intersystem crossing involves a conversion from an excited singlet state(S1) to an excited triplet state (T1). After reaching the triplet state and experiencing vibrational relaxing, the molecule will phosphoresce by emitting an even shorter wavelength (λp) to reach the ground state singlet (S0). 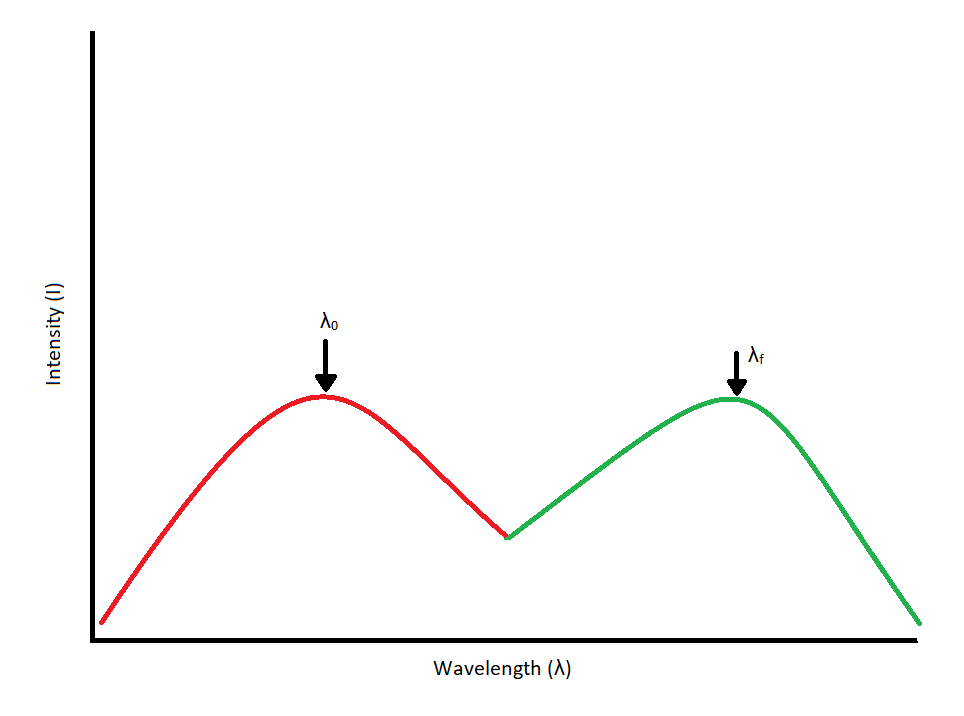 Figure 4.4: Excitation/Absorbance Spectrum (Red) coupled with an emission spectrum (Green). Each spectrum peaks at its

respective wavelength. Excitation and emission spectra should overlap and be mirror images of each other.

Coupling the above techniques with a relationship between fluorescence intensity and concentration would be exceptionally useful. Such a relationship can be derived from Beer's Law, which states that the fraction of light intensity transmitted by a sample is

where \(k\) is a proportionality constant. If dilute solutions are used, so that less than 2% of the excitation energy is absorbed, the exponential term in Equation \(\ref{4}\) can be approximated by the first two terms in the corresponding Taylor series expansion

In this experiment, two instruments will be used. First, the Agilent HP8453 UV-Vis spectrometer to measure optimal excitation wavelength. You used this instrument in CHE 105, so you may remember how to use it. For the second portion of this experiment, the Varian Eclipse Fluorescence Spectrometer (Figure 4.5) will be used. This instrument is computer-controlled through software running on Windows XP. Detailed operating instructions for the Eclipse will be in the procedure section. 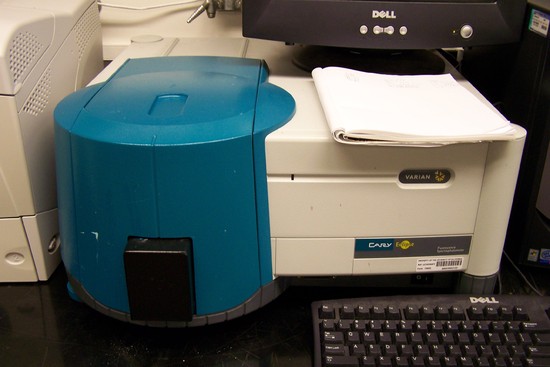 This experiment involves the analysis of vitamin B2, riboflavin, by measuring its native fluorescence. Riboflavin (Figure 4.6) is a common water-soluble vitamin found in eggs, milk, and other foods, that strongly fluoresces and is very sensitive to light. Its two predominant irradiation decomposition products are lumichrome and lumiflavin, which are themselves highly fluorescent. Figure 4.6: Riboflavin (A) and the two most predominant irradiation decomposition products, lumiflavin (B) and lumichrome (C).

The analysis method requires working with riboflavin samples at concentrations well below the part per million (ppm) level. Therefore, it is extremely important that the utmost care is exercised in cleaning and handling all of the glassware and solutions during this experiment.

The second lab period should be used to complete the experiment and Part II of the unknown analysis.

The dry milk sample should be reconstituted as indicated on the jar. Record your work (this is a quantitative experiment). The milk samples require special treatment in order to remove interfering fats and proteins, which would otherwise make analysis difficult or impossible. The procedure to accomplish this is outlined below.

The instrument you'll be using in this portion of the experiment is an Agilent HP8453 UV-Vis spectrometer.

Look near the Agilent HP8453 UV-Vis spectrometer for a pack of cuvettes. If you cannot find a pack, ask your T.A. for a new pack. Use the 10 ppm solution to obtain an absorption spectrum of riboflavin from 280 to 600 nm. Use distilled water as your reference solution. If you do not recall how to acquire an absorbance spectrum, check with your TA for instructions. The wavelength of maximum absorbance should be used as an initial excitation wavelength. There may be more than one absorbance peak.

You should collect the following spectra:

At two excitation wavelengths (both ~370 and ~440 nm) you determine the exact wavelengths to use.