When atoms are excited they emit light of certain wavelengths which correspond to different colors. The emitted light can be observed as a series of colored lines with dark spaces in between; this series of colored lines is called a line or atomic spectra. Each element produces a unique set of spectral lines. Since no two elements emit the same spectral lines, elements can be identified by their line spectrum.

According to the wave particle duality concept, although electromagnetic radiation is often considered to be a wave, it also behaves like a particle. In 1900, while studying black body radiation, Max Planck discovered that energy was limited to certain values and was not continuous as assumed in classical physics. This means that when energy increases, it does so by tiny jumps called quanta (quantum in the singular). In other words, a quantum of energy is to the total energy of a system as an atom is to the total mass of a system. In 1905, Albert Einstein proposed that energy was bundled into packets, which became known as photons. The discovery of photons explained why energy increased in small jumps. If energy was bundled into tiny packets, each additional packet would contribute a tiny amount of energy causing the total amount of energy to jump by a tiny amount, rather than increase smoothly as assumed in classical physics.

Wavelength, or the distance from one peak to the other of a wave, is most often measured in meters, but can be measured using other SI units of length where practical. The number of waves that pass per second is the frequency of the wave. The SI unit for frequency is the Hertz (abbreviated Hz). 1 Hz is equal to 1s-1. The speed of light is constant. In a vacuum the speed of light is 2.99792458 x 108 ms-1. The relationship between wavelength (λ), frequency (ν), and the speed of light (c) is:

The energy of electromagnetic radiation of a particular frequency is measured in Joules and is given by the equation:

The electron volt is another unit of energy that is commonly used. The electron volt (eV) is defined as the kinetic energy gained by an electron when it is accelerated by a potential electrical difference of 1 volt. It is equal to 1.60218 x 10-19 J.

A spectrum is a range of frequencies or wavelengths. By the process of refraction, a prism can split white light into it's component wavelengths. However this method is rather crude, so a spectroscope is used to analyze the light passing through the prism more accurately. The diagram to the right shows a simple prism spectroscope (click to enlarge). The smaller the difference between distinguishable wavelengths, the higher the resolution of the spectroscope. The observer (shown as an eye in the diagram) sees the radiation passing through the slit as a spectral line. To obtain accurate measurements of the radiation, and electronic device often takes the place of the observer, the device is then called a spectrophotometer. In more modern Spectrophotometers, a diffraction grating is used instead of a prism to disperse the light.

How Atoms React when Excited by Light When light is shone on an atom, its electrons absorb photons which cause them to gain energy and jump to higher energy levels. The higher the energy of the photon absorbed, the higher the energy level the electron jumps to. Similarly, an electron can go down energy levels by emitting a photon. The simplified version of this principal is illustrated in the figure to the left based on the Bohr model of the Hydrogen atom. The energy of the photon emitted or gained by an electron can be calculated from this formula:

Since an electron can only exist at certain energy levels, they can only emit photons of certain frequencies. These specific frequencies of light are then observed as spectral lines. Similarly, a photon has to be of the exact wavelength the electron needs to jump energy levels in order to be absorbed, explaining the dark bands of an absorption spectra.

As discussed above, when an electron falls from one energy level in an atom to a lower energy level, it emits a photon of a particular wavelength and energy. When many electrons emit the same wavelength of photons it will result in a spike in the spectrum at this particular wavelength, resulting in the banding pattern seen in atomic emission spectra. The graphic to the right is a simplified picture of a spectrograph, in this case being used to photograph the spectral lines of Hydrogen. 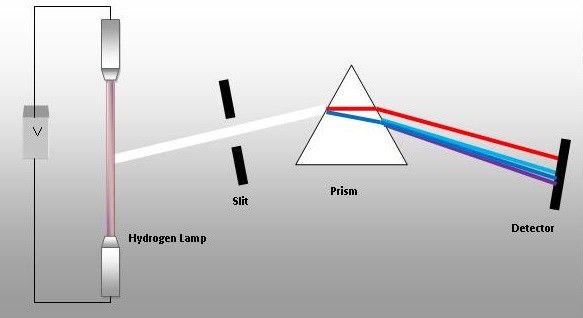 In this spectrograph, the Hydrogen atoms inside the lamp are being excited by an electric current. The light from the lamp then passes through a prism, which diffracts it into its different frequencies. Since the frequencies of light correspond to certain energy levels (n) it is therefore possible to predict the frequencies of the spectral lines of Hydrogen using an equation discovered by Johann Balmer.

Where \(n\) must be a number greater than 2. This is because Balmer’s formula only applies to visible light and some longer wavelengths of ultraviolet.

The frequencies in this region of Hydrogen’s atomic spectra are called the Balmer series. The Balmer series for Hydrogen is pictured to the left. There are several other series in the Hydrogen atom which correspond to different parts of the electromagnetic spectrum. The Lyman series, for example, extends into the ultraviolet, and therefore can be used to calculate the energy of to n=1.

When an electron jumps from a low energy level to a higher level, the electron will absorb a photon of a particular wavelength. This will show up as a drop in the number of photons of this wavelength and as a black band in this part of the spectrum. The figure to the right illustrates a mechanism to detect an absorption spectrum. A white light is shone through a sample. The atoms in the sample absorb some of the light, exciting their electrons. Since the electrons only absorb light of certain frequencies, the absorption spectrum will show up as a series of black bands on an otherwise continuous spectrum.

Atomic spectroscopy has many useful applications. Since the emission spectrum is different for every element, it acts as an atomic fingerprint by which elements can be identified. Some elements were discovered by the analysis of their atomic spectrum. Helium, for example, was discovered while scientists were analyzing the absorption spectrum of the sun. Emission spectra is especially useful to astronomers who use emission and absorption spectra to determine the make up of far away stars and other celestial bodies.

1.)Using the Balmer equation, find the frequency of the radiation corresponding to n=3.

2.) What is the frequency of the spectral line produced when an electron moves from n=5 to n=2 in a Hydrogen atom?

We simply plug in the given values for n and the Rhydberg constant for Hydrogen:

Next, we rearrange equation 2 to solve for frequency (v):

Then plug in the values for E and h:

We then substitute equation 1 into equation 2 to get this equation:

We convert the wavelength of the photon to meters, and then plug it into the equation

We then use this value to find the frequency (v).

We then use equation 6 to find the energy level:

4.) A photon with a wavelength of 397nm is emitted from an electron in energy level 7 of a Hydrogen atom. What is the new energy level of the electron?

We then substitute equation 1 into equation 2 to get this equation:

We convert the wavelength of the photon to meters, and then plug it into the equation

Plug the values previously calculated into the equation:

To figure out the energy level (n), we can plug our En final into equation number 3:

We solve for n, and get:

Plug in the values:

6.) What frequency of light would be needed to make an electron in a Hydrogen atom jump from n=1 to n=3 ?

We next use equation5 to find the frequency of the photon that must be absorbed.

7.)A spectral line is measured to have a wavelength of 1000nm. Is this within the Balmer series?

No, the Balmer series does not extend into the infrared.