Nuclear Chain Reactions are a simple, yet powerful method which to produce both constructive and destructive forces. Only understood to a significant degree within the last century, nuclear chain reactions have many practical uses in the modern era. Chain reactions can be addressed into two categories: first, controlled (like a nuclear power plant) and uncontrolled (an atomic bomb). Both are motivated by fission reactions, which are elaborated in this section.

The neutron was discovered by Sir James Chadwick in 1932. In 1939 atomic fission had been discovered by Lise Meitner (1878 to 1968) with her nephew Otto Frisch and was documented in her paper Disintegration of Uranium by Neutrons. A New Type of Nuclear Reaction where the term fission was coined. On December 2, 1942 Dr. Enrico Fermi, a Nobel Prize winner, produced the first sustained chain reaction at the University of Chicago. His assumption was that said reactions produce transuranium products. Otto Hahn and F. Strassmann reproduced Fermi's experiments and found contrary. By 1943 the first controlled chain reaction had taken place and by 1945, the first atomic weapon was produced. By 1951 nuclear chain reactions took a more practical route and became a means to produce electric power. 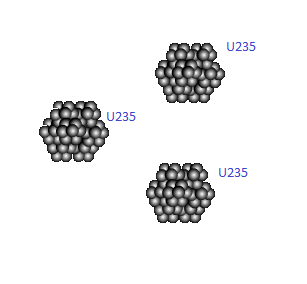 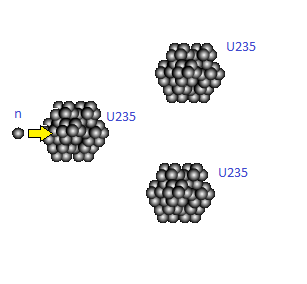 Figure 3. Observe that the first Uranium atom undergoes distortion of its nucleus and momentarily becomes U236. The elements which the daughter nuclei are composed of is based upon probability (compare the fragments of Figures 4 and 5).

Understanding Fission is the key for chain reactions. Hence, below is a brief overview of the different aspects of fission. Below are scientific approaches to fission reactions, and the process which fission is produced. Fission Products can be produced by alpha, gamma, beta, charged particles, and through spontaneous reactions. A fission product is affected by the initial mass of nuclide, and excitation energy (expressed in MeV).

Yield is the result is for any fission event, and is highly motivated by probability. This section covers experimental yields and charge yields. The yield can be expressed in two different experimental categories:

which can be expressed by the equation:

(this process is through natural decay, where Element A decomposes to Element C)

Note: Sum of total yields for binary fission will be 200%

Relative Yield \( \gamma_i\) is the ratio of absolute yields formed in fission, which can be expressed through the equation:

where \(\gamma_i\) is the relative yield, Yi is the absolute yield of specific nuclide, which is daughter to a specific nuclei Y also expressed as a yield. Relative yield also has respective independent, cumulative, total yields.

where Z is proton number, Zp is approximately the charge ratio of the parent nuclide , and c is a number between 0.8 and 1.0 (depending on fission reaction).

Fission products behave in specific trends, for example: fission is almost always a binary process, as ternary fission is on average 1000 less times probable (In most cases Ternary fission will appear for 1 to 3 events per 1000). Being able to predict the outcome of a fission event is vital for harvesting nuclear energy from power plants. Other trends that can be found is the nature of symmetric and asymmetric fission products. Fission will be symmetric or asymmetric depending on how many nucleons are required to form closed shells. Symmetric peaks can coexist in asymmetric peaks, such as Ra226. Also, a symmetric mass distribution leads to an asymmetric fission process. Note that asymmetric and Symmetric fission are both present in heavy nuclides.

Asymmetric Fission Products: The preferred form of fission leading to two daughter nuclides of unequal masses. Asymmetric fission has an average yield 600 times greater than symmetric fission. Number of outer nucleons drastically affects shape of nucleus, which in turn may change the nature of fission symmetry. The probability of asymmetric fission is high for fission motivated by thermal neutrons (such as U233, U235, Pu239).

An unstable nucleus by the liquid drop model can be expressed in the inequality:

Which for any proton number Z and Atomic Mass A, holding this inequality to be true will release energy through symmetric fission. A notable exception is Zr50 which upon the border of this inequality is stable. Although bear in mind that the above inequality is limited because of binding energy and therefore is extremely slow if not impossible. A far more probable inequality would is:

Which the second inequality holds for half-lives for super heavy atoms. Note that spontaneous Fission is extremely rare for even radioactive samples.

Fission According to 'Chance'

The major energy of fission lies in the kinetics of the daughter nuclides. The magnitude of the kinetic energy is equal to the coulomb potential energy of fragments. The rest of the energy is released in excitation energy, which is usually neutron emission, and finally gamma radiation for the residual energy. Yield of neutrons that accompany fission is usually a linear relationship expressed as: 1 neutron to 8.5 MeV. A neutron on average carries 5.5 MeV in binding energy and 1.5 MeV in Kinetic energy. Hence, 7 MeV. Neutron yield of lighter fragments is three times greater than heavier fragments.

One of the best examples of Chain reactions is within nuclear power plants. As a fact, nuclear power provides 17 percent of the world's electricity. There are many types of reactors, which all use realatively the same materials, and components to complete a nuclear fission chain reaction.

International Nuclear Event Scale (INES): The scale is written by degree of danger (lower in the list is greater danger)