Reactions are often monitored by some form of spectroscopy. In spectroscopy, "light" or some other frequency of electromagnetic radiation passes through a reaction sample. The light interacts with the molecules in the sample, which absorb particular frequencies of light. Less light exits the sample than the amount that entered it; the amount that exits is measured by a detector on the other side.

It is simple to calibrate the instrument to determine concentration from the amount of light absorbed. In addition, the light may interact with the reactant molecules and product molecules in different ways. This means that the absorption frequency of the reactants, and not the products, can be monitored, and thus changes in reactant concentration can be measured. This also works for the products..

The rate of reaction is written as:

In other words, the rate is equal to the change in concentration of product with change in time.

The rate of the reaction can also be written as follows:

The rate is the change in concentration of reactant with change in time. The negative sign indicates that the reactant is being consumed over time as it turns into product, so its concentration is decreasing.

Kinetic studies are important in understanding reactions. Not only are they important in industry, but they are also used to understand biological processes, especially enzyme-catalyzed reactions. They also play a role in environmental and atmospheric chemistry, as part of an effort to understand a variety of issues ranging from the fate of prescription pharmaceuticals in wastewater to the cascade of reactions involved in the ozone cycle.

Often in studying reaction kinetics, the changing concentration of a reactant or a product is plotted against time. In one method, many data points are collected very early in a reaction (when fewer than 5% of the material has reacted), and the slope of the resulting line is used to determine the "initial rate." Explain why this method might not work if the data points are plotted all the way until the reaction is finished. 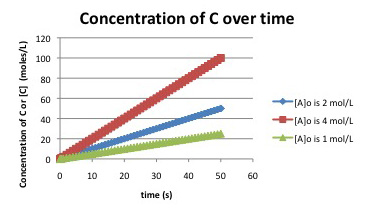 What can be determined about the rate law for the reaction? 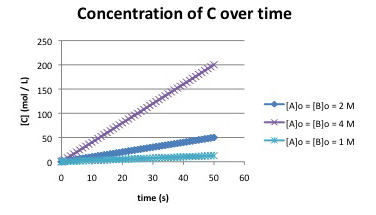 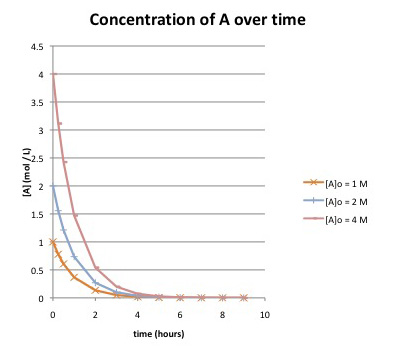 a) How long does it take until the reaction is essentially finished, if the starting concentration of A is:

b) What can be determined about the rate law for the reaction? Explain. 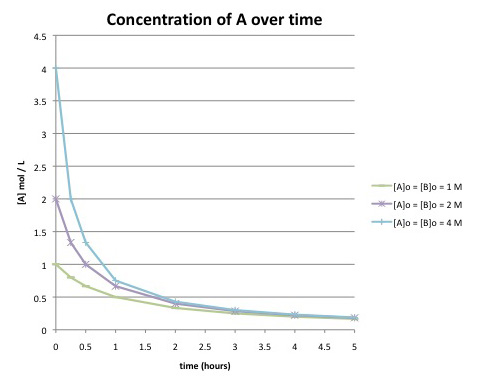 Compare this graph to the one in the previous problem. What are the differences in the curves? Does this reaction has the same rate law as the previous one?