Imagine that there is a special type of mine. This mine is simply an explosive with some charged components on top of it. The circles with positive and negative charges in them are the charged components. If the electric field of the electric components are significantly disturbed, the mine triggers and explodes. The disarming device is positively charged. To disarm the mine, the disarming device must take the path of least electric resistance and touch the first charged mine component on this path. Deviating from this minimal energy path will cause a significant disturbance and the mine will explode. The specific charged components within the mine are known.

Q. How do you disarm the following mine? The mine with positive charge and negative charge.

A. Touch the bottom most portion of negatively charged component, red, with the disarming device. 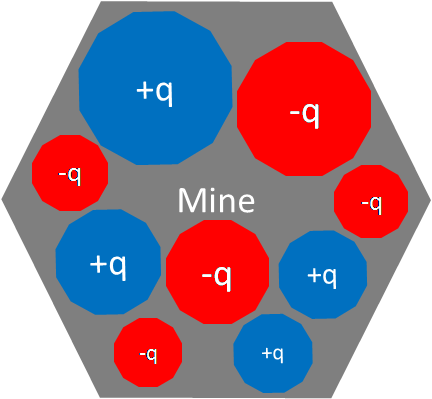 Note: the size of the component is directly related to the magnitude of the charge.

There is no equation that would simply provide an answer. A sequence of electrostatic energy equations must be carried out. To solve this problem, measure the energy required to touch the every single point on the surfaces of these component. Then find the minum value calculated to find your answer. But note the variability in distance. Each starting point would result in a different energy value. Scientists found a way to factor out this variability by using Potential Energy.

Thus the potential energy is solely the force acting on the particle at the final distance times the distance the particle is from the source of the field.Thus the equation for electrostatic potential energy is Coulomb's law times the radius which, simplified, is the equation shown below. This is equivalent to the definite integral of Coulomb’s Law integrated from infinity to the final position.

Why Use Electrostatic Potential Maps?

The total energy of a pathway is the sum of the energies of the particle interacting with every electric field producing component along the pathway. It requires the sum of nine separate electric potential equations to find the electric potential at one point. Each position on the surface of the components experiences a different total potential energy. To get an accurate indication of the absolute minimum energy, presume it would take ten readings per component. There are nine components, ten readings per component, and ten calculations per reading. To find the total range of potential energies would take 900 calculations.

How do you go about using 900 sets of data? You could graph it, the electrostatic potentials are clear pieces of data, but creating coordinates that correspond to specific locations on specific charged components is a complicated process that convolutes the interpretation of the data.

The best way to represent this data is to map it, imposing the data onto a model that is analogous to the real object to preserve the spatial coordinates of the data. It would then be possible to place the electrostatic potential values with their corresponding positions. But it would be inconvenient to analyze the trends of 900 numerical electrostatic potentials on a map. To resolve this issue, a color spectrum could be incorporated.

Here is what a very hypothetical electrostatic potential map of the complicated mine would look like: 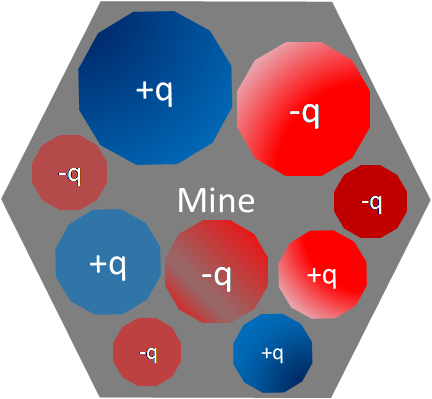 Touch the mine component that corresponds to the reddest portion of the electrostatic potential map to disarm it.

In the hypothetical scenario, the surface of the mine was a definite point. Molecules do not have such a definite surface. Scientists resolved this issue by picking a radial value that they believed would best approximate the size and shape of the molecule as it interacts with other molecules. This radial value is actually a particular electron density, .002 e/(a0)3, where a0 is the Bohr radius. Given that the radial value of the isosurface is dependent on the electron density, larger molecules with more electrons will have larger isosurface values than smaller molecules with fewer electrons. The radial value of the isosurface is the radius value that will be used in the electrostatic potential energy equations.

Note that as larger molecules have larger isosurfaces they have have larger electrostatic potential maps as well.

One of the major similarities is that, like with mines, the charged components of molecules are known. The nuclei are known, the number and charges of the electrons are known, and quantum mechanics provides a statistically satisfactory indication of where these charged components are located. Consequently, the electrostatic potential energy integration of Coulomb's law can be used to calculate the electrostatic potential energy of various regions along the isosurface of the molecule. However, the nature of electron clouds and electron sharing between atoms in a molecule convolutes calculations. Trying to calculate how each electron and each nucleus interacts with one another is complicated. But computational calculations, like Mulliken Population Analysis, can be used to find the net charge on each atom and simplify calculations. That is not to say that it is impossible to calculate the interactions between every nucleus and every electron with the test charge. It is possible, but it would take a great deal of quantum mechanical calculations. Note that the more rigorous the computations the better the model.

Another important similarity is that both mines and molecules use a positive test charge to calculate electrostatic potential energies. The appropriate data can then be input into the integration of Coulomb's law to find the electrostatic values of various points along the isosurface of the molecule.

The purpose of assessing the electrostatic potential of a mine from the previous section was to find the disarming site. Similarly, in chemistry, one of the purposes of finding the electrostatic potential is to find the reactive site of a molecule. The reactive site is a particularly charged region of a molecule that has an affinity for interacting with charged particles.

If the mine were a molecule, the mine would have been attracting a positive charge, the disarming device, to its reactive site, the region of least electrostatic potential energy resistance. Similarly, a molecule that has a region of very low potential energy would have a very strong influence on positively charged particles or regions of particles nearby. Knowledge of the molecular reactive site enables scientists to predict how simple molecules interact with other molecules. But, as with our hypothetical mines, electrostatic potential maps also illustrate the reactive sites of complex molecules whose polarity is not easy to intuitively deduce. Electrostatic potential maps may look intimidating at first, but they are not very complicated. Here is a nice illustration that conveys these concepts: Now that you know how to approach these diagrams. It is time to analyze them.

The most important thing to consider when analyzing an electrostatic potential map is the charge distribution. The relative distributions of electrons will allow you to deduce everything you need to know from these maps. Consequently, you will want to be very familiar with principles of electronegativity. Recall the relationship between electrostatic potential and charge distribution. Areas of low potential, red, are characterized by an abundance of electrons. Areas of high potential, blue, are characterized by a relative absence of electrons. Oxygen has a higher electronegativity value than sulfur. Oxygen atoms would consequently have a higher electron density around them than sulfur atoms. Thus the spherical region that corresponds to an oxygen atom would have a red portion on it. Now note that there are two oxygen atoms in sulfur dioxide. There are two sphere shaped objects that have red regions. These areas correspond to the location of the oxygen atoms. The blue tainted sphere at the top corresponds to the location of the sulfur atom.

Electrostatic potential maps can also be used to determine the nature of the molecules chemical bond. Consider this diagram again: 2. The following diagram is an electrostatic potential map of phosphoric acid. What regions correspond to atoms of oxygen, hydrogen, and phosphorous respectively? 3. The following electrostatic potential diagram, the ball and stick model in the center is simply a convenience, depicts a molecule composed of chlorine and oxygen. What is the structural formula? 4. Indicate the region of greatest electronegativity: 5. Which molecule has a greater electronegativity difference? Here is the molecular diagram of phosphoric acid:

3. The molecular formula of the diagram is \(ClO_2\). This can be deduced from the electronegativity values of the chlorine and oxygen.

4. The red region of this diagram corresponds to region of greatest electronegativity.