This picture is an image of a Centaur from Sphinx Stargate. The Centaur is a race of monsters in Greek mythology, a hybrid animal having the head, arms and torso of a man united to the body and legs of a horse. Mixing a number of atomic orbitals to form the same number of hybrid orbitals to explain chemical bonding and shapes and molecular structures is a rather recent myth.

The most significant development in the first half of the 20th century is the human's ability to understand the structure of atoms and molecules. Computation has made mathematical concepts visible to the extent that we now can see the atomic and molecular orbitals. On the other hand, using everyday encountered materials or toys can also generate beautiful illustrations of hybrid atomic orbitals.

The valence bond (VB) approach is different from the molecular orbital (MO) theory. Despite their differences, most of their results are the same, and they are interesting.

The valence-bond approach considers the overlap of the atomic orbitals (AO) of the participating atoms to form a chemical bond. Due to the overlapping, electrons are localized in the bond region.

The solution to the Schrodinger Equation provides the wave functions for the following atomic orbitals:

For atoms containing two or more electrons, the energy levels are shifted with respect to those of the \(\ce{H}\) atom. An atomic orbital is really the energy state of an electron bound to an atomic nucleus. The energy state changes when one atom is bonded to another atom.

At this level, we consider the following hybrid orbitals: 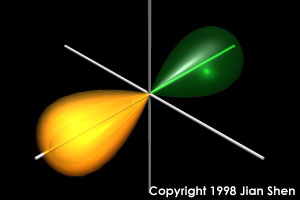 The sp hybrid atomic orbitals are possible states of electrons in an atom, especially when it is bonded to others. These electron states have half 2s and half 2p characters. From a mathematical viewpoint, there are two ways to combine the 2s and 2p atomic orbitals:

These energy states (sp1 and sp2) have a region of high electron probability each, and the two atomic orbitals are located opposite to each other, centered on the atom. The sp hybrid orbitals are represented by this photograph.

You may say that the concept of hybridizing AOs for the bonding is just a story made up to explain the molecular shape of \(\ce{Cl-Be-Cl}\). You are right! The story is lovely and interesting, though.

In general, when two and only two atoms bond to a third atom and the third atom makes use of the sp hybridized orbitals, the three atoms are on a straight line. For example, sp hybrid orbitals are used in the central atoms in the molecules shown on the right. The energy states of the valence electrons in atoms of the second period are in the 2s and 2p orbitals. If we mix two of the 2p orbitals with a 2s orbital, we end up with three sp2 hybridized orbitals. These three orbitals lie on a plane, and they point to the vertices of a equilateral triangle as shown here.

When the central atom makes use of sp2 hybridized orbitals, the compound so formed has a trigonal shape. \(\ce{BF3}\) is such a molecule:

Not all three sp2 hybridized orbitals have to be used in bonding. One of the orbitals may be occupied by a pair or a single electron. If we do not count the unshared electrons, these molecules are bent, rather than linear. The three molecules shown together with the \(\ce{BF3}\) molecule are such molecules.

Carbon atoms also makes use of the sp2 hybrid orbitals in the compound \(\ce{H2C=CH2}\). In this molecule, the remaining p orbital from each of the carbons overlaps to form the additional pi, p, bond. When sp3 hybrid orbitals are used for the central atom in the formation of a molecule, the molecule is said to have the shape of a tetrahedron.

As are the cases with sp2 hybrid orbitals, one or two of the sp3 hybrid orbitals may be occupied by non-bonding electrons. Water and ammonia are such molecules.

According the the VSEPR theory, the lone electron pairs require more space, and the \(\ce{H-O-H}\) angle is 105 degrees, less than the ideal tetrahedral angle of 109.5 degrees.

The five dsp3 hybrid orbitals resulted when one 3d, one 3s, and three 3p atomic orbitals are mixed. When an atom makes use of five dsp3 hybrid orbitals to bond to five other atoms, the geometry of the molecule is often a trigonal bipyramidal. For example, the molecule PClF4 displayed here forms such a structure. In this diagram, the \(\ce{Cl}\) atom takes up an axial position of the trigonalbipyramid. There are structures in which the \(\ce{Cl}\) atom may take up the equatorial position. The change in arrangement is accomplished by simply changing the bond angles. This link discusses this type of configuration change of this molecule.

Some of the dsp3 hybrid orbitals may be occupied by electron pairs. The shapes of these molecules are interesting. In \(\ce{TeCl4}\), only one of the hybrid dsp3 orbitals is occupied by a lone pair. This structure may be represented by \(\ce{TeCl4E}\), where \(\ce{E}\) represents a lone pair of electrons. Two lone pairs occupy two such orbitals in the molecule \(\ce{BrF3}\), or \(\ce{BrF3E2}\). These structures are given in a VSEPR table of 5 and 6 coordinations. There are also cases that some of the d2sp3 hybrid orbitals are occupied by lone pair electrons leading to the structures of the following types:

No known compounds of \(\ce{AX3E3}\) and \(\ce{AX2E4}\) are known or recognized, because they are predicted to have a T shape and linear shape respectively when the lone pairs of electrons are ignored.

While the hybridized orbitals were introduced in the foregoing discussion, the Valence-shell Electron-pair Repulsion (VSEPR) Model was included to suggest the shapes of various molecules. Specifically, the VSEPR model counts unshared electron pairs and the bonded atoms as the VSEPR number. A single-, double- and tripple-bond is considered as 1. After having considered the hybridized orbitals and the VSEPR model, we can not take a systematic approach to rationalize the shapes of many molecules based on the number of valence electrons.

A summary in the form of a table is given here to account for the concepts of hybrid orbitals, valence bond theory, VSEPR, resonance structures, and octet rule. In this table, the geometric shapes of the molecules are described by linear, trigonal planar, tetrahedral, trigonal bypyramidal, and octahedral. The hybrid orbitals use are sp, sp2, sp3, dsp3, and d2sp3.

This table correlates a lot of interesting chemical concepts in order to understand the molecular structures of these compounds or ions. There are some intriqueing chemical relationships among the molecules in each column for you to ponder.

Trigonal bipyramidal and octahedral molecules have 5 and 6 VSEPR pairs. When the central atoms contain more than 5 or 6 electrons, the extra electrons form lone pairs. The number of lone pairs can easily be derived using Lewis dot structures for the valence electrons.

Which atom in the formula is usually the center atom?

Usually, the atom in the center is more electropositive than the terminal atoms. However, the \(\ce{H}\) and halogen atoms are usually at the terminal positions because they form only one bond.

Take a look at the chemical formulas in the table, and see if the above statement is true.

However, the application of VSEPR theory can be expanded to complicated molecules such as

By applying the VSEPR theory, one deduces the following results: