There are often several factors that can influence the course of a reaction. Probably the most important is the structure of the alkyl halide, but the solvent can also play a role.

The crucial difference between SN1 and SN2 reacions is the ionization step in the SN1 pathway. Factors that stabilize ions, and assist in ionization, promote this pathway.

The most polar solvents tend to be those that are capable of hydrogen bonding, such as water and alcohols. These are sometimes called "polar, protic solvents." The "protic" part refers to hydrogen bonding; in hydrogen bonding, the hydrogen atom attached to a very electronegative oxygen or nitrogen develops a significant positive charge, like a proton.

Polar, protic solvents can stabilize ions through very strong intermolecular attractions. The protic hydrogen can strongly interact with anions, whereas the lone pair on the oxygen atom can stabilize cations.

These stabilizing interactions can strongly stabilize the intermediates in SN1 reactions. In the same way, the transition state leading into the intermediate is also significantly stabilized. The barrier for this reaction is lowered and the reaction can occur more quickly.

The following are a baker's dozen of potential solvents. 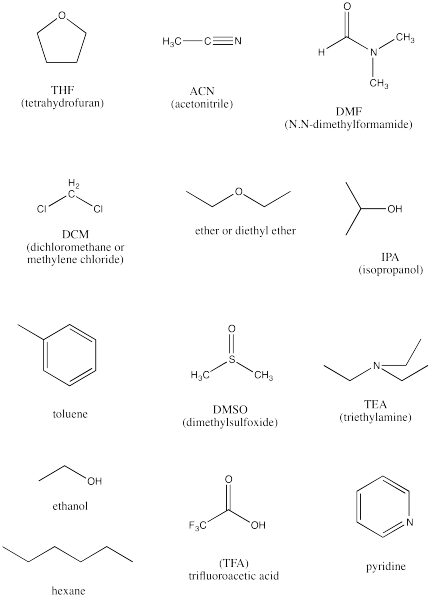 Describe the SN1 reaction as slow, medium or fast in the following cases.

Describe the SN2 reaction as slow, medium or fast in the following cases.