An organic structure that consists of a hydroxyl group (OH) attached to a carbon which is also part of a double bond is called an enol. This is because it consists of an alkene and an alcohol at the same time. Such arrangement is susceptible to a rearrangement called tautomerization.

Tautomerization is a shift of the hydroxyl hydrogen to carbon 2 of the alkene, and viceversa. This means that it is an equilibrium process which is either acid or base catalyzed. In the acid-catalyzed tautomerization, the alkene acts as a base and a proton from the acid is added to the p-bond with formation of the most stable carbocation.

The second resonance structure shows what is essentially a protonated ketone. The positive charge on oxygen makes the proton highly acidic. It is readily lost to a base (water for example) to yield the free ketone.

The net equilibrium can be represented as in the example below. In the absence of special stabilizing factors, equilibrium usually favors the “keto” form (so called, even though it could be an aldehyde) over the enol form. The tautomerizaton process can also be base-catalyzed. In this case the base takes up the acidic proton from the hydroxyl group, leading to formation of an enolate ion, which becomes reprotonated at the carbon atom.

The second resonance structure shows what is essentially a ketone. 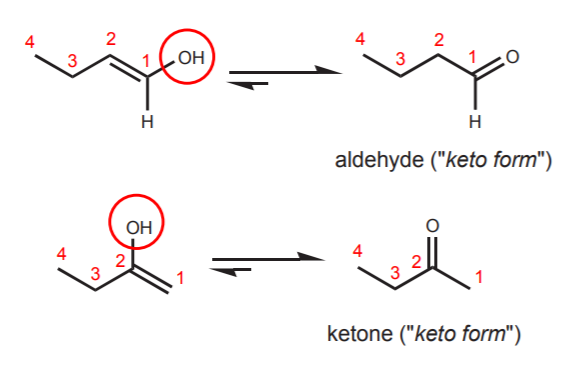 Of course, when the hydroxyl group is attached to a cyclic structure, the “keto form” is always a ketone. The two forms in equilibrium constitute a tautomeric pair, and they are referred to as tautomers. Needless to say, tautomers are not resonance structures. They are independent species in equilibrim with each other. To be tautomers, the two species must feature a central carbon which in the enol form contains both the hydroxyl group and the alkene, and in the keto form contains the carbonyl group. In the above example that carbon is number 1. The example below shows species which are NOT tautomers. The carbon that contains the hydroxyl group (or the carbonyl group) is not the same as the carbon that contains the double bond.