Alkenes are primarily prepared by elimination reactions of molecules that contain good leaving groups attached to sp3 carbons. Examples of such reactions are dehydrohalogenations with strong base, and acid-catalyzed dehydrations of alcohols. The opposite of an elimination is an addition reaction. In an addition reaction an alkene adds elements to each of the carbons involved in the π-bond, resulting in formation of sp3 carbons from sp2 carbons. This is one of the most important types of reactions that alkenes undergo.

Another important type of reaction involving alkenes is oxidative cleavage. In such reactions the carbon-carbon π-bond is completely broken by the action of an oxidizing agent, resulting in more oxidized forms of carbon, such as aldehydes, ketones, and carboxylic acids. All these reactions are covered in chapter 8 of the Wade text, 4th ed.

The following is a summary of the most important representative types of these reactions. For full details, please refer to the textbook.

The addition of these substances to an alkene proceeds by an ionic mechanism, with formation of the most stable carbocation. Therefore, it follows Markovnikov’s Rule.

Produces Markovnikov alcohols, it is an equilibrium reaction, and proceeds with formation of carbocations in the rate-determining step.

This sequence consists of two steps. It is the most effective way to prepare Markovnikov alcohols from alkenes.

This sequence also consists of two steps. It is the most effective way to prepare anti-Markovnikov alcohols from alkenes. The components of water (H/OH) add to the π-bond with syn-stereochemistry. If chiral centers result from this reaction, the product is obtained as an enantiomeric mixture.

This reaction is performed most frequently with bromine and chlorine. It adds a halogen atom to each of the two carbons comprising the π-bond with anti-stereochemistry. If chiral centers result from this reaction, the product is obtained as an enantiomeric mixture.

6. HALOGEN ADDITION IN THE PRESENCE OF WATER

(halohydrin formation). Produces Markovnikov alcohols with a neighboring halogen. The OH and the halogen add with anti -stereochemistry. If chiral centers result from this reaction, the product is obtained as an enantiomeric mixture.

Adds two hydroxyl groups accross the π-bond with syn-stereochemistry. It can be performed with two reagent mixtures: pot assium permanganate in basic medium, or osmium tetroxide in the presence of hydrogen peroxide. If chiral centers result from this reaction, the product is obtained as an enantiomeric mixture. 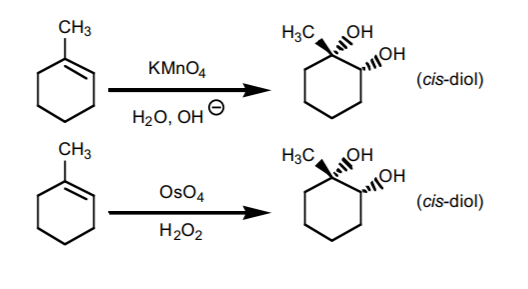 Adds two hydroxyl groups accross the π-bond with anti-stereochemistry. It proceeds in two steps via an epoxide (three-membered ring ether). If chiral centers result from this reaction, the product is obtained as an enantiomeric mixture.

Adds hydrogen accross the π-bond with syn-stereochemistry. It basically transforms an akene into an alkane.

yields ketones and/or carboxylic acids, depending on whether the carbon in question is in the middle of a chain or at the end of a chain in the product. Similar to the above, but it yields only carbonyl compounds (aldehydes or ketones). Ozone is required for the reaction, but the other reagent may vary from one context to another. 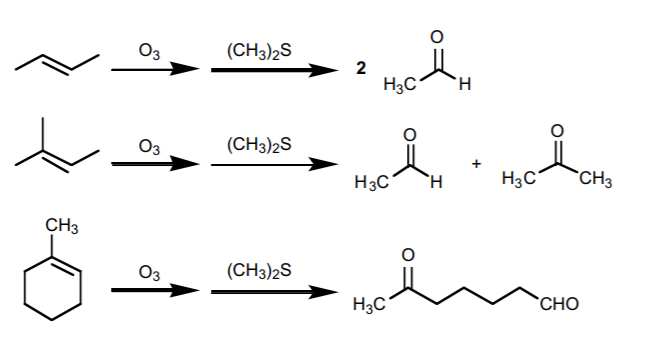