Practically every time there are pi bonds in a molecule, especially if they form part of a conjugated system, there is a possibility for having resonance structures, that is, several valid Lewis formulas for the same compound. What resonance forms show is that there is electron delocalization, and sometimes charge delocalization. All the examples we have seen so far show that electrons move around and are not static, that is, they are delocalized. Charge delocalization is a stabilizing force because it spreads energy over a larger area rather than keeping it confined to a small area. Since electrons are charges, the presence of delocalized electrons brings extra stability to a system compared to a similar system where electrons are localized. The stabilizing effect of charge and electron delocalization is known as resonance energy.

Since conjugation brings up electron delocalization, it follows that the more extensive the conjugated system, the more stable the molecule (i.e. the lower its potential energy). If there are positive or negative charges, they also spread out as a result of resonance.The corollary is that

the more resonance forms one can write for a given system, the more stable it is. That is, the greater its resonance energy.

Examine the following examples and write as many resonance structures as you can for each to further explore these points:

Let’s look for a moment at the three structures in the last row above. In the first structure, delocalization of the positive charge and the pi bonds occurs over the entire ring. This becomes apparent when we look at all the possible resonance structures as shown below.

In the second structure, delocalization is only possible over three carbon atoms. This is demonstrated by writing all the possible resonance forms below, which now number only two. 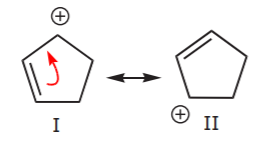