Polymers are long chain giant organic molecules are assembled from many smaller molecules called monomers. Polymers consist of many repeating monomer units in long chains. A polymer is analogous to a necklace made from many small beads (monomers). Many monomers are alkenes or other molecules with double bonds which react by addition to their unsaturated double bonds.

The electrons in the double bond are used to bond two monomer molecules together. This is represented by the red arrows moving from one molecule to the space between two molecules where a new bond is to form. The formation of polyethylene from ethylene (ethene) may be illustrated in the graphic on the left as follows. In the complete polymer, all of the double bonds have been turned into single bonds. No atoms have been lost and you can see that the monomers have just been joined in the process of addition. A simple representation is -[A-A-A-A-A]-. Polyethylene is used in plastic bags, bottles, toys, and electrical insulation.

Table 1: Links to various polymers with Chime molecule - Macrogalleria at U. Southern Mississippi

All the monomers from which addition polymers are made are alkenes or functionally substituted alkenes. The most common and thermodynamically favored chemical transformations of alkenes are addition reactions. Many of these addition reactions are known to proceed in a stepwise fashion by way of reactive intermediates, and this is the mechanism followed by most polymerizations. A general diagram illustrating this assembly of linear macromolecules, which supports the name chain growth polymers, is presented here. Since a pi-bond in the monomer is converted to a sigma-bond in the polymer, the polymerization reaction is usually exothermic by 8 to 20 kcal/mol. Indeed, cases of explosively uncontrolled polymerizations have been reported.

It is useful to distinguish four polymerization procedures fitting this general description.

Virtually all of the monomers described above are subject to radical polymerization. Since this can be initiated by traces of oxygen or other minor impurities, pure samples of these compounds are often "stabilized" by small amounts of radical inhibitors to avoid unwanted reaction. When radical polymerization is desired, it must be started by using a radical initiator, such as a peroxide or certain azo compounds. The formulas of some common initiators, and equations showing the formation of radical species from these initiators are presented below.

By using small amounts of initiators, a wide variety of monomers can be polymerized. One example of this radical polymerization is the conversion of styrene to polystyrene, shown in the following diagram. The first two equations illustrate the initiation process, and the last two equations are examples of chain propagation. Each monomer unit adds to the growing chain in a manner that generates the most stable radical. Since carbon radicals are stabilized by substituents of many kinds, the preference for head-to-tail regioselectivity in most addition polymerizations is understandable. Because radicals are tolerant of many functional groups and solvents (including water), radical polymerizations are widely used in the chemical industry.

In principle, once started a radical polymerization might be expected to continue unchecked, producing a few extremely long chain polymers. In practice, larger numbers of moderately sized chains are formed, indicating that chain-terminating reactions must be taking place. The most common termination processes are Radical Combination and Disproportionation. These reactions are illustrated by the following equations. The growing polymer chains are colored blue and red, and the hydrogen atom transferred in disproportionation is colored green. Note that in both types of termination two reactive radical sites are removed by simultaneous conversion to stable product(s). Since the concentration of radical species in a polymerization reaction is small relative to other reactants (e.g. monomers, solvents and terminated chains), the rate at which these radical-radical termination reactions occurs is very small, and most growing chains achieve moderate length before termination.

The relative importance of these terminations varies with the nature of the monomer undergoing polymerization. For acrylonitrile and styrene combination is the major process. However, methyl methacrylate and vinyl acetate are terminated chiefly by disproportionation.

Another reaction that diverts radical chain-growth polymerizations from producing linear macromolecules is called chain transfer. As the name implies, this reaction moves a carbon radical from one location to another by an intermolecular or intramolecular hydrogen atom transfer (colored green). These possibilities are demonstrated by the following equations

Chain transfer reactions are especially prevalent in the high pressure radical polymerization of ethylene, which is the method used to make LDPE (low density polyethylene). The 1º-radical at the end of a growing chain is converted to a more stable 2º-radical by hydrogen atom transfer. Further polymerization at the new radical site generates a side chain radical, and this may in turn lead to creation of other side chains by chain transfer reactions. As a result, the morphology of LDPE is an amorphous network of highly branched macromolecules.

Polymers may also be classified as straight-chained or branched, leading to forms such as these:

The monomers can be joined end-to-end, and they can also be cross-linked to provide a harder material:

If the cross-links are fairly long and flexible, adjacent chains can move with respect to each other, producing an elastic polymer or

Polymerization of isobutylene (2-methylpropene) by traces of strong acids is an example of cationic polymerization. The polyisobutylene product is a soft rubbery solid, Tg = _70º C, which is used for inner tubes. This process is similar to radical polymerization, as demonstrated by the following equations. Chain growth ceases when the terminal carbocation combines with a nucleophile or loses a proton, giving a terminal alkene (as shown here).

Monomers bearing cation stabilizing groups, such as alkyl, phenyl or vinyl can be polymerized by cationic processes. These are normally initiated at low temperature in methylene chloride solution. Strong acids, such as HClO4 , or Lewis acids containing traces of water (as shown above) serve as initiating reagents. At low temperatures, chain transfer reactions are rare in such polymerizations, so the resulting polymers are cleanly linear (unbranched).

Treatment of a cold THF solution of styrene with 0.001 equivalents of n-butyllithium causes an immediate polymerization. This is an example of anionic polymerization, the course of which is described by the following equations. Chain growth may be terminated by water or carbon dioxide, and chain transfer seldom occurs. Only monomers having anion stabilizing substituents, such as phenyl, cyano or carbonyl are good substrates for this polymerization technique. Many of the resulting polymers are largely isotactic in configuration, and have high degrees of crystallinity.

In this kind of polymerization, molecular rings are opened in the formation of a polymer. Here epsilon-caprolactam, a 6-carbon cyclic monomer, undergoes ring opening to form a Nylon 6 homopolymer, which is somewhat similar to but not the same as Nylon 6,6 alternating copolymer.

Formation of alternating copolymers is favored when the monomers have different polar substituents (e.g. one electron withdrawing and the other electron donating), and both have similar reactivities toward radicals. For example, styrene and acrylonitrile copolymerize in a largely alternating fashion.

A terpolymer of acrylonitrile, butadiene and styrene, called ABS rubber, is used for high-impact containers, pipes and gaskets.

Several different techniques for preparing block copolymers have been developed, many of which use condensation reactions (next section). At this point, our discussion will be limited to an application of anionic polymerization. In the anionic polymerization of styrene described above, a reactive site remains at the end of the chain until it is quenched. The unquenched polymer has been termed a living polymer, and if additional styrene or a different suitable monomer is added a block polymer will form. This is illustrated for methyl methacrylate in the following diagram.

Symmetrical monomers such as ethylene and tetrafluoroethylene can join together in only one way. Monosubstituted monomers, on the other hand, may join together in two organized ways, described in the following diagram, or in a third random manner. Most monomers of this kind, including propylene, vinyl chloride, styrene, acrylonitrile and acrylic esters, prefer to join in a head-to-tail fashion, with some randomness occurring from time to time. The reasons for this regioselectivity will be discussed in the synthetic methods section. 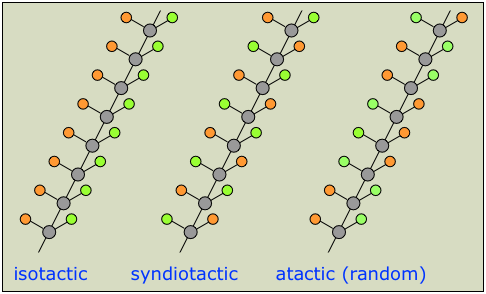 Many common and useful polymers, such as polystyrene, polyacrylonitrile and poly(vinyl chloride) are atactic as normally prepared. Customized catalysts that effect stereoregular polymerization of polypropylene and some other monomers have been developed, and the improved properties associated with the increased crystallinity of these products has made this an important field of investigation. The following values of Tg have been reported.

The properties of a given polymer will vary considerably with its tacticity. Thus, atactic polypropylene is useless as a solid construction material, and is employed mainly as a component of adhesives or as a soft matrix for composite materials. In contrast, isotactic polypropylene is a high-melting solid (ca. 170 ºC) which can be molded or machined into structural components.

An efficient and stereospecific catalytic polymerization procedure was developed by Karl Ziegler (Germany) and Giulio Natta (Italy) in the 1950's. Their findings permitted, for the first time, the synthesis of unbranched, high molecular weight polyethylene (HDPE), laboratory synthesis of natural rubber from isoprene, and configurational control of polymers from terminal alkenes like propene (e.g. pure isotactic and syndiotactic polymers). In the case of ethylene, rapid polymerization occurred at atmospheric pressure and moderate to low temperature, giving a stronger (more crystalline) product (HDPE) than that from radical polymerization (LDPE). For this important discovery these chemists received the 1963 Nobel Prize in chemistry.

Ziegler-Natta catalysts are prepared by reacting certain transition metal halides with organometallic reagents such as alkyl aluminum, lithium and zinc reagents. The catalyst formed by reaction of triethylaluminum with titanium tetrachloride has been widely studied, but other metals (e.g. V & Zr) have also proven effective. The following diagram presents one mechanism for this useful reaction. Others have been suggested, with changes to accommodate the heterogeneity or homogeneity of the catalyst. Polymerization of propylene through action of the titanium catalyst gives an isotactic product; whereas, a vanadium based catalyst gives a syndiotactic product.