Enzymes called kinases catalyze the transfer of phosphoryl groups to organic molecules. The source of the phosphoryl group in most phosphorylation reactions is a molecule called adenosine triphosphate, abbreviated ATP.

Notice that there are essentially three parts to the molecule: an adenine nucleoside base, a five-carbon sugar (ribose), and a triphosphate group. The three phosphates are designated by Greek letters a, b, and g. Adenosine diphosphate (ADP) and adenosine monophosphate (AMP) are also important players in the reactions of this chapter.

You will see ATP, ADP, and AMP abbreviated in many different ways in this text and throughout the biochemical literature. For example, the three structures below are all abbreviated depictions of ATP: 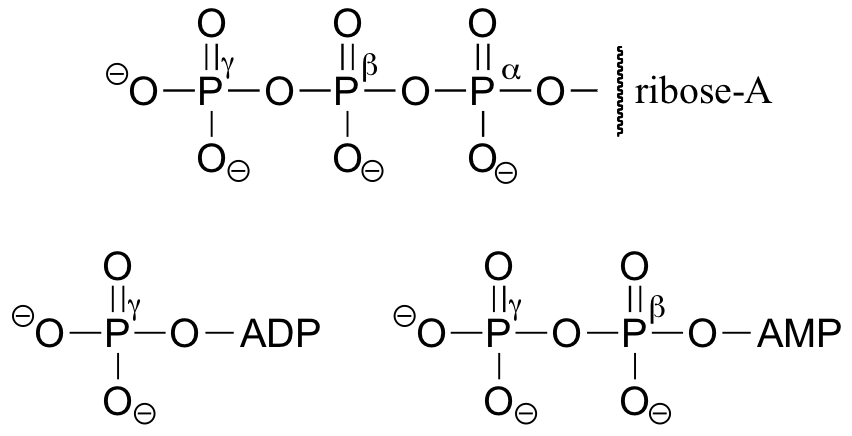 The following exercise will give you some practice in recognizing different abbreviations for biological molecules that contain phosphate groups.

Solution
Template:ExampleEnd
You are probably familiar with the physiological role of ATP from your biology classes - it is commonly called 'the cell's energy currency'. What this means is that ATP stores - for a very short time - some of the energy derived from the oxidation of fuel molecules like carbohydrates or fats (in plants and photosynthetic bacteria, the energy comes from sunlight). The energy in ATP is stored in the two high-energy phosphate anhydride linkages. 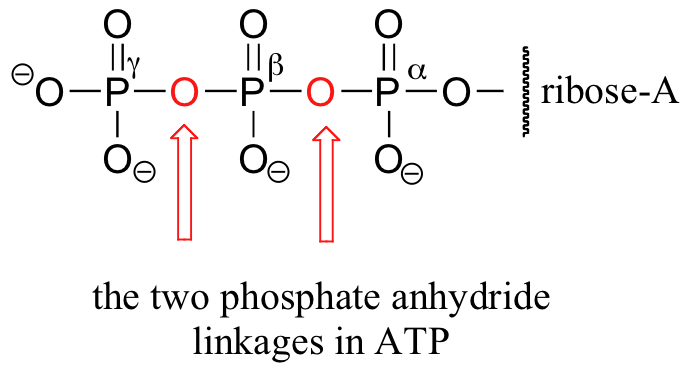 When we speak of the energy of an ATP molecule being 'spent', what we mean is that a phosphoryl group is being transferred from ATP to some other acceptor molecule, making the acceptor molecule more reactive. For example, in many phosphoryl transfer reactions (such as the phosphorylation of glucose, which we used as an example in section 10.1D) the gamma (γ) phosphate of ATP is transferred to an organic acceptor, releasing ADP. In other reactions, the base, ribose, and the alpha phosphate is transferred to the organic molecule to form an organic-AMP adduct, while inorganic pyrophosphate (PPi) is released. Occasionally, the beta and gamma phosphate groups are transferred together, with the release of AMP. In all of these reactions, a relatively stable organic molecule is being transformed into a higher energy phosphorylated product. This activated product can then go on to react in ways that its more stable, non-phosphorylated counterpart could not - phosphoryl groups, as we know, are much better leaving groups in nucleophilic substitution reactions than the hydroxyl group of alcohols. Even though the conversion of a lower-energy starting compound into a higher energy product is, by itself, a thermodynamically uphill process, the overall phosphoryl transfer reaction is thermodynamically downhill, because the conversion of ATP into ADP or AMP - the breaking of a phosphate anhydride bond - releases a great deal of energy. In other words, the energy stored in the phosphate anhydride bond of ATP has been 'spent' to create an activated (higher energy) molecule. When AMP or ADP is converted back to ATP, energy from fuel molecules (or from sunlight) is required to re-form the high energy anhydride bond (this process is the subject of discussion later in this section)

The explanation for why the phosphate anhydrides linkages in ATP are so energetic lies primarily in the concept of charge separation. Recall from section 10.1 that ATP, at the physiological pH of ~7, is almost completely ionized with a total charge of close to -4. When one of the two anhydride bonds is broken, the negative charges on the phosphate groups are able to separate, eliminating some of the same-charge repulsion that existed in ATP. One way to picture this is as a coil springing open. Another reason has to do with the energy of solvation by water. When the gamma phosphate of ATP is transferred to an alcohol, for example, surrounding water molecules are able to form more hydrogen-bonding interactions with the products (ADP and the organic phosphate) than was possible with ATP and alcohol. These additional solvation interactions stabilize the products of the phosphorylation reaction relative to the starting compounds.

You will learn more about the thermodynamic role of ATP in metabolic pathways if you take a class in biochemistry - what is most important to understand at this point is that, because of the energy stored in its phosphate anhydride bonds, ATP is a powerful phosphoryl group donor, and is used as such in many important biochemical reactions. Some examples are discussed in the remainder of this section. Now, when the 6-carbon sugar breaks into two 3-carbon pieces, each piece has its own phosphate group (the carbon-carbon bond-breaking step is a reaction that we will learn about in section 13.3C). The biological activity of many proteins is regulated by means of a very similar phosphorylation reaction catalyzed by protein kinases. In these reactions, the side chain hydroxyl groups on serine, threonine, and tyrosine residues of certain proteins are modified with the gamma phosphate from ATP. 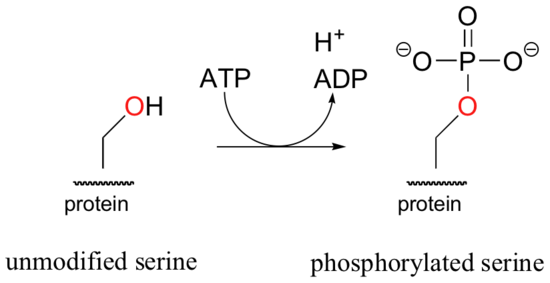 Notice the new " ATP in, ADP out" notation used in this figure, showing that ATP is converted to ADP in the course of the reaction. From here on, we will frequently use this shorthand convention to indicate when common molecules such as ATP, water, or phosphate are participants in a reaction, either as reactants or products.

Template:ExampleStart
Exercise 10.3: draw a mechanism for the kinase reaction above, using appropriate abbreviations for ATP and ADP.
Solution
Template:ExampleEnd
The conversion of a neutral hydroxyl group to a charged phosphate represents a very dramatic change in the local architecture of the protein, and thus it may behave very differently when phosphorylated, in terms of its overall conformation and ability to bind to small molecules or other proteins. A protein's biological function, whatever that may be, may be turned 'off' until the phosphorylation of a specific serine, threonine, or tyrosine serves as an activating 'on' switch (or vice-versa). In order to reverse the process and 'flip the switch' again, the phosphate group must be removed by a phosphatase enzyme, a reaction which we will examine later in this chapter (section 10.3).
Template:ExampleStart
Exercise 10.4: Threonine kinase catalyzes the phosphorylation of the side chain hydroxyl group of threonine residues in proteins. Draw the structure, including the configuration of all stereocenters, of a phosphothreonine residue. Explain how you can predict the stereochemistry of the side chain.
Solution
Template:ExampleEnd

We have just seen how alcohol groups can be converted to monophosphates using ATP as the phosphate donor. In some biochemical pathways, the next step is the addition of a second phosphate group to form a diphosphate. In the early stages of the biosynthesis of ‘isoprenoid’ compounds such as cholesterol, for example, two phosphates are added sequentially to a primary alcohol group on an intermediate compound called mevalonate. The first phosphorylation is essentially the same as the reactions described in part B of this section.

In the second phosphorylation reaction, the gamma phosphate of a second ATP molecule is transferred to an oxygen atom on the first phosphate, forming a new phosphate anhydride linkage.

Another example of a diphosphorylation reaction takes place in a single step, rather than sequentially. Phosphoribosyl diphosphate (PRPP) is a very important intermediate compound in the biosynthesis of nucleotides and some amino acids, and is the product of the diphosphorylation of ribose-5-phosphate. In this reaction, two phosphate groups (the beta and the gamma) are transferred together from ATP to a hydroxyl on ribose-5-phosphate. Notice that the beta phosphorus of ATP is the electrophile in this case, rather then the alpha phosphorus. Consequentially, the reaction results in the conversion on one ATP to one AMP, rather than two ATPs to two ADPs.

Are we getting more for our 'ATP money' in this one-step diphosphorylation? Not really - in order to convert the energy-poor AMP back up to the energy-rich ATP, the cell first has to transfer a phosphate from a second ATP molecule in a reaction catalyzed by an enzyme called adenylate kinase. So in the end, the diphosphorylation reaction still costs the cell two ATP-to-ADP conversions.

It is worth noting that both of the diphosphate groups produced in these reactions end up as leaving groups in subsequent nucleophilic substitution reactions. Mevalonate diphosphate is eventually converted to isoprenyl diphosphate, the substrate for protein prenyltransferase (section 9.3). PRPP is the starting point for the biosynthesis of both pyrimidine (C and U/T) and purine (G, and A) nucleotides. The SN1 displacement of pyrophosphate in pyrimidine biosynthesis is shown below.

Thus far we have seen alcohol oxygens and phosphate oxygens acting as nucleophilic accepting groups in phosphoryl transfer reactions. Consider next the first step of the reaction catalyzed by the enzyme glutamine synthase:

Once again in this reaction, the gamma-phosphate of ATP is transferred to an oxygen acceptor - however in this case the acceptor is a carboxylate oxygen, and the product is an acyl phosphate. As we shall see in chapter 12, acyl phosphates are commonly referred to as 'activated carboxylates', and are primed to undergo reactions called 'nucleophilic acyl substitutions'.

Template:ExampleStart
Exercise 10.5: Draw a mechanism for the acyl-phosphate-forming reaction above, using appropriate abbreviations for ATP and ADP.
Solution
Template:ExampleEnd The resulting 'acyl adenosine phosphate', which is technically a phosphate diester, is another form of 'activated carboxylate' that we will learn more about in chapter 12.

For some interesting variations on the phosphoryl transfer reaction, consider the early steps of isoprenoid biosynthesis in bacteria (this is a completely different pathway than that mentioned in section 10.2C, which is operative in animals). In the first step, the oxygen of a monophosphate ester attacks the a phosphate of CTP (not ATP!) to expel inorganic pyrophosphate.

In step 2, a second hydroxyl group is phosphorylated in the normal way by an ATP-dependent kinase, and in step 3 that phosphate proceeds to attack the first of the two phosphates on the nucleotide diphosphate diester, expelling CMP and forming a cyclic diphosphate. Several more steps lead to the formation of isopentenyl diphosphate, the building block molecule for all isoprenoid compounds.

10.2F: Regeneration of ATP from ADP

Throughout this section we have seen reactions in which the energy contained in an ATP anhydride bond is 'spent', and ADP or AMP is formed as a result. In order to regenerate ATP, a phosphate group must be transferred to ADP, which is of course a thermodynamically uphill reaction requiring the input of energy from the breakdown of fuel molecules or, in the case of plants, from sunlight. By far the most important source of ATP regeneration is the enzyme ATP synthase, which catalyzes the direct condensation between inorganic phosphate and ADP.

Despite the apparent simplicity of the chemistry going on here, ATP synthase is an extremely large, complex, and fascinating enzyme, with multiple protein subunits and a intricate 'molecular motor' design. The reaction must be 'driven' uphill by using the energy from a proton gradient that is set up across the inner mitochondrial membrane. You will learn much more about this amazing biochemical machine if you take a course in biochemistry.

Two other reactions in the gycolytic (sugar breakdown) pathway also result in the generation of ATP from ADP, but these are minor physiological sources of ATP compared to ATP synthase. Phosphoglycerate kinase (named according to the reverse of the reaction shown below) transfers a phosphate from an acyl phosphate to ADP.

Note that here the leaving group is a carboxylate group.

We will revisit this reaction in section 13.1A.