Radical addition to compounds with carbon–carbon multiple bonds can take place by several reaction mechanisms. The most common of these is a chain reaction that is characterized by a bimolecular, chain-transfer step. This type of reaction governs addition to unsaturated compounds of radicals cen­tered on various carbon atoms in pyranoid and furanoid rings. These reac­tions are regiospecific and often highly stereoselective. Since most carbon-centered radicals, including those derived from carbohydrates, are nucleophilic, suc­cessful addi­tion requires an elec­tron-with­drawing substit­uent attached to one of the carbon atoms of the multiple bond. The primary limi­ta­tion placed on this type of addition reaction is that it is in competition with a hydrogen-atom abstraction reaction that causes simple reduction of the carbo­hydrate deriv­ative.

Addition reactions also can occur by unimolecular chain-transfer. ­This type of reaction also takes place with radicals centered on various carbon atoms in pyranoid and furanoid rings. Most of these reactions involve addi­tion of a carbohydrate radical to an allylic or vinylic stannane followed by loss of a tin-containing substituent. An advantage to this type of reaction is that competition with simple reduction can be largely avoided. A disadvan­tage is that 1,3-tin migration can occur in allylic stannanes; such migration places a synthetic limitation on the usefulness of the reaction.

Although the unsaturated compound in a typical addition reaction is a noncarbohydrate, addi­tion also occurs to unsaturated carbohydrates. The carbon–carbon double bond in such reac­tions usually is part of an enol ether or an α,β-unsaturated ketone or lactone and the product is often a C-di­sac­charide.

Most addition reactions to carbon–carbon triple bonds involve a tri-n-butyltin radical adding to a triple bond in a carbohydrate. The struc­tures of the carbohydrates are such that the vinylic radicals produced often under­go a cyclization reaction. 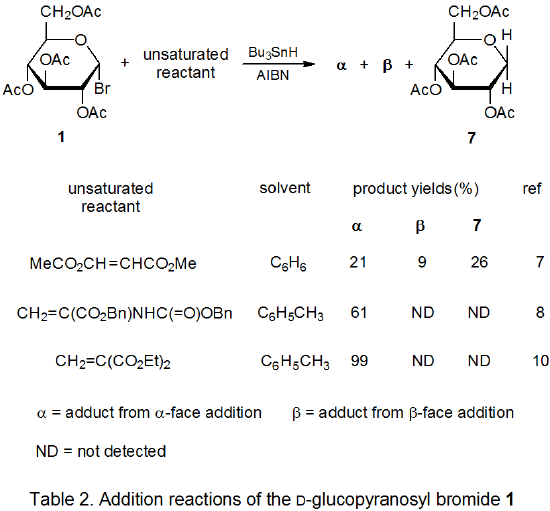 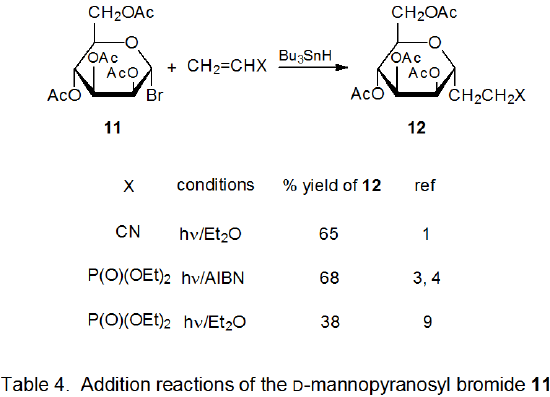