The early literature concerning the addition of hydrogen bromide to unsymmetrical alkenes at best is confused. Sometimes the same alkene was reported to give addition both according to, and in opposition to, the principles discussed for electrophilic ionic addition (Section 10-4). Much of the uncertainty on the addition of hydrogen bromide was removed by the classical researches of M. S. Kharasch and F. R. Mayo (1933) who showed that there must be two reaction mechanisms, each giving a different product. Kharasch and Mayo found, in the presence of radical inhibitors, hydrogen bromide adds to propene in a rather slow reaction to give pure 2-bromopropane:

With light, peroxides, radical initiators, and in the absence of radical inhibitors a rapid radical-chain addition of hydrogen bromide occurs to yield \(80\%\) or more of 1-bromopropane:

Similar effects have been noted occasionally with hydrogen chloride, but never with hydrogen iodide or hydrogen fluoride. A few substances apparently add to alkenes only by radical mechanisms, and always add in the opposite way to that expected for electrophilic ionic addition.

The ionic addition of hydrogen bromide was discussed in Section 10-4 and will not be considered further at this point. Two questions with regard to the so-called abnormal addition will be given special attention. Why does the radical mechanism give a product of different structure than the ionic addition? Why does the radical addition occur readily with hydrogen bromide but rarely with the other hydrogen halides?

The abnormal addition of hydrogen bromide is catalyzed strongly by peroxides, which have the structure \(\ce{R-O-O-R}\) and decompose thermally to give \(\ce{RO} \cdot\) radicals (see Section 4-5B):

The \(\ce{RO} \cdot\) radicals can react with hydrogen bromide in two ways, to abstract either hydrogen atoms or bromine atoms:

The two chain-propagating steps, taken together, are exothermic by \(16 \: \text{kcal}\) and have a fairly reasonable energy balance between the separate steps. The reaction chains apparently are rather long, because the addition is strongly inhibited by radical traps and only traces of peroxide catalyst are needed.

The direction of addition of hydrogen bromide to propene clearly depends on which end of the double bond the bromine atom attacks. The important question is which of the two possible carbon radicals that may be formed is the more stable, the 1-bromo-2-propyl radical, \(5\), or the 2-bromo-1-propyl radical, \(6\):

From \(\ce{C-H}\) bond-dissociation energies of alkanes (see Table 5-6), the ease of formation and stabilities of the carbon radicals is seen to follow the sequence tertiary \(>\) secondary \(>\) primary. By analogy, the secondary 1-bromo-2-propyl radical, \(5\), is expected to be more stable and more easily formed than the primary 2-bromo-1-propyl radical, \(6\). The product of radical addition should be, and indeed is, 1-bromopropane:

Other reagents, such as the halogens, also can add to alkenes and alkynes by both radical-chain and ionic mechanisms. Radical addition usually is initiated by light, whereas ionic addition is favored by low temperatures and no light. Nevertheless, it often is difficult to keep both mechanisms from operating at the same time. This is important even when the alkene is symmetrical because, although the adduct will then have the same structural formula regardless of mechanism, the stereochemical configurations may differ. Electrophilic addition of halogens generally is a stereospecific antarafacial addition, but radical-chain additions are less stereospecific.

There are many reagents that add to alkenes only by radical-chain mechanisms. A number of these are listed in Table 10-3. They have in common a relatively weak bond, \(\ce{X-Y}\), that can be cleaved homolytically either by light or by chemical initiators such as peroxides. In the propagation steps, the radical that attacks the double bond does so to produce the more stable carbon radical. For addition to simple alkenes and alkynes, the more stable carbon radical is the one with the fewest hydrogens or the most alkyl groups at the radical center.

Table 10-3: Reagents that add to Alkenes by Radical-Chain Mechanisms 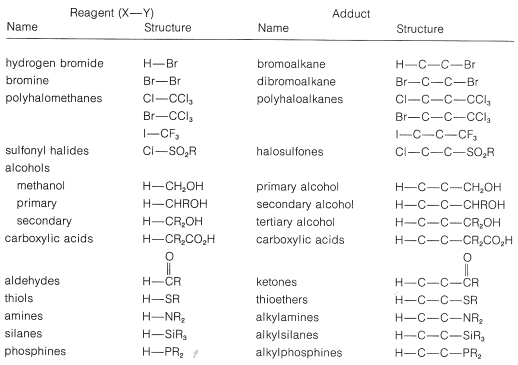